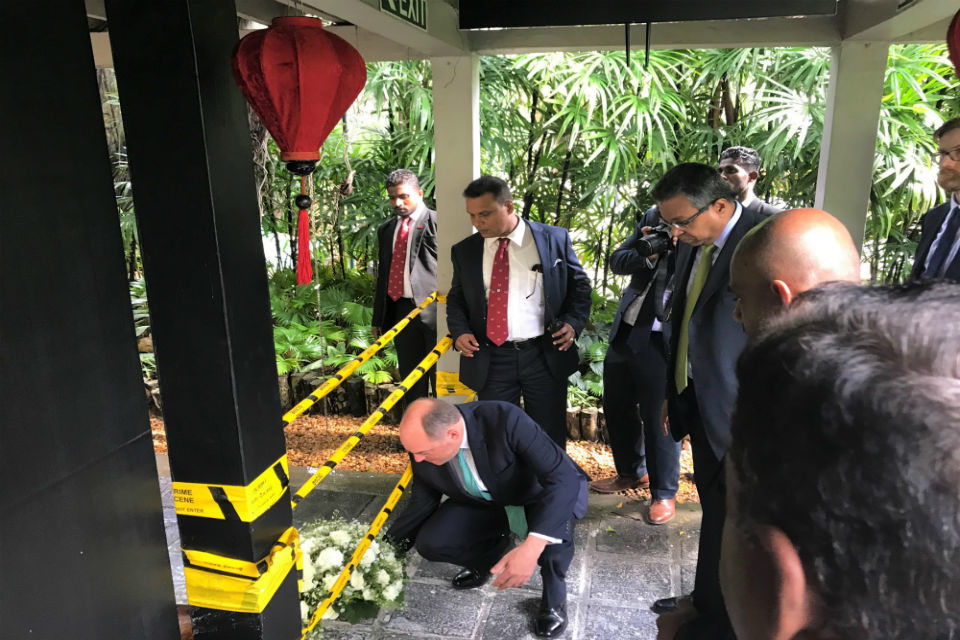 The UK Minister for Security and Economic Crime, Ben Wallace, is returning from Sri Lanka following a two-day visit.

The minister, who arrived on Thursday 2 May, visited to reiterate the UK’s condolences following the attack on Easter Sunday which killed at least 250 people, including at least 8 British nationals.

He discussed the impact on Sri Lanka, how to address the security threat, identify what further support the UK can provide and received an update on the ongoing investigations.

The minister visited the Cinnamon Grand and Shangri-La Hotels, sites where British nationals were killed in the attacks and met hotel staff, as well as visiting the St Anthony’s Shrine in Colombo. The minister laid wreaths at all three sites to pay respect to all those who had lost their lives.

The attack on innocent worshippers and people sitting down for breakfast on Easter Sunday sought to sow division and hate, and it must not be allowed to succeed.

In times like these friends support each other. I visited, on behalf of the UK government, to offer that support and stand in solidarity with the Sri Lankan people.

I was deeply moved to visit the hotels and St Anthony’s Shrine, and to see the impact of the attacks. They must only serve to strengthen our resolve to work in partnership with countries around the world to counter the global terrorist threat.

As part of my visit, I have discussed our current travel advice and been clear that we hope to see the Sri Lankan tourism industry return to full strength. We will do all we can to help the Sri Lankan authorities with this.

The minister also met the UK police officers who have travelled to Sri Lanka and the consular staff at the British High Commission in Colombo who supported and continue to support British nationals in the country.

The Metropolitan Police counter-terrorism command dispatched a team of specialists to Sri Lanka, including family liaison officers, to support the families of British victims and assist with the repatriation of deceased British nationals.

They have also appealed for people who have returned to the UK from Sri Lanka to share with them any footage or images they have captured. Videos and pictures can be uploaded online.

Anyone who was impacted by terrorist attacks, including witnesses and families of victims, can find information about the support available on GOV.UK.