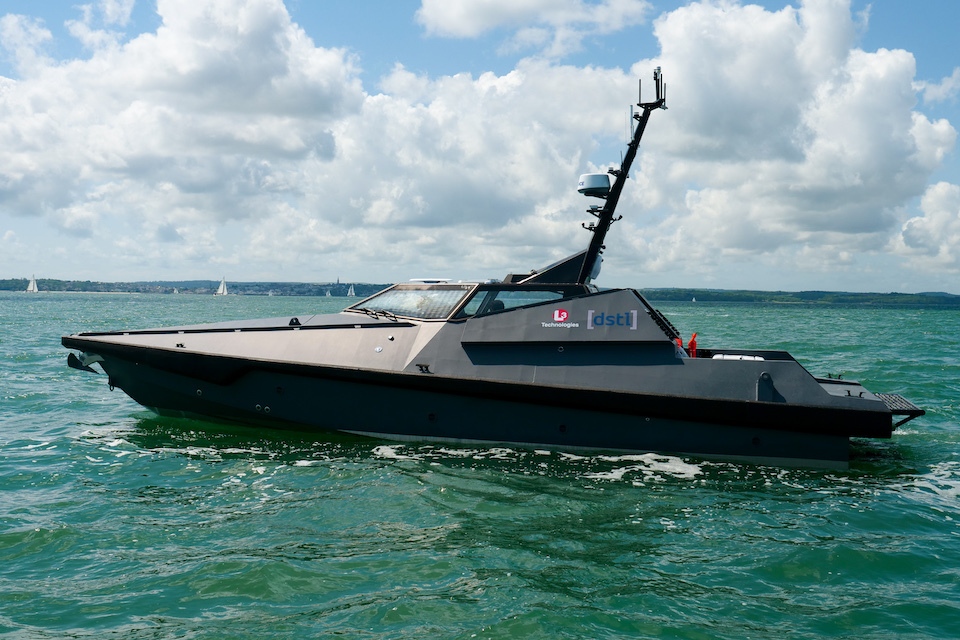 The new system is similar to a water-borne drone. At 13 metres long, the vessel swims around a naval task force, while being remote controlled from a rig. The systems can be used to identify threats such as mines or collect intel on enemy ships.

The kit was put through its paces today in a demonstration at the Defence and Security Equipment International conference in London, where it protected HMS Argyll in a harbour force protection. The system, attached to PAC24 rigid inflatable boat, navigated the river bed, detecting possible threats and feeding information back to HMS Argyll. The demonstration was observed by Defence Secretary Ben Wallace.

“MAST-13 is pioneering the future of Unmanned Surface Vehicles for our world-leading Navy. The development of unmanned technology is vital for success in modern warfare, going beyond the capability of traditional ships to attack and defend in uncertain environments.

“As more advanced technology and new threats continue to evolve, collaborative technology development ensures we are constantly pushing the boundaries to give our armed forces the best capabilities possible.”

The new system has been unveiled as part of the Maritime Autonomy Surface Testbed (MAST) 13, a programme developed by the Defence Science and Technology Laboratory (Dstl) in collaboration with L3Harris. The purpose of MAST 13 is to further understanding of how Unmanned Surface Vehicles (USVs) can be used in defence.

USVs could offer a potent capability for the Naval fleet; increasing protection and information for the UK’s powerful war ships by detecting threats and operating beyond the visual line of sight.

“I am extremely excited about the technology developed for MAST-13 and its potential to enhance Naval capability. This builds on our existing autonomy capabilities, including the state-of-the-art Maritime Autonomous Platform Exploitation (MAPLE) software integration system developed by Dstl and industry partners.

I look forward to seeing the further developments in sensor and countermeasure technologies that this could enable, and the increased reach and lethality this will bring to our ships.”

MAST-13 will be demonstrating its capabilities alongside PAC24 – an unmanned autonomous vessel funded by NavyX, the Royal Navy’s innovation fund announced earlier this year.

“This has never been more relevant thanks to a global technology trend towards systems with higher levels of autonomy. This could buy us increased ‘sea control’. Harnessing autonomy will help us increase capability at affordable cost and in a faster time frame.”

Working with UK firm L3Harris (formerly ASV Ltd), MAST-13 was built utilising MOD’s core S&T Budget. Dstl will continue the concept development programme through a series of work packages aimed at supporting the Royal Navy through fast integration technology that the Navy can incorporate into their operations.

Positioned as an autonomy and lethality accelerator, NavyX, brings together the Royal Navy, Royal Marines, scientists, industry and engineers, working together to develop unparalleled new capabilities in far more rapid timescales than traditional procurement. By collaborating on innovative technologies, Dstl and the Navy are pushing the development of advanced maritime autonomy and potent unmanned systems.