What started as a lightbulb moment in university transformed into a budding business for 23-year-old Dominic Bonaker, the CEO of Odyssey Ltd, an up-and-coming web design agency. After finishing his studies, Dominic launched his business in 2018 and has since spent the last 18 months transforming his business dreams into a reality.

Dominic knew he wanted to be his own boss while studying for his Computer Software Engineering degree at Cardiff Metropolitan University. But his business journey did not quite take off as he expected. He soon realised that starting a business requires a bit more than just registering it with Companies House:

I set up my first company in my first year of university. I thought it just involved me saying ‘Okay, I’m going start a company’ and that was it and it was all sorted.

But that actually wasn’t the case. There were certain requirements that I had to follow as a director of a company. 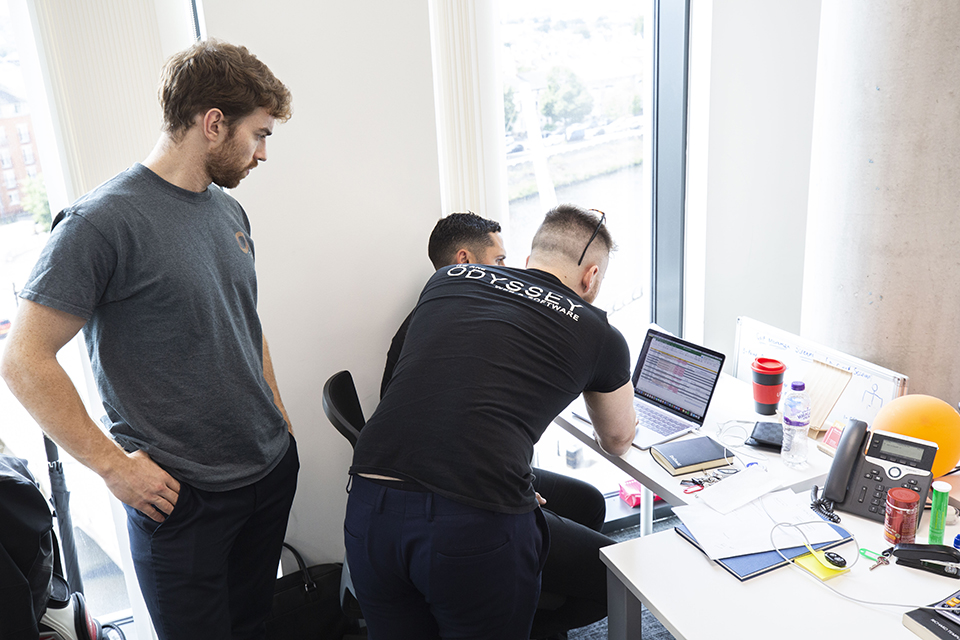 Launching a business can involve a lot of time and energy. As Dominic already had other commitments, he could not invest himself fully in the new venture. So, he decided to dissolve the company.

After a string of job interviews in his final year of study left him feeling underwhelmed about working for someone else, he decided to re-pursue the entrepreneurial career path. He launched his second company, Tech Tailors Ltd:

What began as Tech Tailors evolved into Odyssey Ltd. As the company gained momentum, it felt like it outgrew its original name, so I changed it with Companies House.

Odyssey was more of a fit because it means ‘journey’ and that’s something we feel we do for clients – we take them on a journey from nowhere to a beautiful website.

Every business journey is different. In Dominic’s case, he quickly realised that it was up to him to go out and find the networks and support he needed to make his business a success:

When I started out, it was pretty much just me. I didn’t know about any of the available help from other organisations. When it came down to it, I had to go online and Google to see what networking events were coming up and what support was out there, and there’s so much available that you don’t come across on a day-to-day basis.

That’s one thing that helped to boost Odyssey – me putting myself out there, meeting new people, seeing what kind of help I could get and going from there.

Interview with Dominic Bonaker, founder and CEO of Odyssey

Starting a business can come with multiple hurdles to jump, from finding the right office base to understanding the legal requirements and responsibilities expected of you as a company director. But one of the challenges Dominic faced was finding the capital to get things going:

When you’re a start-up, you may have a lot of expenditure and don’t have a lot of money coming in, and that was one thing that we did struggle with – but it’s all scalable. You’ve just got to remember that you start with one project but then you put that money back into the business and pay yourself as little as possible.

That’s exactly what I’ve done for the past year. You reinvest in the business.

After spending time reinvesting funds earned into his business, the business started to grow. Not only has he become a successful young entrepreneur, but he’s also taken up opportunities to encourage other aspiring business owners to take the plunge and start a business through his public speaking.

Although he wants to pass on as many learnings as he can to other young business owners, his top piece of advice remains simple: