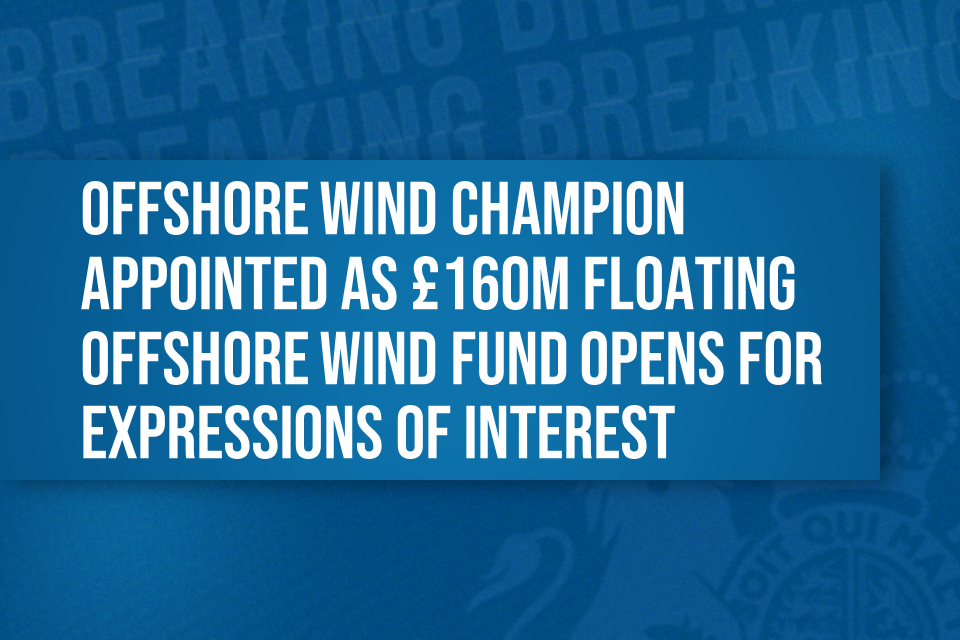 Ambitious plans to expand offshore wind around the United Kingdom to power homes and businesses with cheap, homegrown energy received a further boost today with the appointment of a new government champion and a multimillion-pound manufacturing fund opening for expressions of interest.

The Floating Offshore Wind Manufacturing Investment Scheme (FLOWMIS) will provide £160 million in government funding to boost floating offshore wind capability around the UK at sites in Scotland, Wales and elsewhere by supporting manufacturers and giving private investors the confidence to back this emerging sector which is expected to rapidly expand in the years ahead.

We are delighted to appoint Tim Pick as the UK’s first Offshore Wind Champion and begin the process of supporting British jobs and offshore wind manufacturers with £160 million of government funding.

Our announcement today represents another important step in our ambitious plans to accelerate offshore wind as a source of affordable, homegrown energy for the UK and drive down bills for households.

This Taskforce will bring together companies from across the offshore wind sector to coordinate their efforts, and speed up the further development of offshore wind power in the UK.

The appointment comes as the government today calls on industry for information on how best to invest the £160 million of support for floating offshore wind announced by the Prime Minister in October 2021.

The emerging UK floating offshore wind sector already has two operational projects generating power off the coast of Scotland at Hywind Scotland and Kincardine. The £160 million of funding will unlock further deepwater port infrastructure and support private investment in new factories to mass produce major components for floating offshore wind, with ambitions for projects off the coast of Wales.

15GW’s of floating offshore wind in Scottish waters has been announced through the ScotWind leasing round and a further 4GW is to be leased off the Welsh coast in the Celtic Sea which, combined, could require well over a thousand floating wind foundations. This will present the UK with a huge opportunity to establish a world leading sector capable of bringing down technology costs and delivering floating offshore wind at scale.

The Request for Information will help the government to understand the opportunities available in the UK and how we can most effectively support private investment.

The government announced in the British Energy Security Strategy its ambition to deliver up to 50GW of offshore wind by 2030, including up to 5GW of innovative floating wind, produced by turbines on floating platforms out in deeper seawaters, many off the coast of Scotland and Wales where it will build on these nations’ strong industrial and maritime heritage.

This expansion to 50GW will further attract vital investment to UK coastal communities, adding to the 60,000 direct and indirect jobs we estimate could already be supported by the offshore wind sector by 2030, and levelling up Scotland, Wales and the wider country.

It will help to reduce the UK’s reliance on expensive, imported fossil fuels, developing clean, affordably produced energy produced in the UK, for the people of the UK.

Until his retirement in April, Tim was Head of Energy, Resources and Infrastructure at law firm Freshfields Bruckhaus Deringer. Prior to joining Freshfields in 2013 he was head of Shearman & Sterling’s international Project Development and Finance practice.

Tim has more than 25 years’ experience of advising on the development of energy projects in the UK, the Eastern Mediterranean, the Middle East and beyond, including in the oil and gas and power generation industries. He was based in Abu Dhabi for around a decade, with the balance of his law firm career based in London.