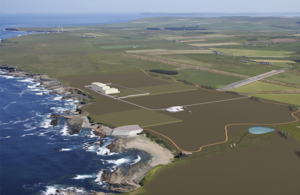 A key benefit of the UK government’s proposal to amend the legislative framework for nuclear sites (ref 22) is that operators will have greater flexibility to optimise site end states (SO46). The new framework will allow operators to balance the overall safety and environmental risks associated with remediation and consider a broader range of options in pursuit of the optimised solution.

Pressure on parliamentary time has delayed the necessary amendments to primary legislation. The NDA has continued to work with regulators (safety regulators, environment agencies and local authorities) and the UK government to identify secondary legislation and guidance that will be required to realise the full extent of benefits that the change is expected to deliver. This has included supporting the environment agencies with development of their GRR (ref 23). In particular, the GRR, issued in 2018, incorporates learning from trial applications of previous drafts at 3 NDA sites: Winfrith in Dorset; Trawsfynydd in north Wales; and Dounreay in Caithness, Scotland.

Magnox Limited and Dounreay Site Restoration Limited (DSRL) are optimising the site end state for the 3 ‘lead and learn’ sites because decisions about remediation are imminent. With the exception of Winfrith, it is not expected that the site end state will be achieved for many years. Therefore the focus is on defining an end state assumption in enough detail to inform the next interim state.

The existing end state assumptions were established in 2006 following the formation of the NDA. The recent reviews of end states at the 3 ‘lead and learn’ sites have all highlighted the importance of considering structures below ground (e.g. foundations and basements). All 3 sites have extensive subsurface structures. Excavating these structures would reduce contamination on site and allow immediate unrestricted use of the land, but transporting the waste to be disposed of below ground elsewhere would result in a number of impacts on people and the environment.

The reviews note risks to workers, the public and the environment associated with excavating substructures, transporting waste and importing fresh material to fill voids.

In September 2017, following a period of public consultation, Magnox Limited revised the site end state assumption for the Winfrith site to include leaving structures below ground at the 2 closed reactors (Steam Generating Heavy Water Reactor (SGHWR) and DRAGON), along with some ground contamination. The revision was informed by modelling that predicts land will be suitable for its next planned use (publicly accessible heathland) without removing the subsurface contamination.

Likewise, in March 2019, Magnox Limited revised the site end state assumption for Trawsfynydd to include leaving in place some of the lightly contaminated subsurface structures (e.g. subsurface portion of reactor bioshields and pond structures) and using concrete from demolition of above ground structures as infill for unwanted sub-surface voids. Assessments predict that as a consequence of radioactive decay and the natural degradation of contaminants, the associated land would be suitable for unrestricted use shortly after the existing ILW store has been demolished.

The Dounreay site is more complex. Consequently, DSRL has chosen to look at individual components of the site that together contribute to the site end state. These components include installations, current and future disposals, areas of land contamination, sub-surface structures and other discrete site conditions. Work will initially focus on the key components whose individual end states will have the greatest impact on the overall site end state. DSRL has reached the stage of updating the credible options for the site end state assumption at Dounreay.

These options are informing technical studies which, with the input of key stakeholders, will be used to identify an underpinned and optimised site end state assumption over the next 2 years. This assumption will be subject to an ongoing programme of optimisation.

Building on the work undertaken at the ‘lead and learn’ sites, Sellafield Limited and Low Level Waste Repository Limited (LLWR Limited) have begun to review and optimise the site end state assumptions for their sites. For the LLWR site, the end state assumption for the disposal area is largely defined by the Environmental Safety Case. Work has now commenced on considering the options for the remainder of the site to form a balanced, coherent solution for the whole site.

Site end state options are currently being developed and evaluated taking into account future disposal site operational requirements. These options will be discussed with stakeholders prior to adoption.

Sellafield Limited has initiated a programme of work to review the current site end state assumption, which makes reference to an inner and outer zone. Work is underway to identify credible options for the end state and then initiate assessment of these options. Sellafield Limited will work with stakeholders to ensure that the work is informed by the views of the community around the site. The first proposed steps are to improve on the end state assumption by: