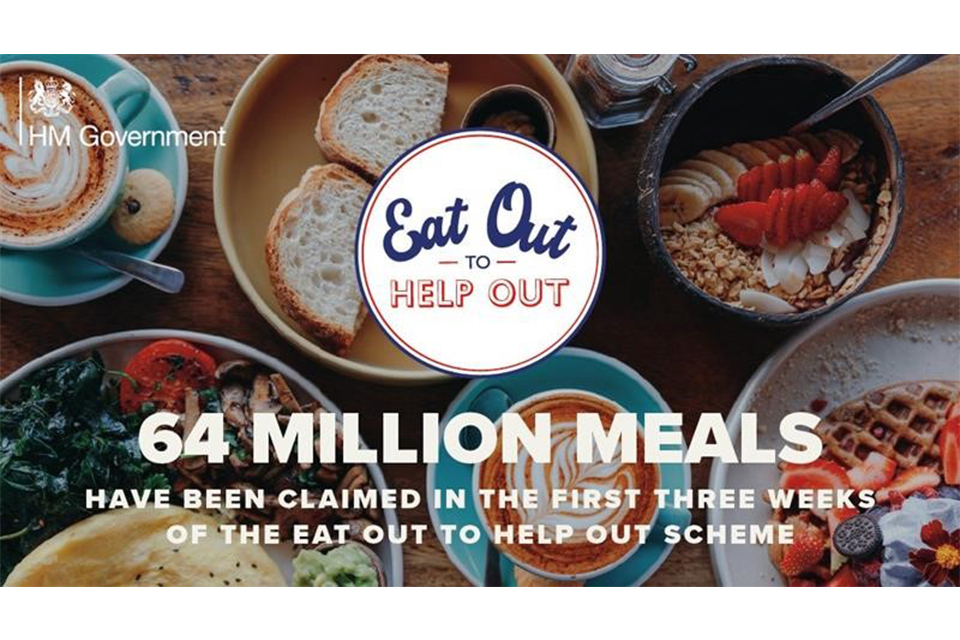 This continues the upward trend in the scheme’s popularity, with 10.5 million meals claimed for in the first week, growing to a total of 35 million meals in the second.

Data from OpenTable shows that during Eat Out to Help Out’s third week the number of customers at UK restaurants was 61% higher than the same days last year on average for Monday to Wednesday. The average level across Monday to Wednesday in the first and second week were 12% and 41% respectively.

The data also shows that the number of customers at UK restaurants was up 17% compared to the same week in 2019.

A total of 87,000 claims have been made by many of the signed-up businesses and there have been over 34 million searches on Eat Out to Help Out’s restaurant finder from 13 million unique users.

Today’s figures continue to show that Brits are backing hospitality – with more than 64 million meals discounted so far, that’s equivalent to nearly every person in the country dining out to protect jobs.

This scheme has reminded us how much we love to dine out, and in doing so, how this is helping to protect the jobs of nearly 2 million people who work in hospitality.

I am urging everyone, where they can, to continue to safely enjoy a meal while the scheme remains open.

There are now 84,000 sign-ups from restaurants for the scheme, which closes on 31 August.

The Eat Out to Help Out scheme aims to help protect the jobs of the hospitality industry’s 1.8 million employees by encouraging people to safely return to their local restaurants, cafes and pubs where social-distancing rules allow.

Around 80% of hospitality firms stopped trading in April, with 1.4 million workers furloughed, the highest of any sector.

The Government’s furlough scheme underpinned our effort to save as many jobs as possible at Franco Manca and The Real Greek.

This innovative policy was then followed by the Eat Out to Help Out scheme.

Eat Out to Help Out immediately increased our restaurant customer numbers by over 50%, thus enabling us to get all our staff back to work. In fact, we are now creating new jobs by hiring and training more people as fast as we can!

Rishi’s dishes have been a massive hit with customers and our staff. The tremendous success of the August scheme, combined with the temporary VAT reduction and fantastic support from our landlord community have made the difference between failure and survival of our business.

As a result of the Eat Out to Help Out scheme we have managed to avoid making any redundancies and we no longer have any of our 950 staff on furlough.

The scheme applies to all food and non-alcoholic drinks with participating establishments deducting 50% from the bill, up to a maximum discount per person of £10. It could save a family of four up to £40 per meal.

The scheme is one part of the Chancellor’s Plan for Jobs, announced last month. Other measures announced to protect, support and create jobs include cutting VAT for tourism and hospitality by 15%, a £2 billion Kickstart Scheme and an £8.8 billion investment in new infrastructure, decarbonisation and maintenance projects.

This support for the hospitality sector comes on top of the government’s unprecedented assistance for all businesses including through grants, tax deferrals, scrapping business rates, the furlough and self-employed support schemes and government-backed loans.