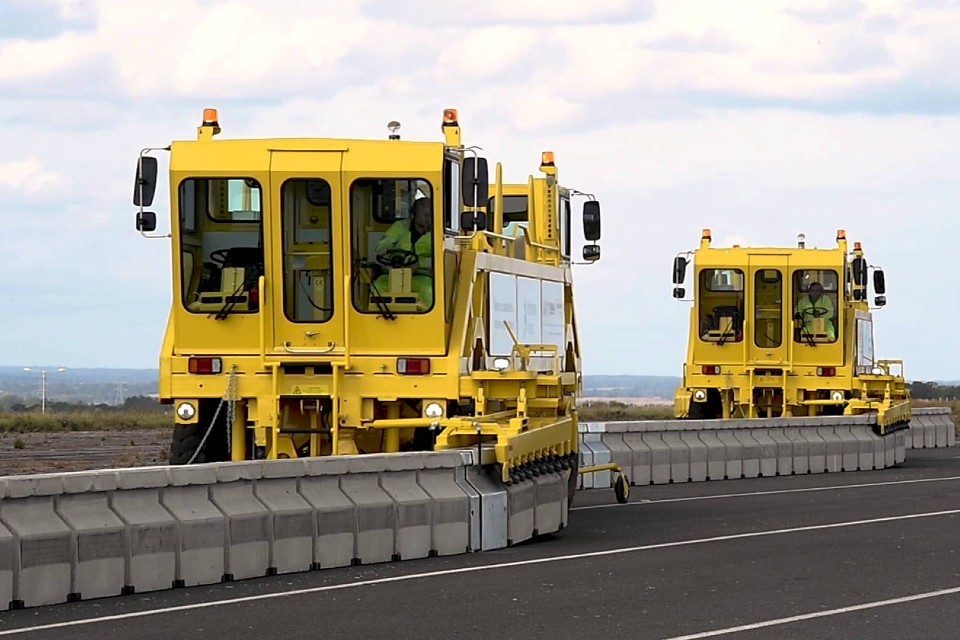 The plans are designed to keep Kent moving in the event of cross-Channel disruption, and are being tested between Friday night (11 December 2020) and Tuesday morning (15 December 2020).

Highways England and its partners in the Kent Resilience Forum will mobilise a moveable barrier system on a section of the M20 from 8pm on Friday 11 December. It will mean that parts of the motorway are closed between Maidstone and Ashford for four nights, with signed diversions in place.

The barrier will be used to create a new layout with a contraflow system. Once deployed, this will allow traffic to continue travelling in both directions on the motorway at the same time as port bound HGVs are queued, if necessary, on the coastbound carriageway until they can travel through to the Port of Dover or Eurotunnel.

The barrier is part of Operation Brock, a series of measures aimed at keeping the M20 open in both directions during periods of cross-Channel disruption. During the test the barrier will be installed and then removed.

To ensure that Highways England and its Kent Resilience Forum partners are ready to manage any disruption at the ports after the EU exit date, Operation Brock needs to be active by 31 December 2020. The live test is being used to review each stage of the deployment and removal of the barrier and the other traffic management needed for Operation Brock.

To make sure the barrier is deployed and removed safely, the M20 will be closed coastbound between junction 7 (for Maidstone) and junction 9 (Ashford), and London-bound between junctions 9 and 8 (Maidstone East), overnight (8pm to 8am) on Friday 11, Saturday 12, Sunday 13, and Monday 14 December, returning to normal operation by 8am on Tuesday 15 December. Whenever the M20 is closed, signed diversions will be in place.

At the end of the test the barrier will be returned to the London-bound hard shoulder.

What will the M20 look like during the trial?

The M20 will close in both directions overnight between junctions 7 and 9 (coastbound) and junctions 9 and 8 (London-bound) on Friday 11 December for the installation of the moveable barrier.

When the M20 reopens by 8am on Saturday 12 December, the contraflow will be in place in its initial phase. Drivers will need to follow the different layout on the M20 from just north of Junction 8 (for Hollingbourne/Leeds) to Junction 9 (Ashford). Lorries heading for mainland Europe will be routed down the coastbound carriageway, with a 30mph speed limit in place. All other traffic will be directed onto the contraflow, with two lanes in each direction operating at 50mph.

The M20 will close in both directions overnight between junctions 7 and 9 (coastbound) and junctions 9 and 8 (London-bound) at 8pm on Saturday 12 December and reopen by 8am on Sunday 13 December with the contraflow now open in its final phase.

The M20 will again close overnight between junctions 7 and 9 (coastbound) and junctions 9 and 8 (London-bound) at 8pm on Sunday 13 December for removal of traffic management on the coastbound carriageway.

The London-bound M20 will reopen by 8am on Tuesday 15 December, with the M20 back to its normal layout in both directions, with three lanes operating at the national speed limit.