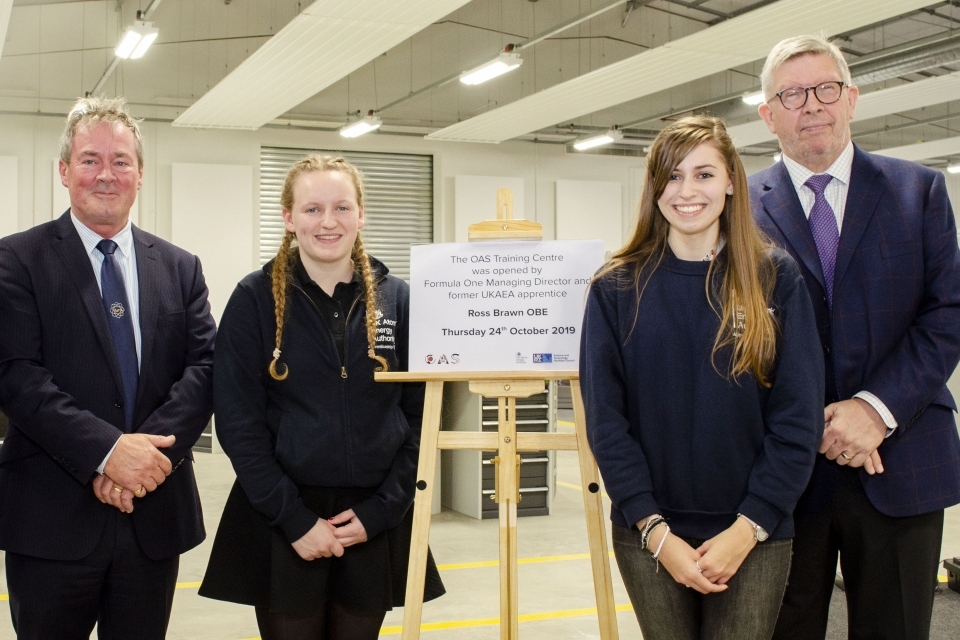 OAS – which has the capacity to teach up to 350 young people a year – aims to increase the number of technicians and engineers for local employers. This is in part to plug the high skills gap in the county, which is one of the UK’s leading areas for science and innovation. Already almost 20 hi-tech employers are benefitting from having technicians trained at the facility.

OAS is a partnership between the UK Atomic Energy Authority and the Science and Technologies Facilities Council. It opened in an existing building on the Culham site in 2016 but the purpose-built training complex will enable it to expand its programmes using state-of-the-art equipment.

Guest of honour at the opening event was Ross Brawn – who enjoyed a successful career in motorsport including at Benetton and Ferrari and is now Formula 1’s managing director.

He said: “I am truly delighted to be present at the opening of Oxfordshire Advanced Skills, and the place where it all began for me as a young apprentice at the UK Atomic Energy Authority.

“My time here provided me with the skills and experience I needed to go out into the wider engineering world, and it laid the foundation for the career path I have pursued.

“Apprentices are our next generation of designers, engineers and global problem solvers, and the importance of advanced skills training in the modern world – alongside facilities like the OAS – has never been so important.”

The new OAS building has industry-standard equipment covering a wide range of engineering and technology disciplines.

David Martin, OAS Director, and another former UKAEA apprentice, said: “The vision was an employer-led skills hub that would provide high quality training contextualised by being delivered in the workplace, but OAS is so much more than that. We have created something very special here that has the potential to impact careers and business performance for decades to come.”

Training at the centre is provided by the MTC Apprenticeships, based on the model they have successfully developed at their Coventry engineering skills academy.

Paul Rowlett, MTC Managing Director, said: “We are delighted to be working with UKAEA and STFC to deliver the Oxfordshire Advanced Skills training programme. There is a clear synergy and shared vision across our organisations.”

The next phase of OAS is already being planned. As well as extending the facility at Culham to cover robotics and power engineering training, OAS will add a skills centre at Harwell Campus for apprentices in the space sector as part of the rapidly growing Space Cluster there.