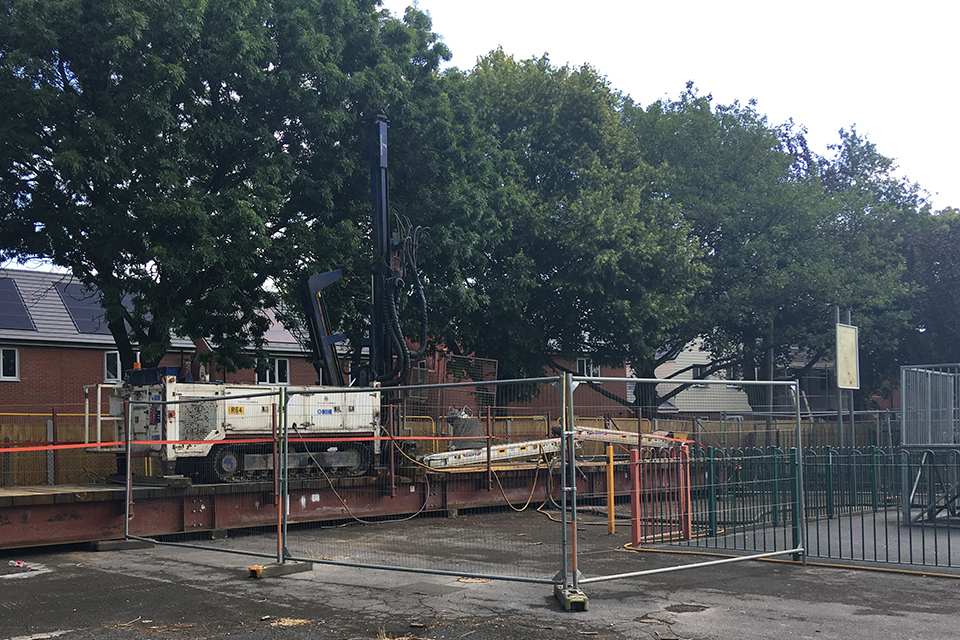 The play area in Ashmore Park, Wednesfield, had to be closed to allow repair work to be carried out on a 96 metre deep shaft that once served the former Ashmore Park Colliery.

The Coal Authority was called in by the City of Wolverhampton Council after it was discovered that snow had melted in a circular patch above the shaft, indicating that the fill within had settled to create an air pocket with an increased temperature.

Initial drilling investigations found a significant cavity in the top section of shaft, which made the decision on how to treat it safely more of a challenge.

Our engineers consulted a variety of other sources, including detailed abandonment plans for the colliery held in our archive and ground investigation reports provided by the council.

It was decided the safest way to carry out the works was to install a drilling platform to span the potential collapse zone and then treat the shaft by cementitious grouting.

The works, which were carried out by Soil Engineering Ltd and took a month to complete, began with the cavity being filled with 57 tonnes of gravel to minimise the risk of the shaft walls collapsing and give the drill rods something to drill through.

Then more than 200 tonnes of cement-based grout were used to create a 44 metre cementitious ‘plug’, making the shaft stable.

Coal Authority project manager James Walker said the repair proved to be an interesting project because of the engineering challenges found during the investigations. He added:

It took time to make the repairs because we had to plan how to undertake the works safely. But the shaft is now safe and the potential for it to collapse in the future has been removed.

In this video Coal Authority engineer Katherine Halfpenny, who designed the solution, explains more about the work:

Mine shaft in Ashmore Park play area made safe

Play area reopens in Wolverhampton after mine shaft is repaired