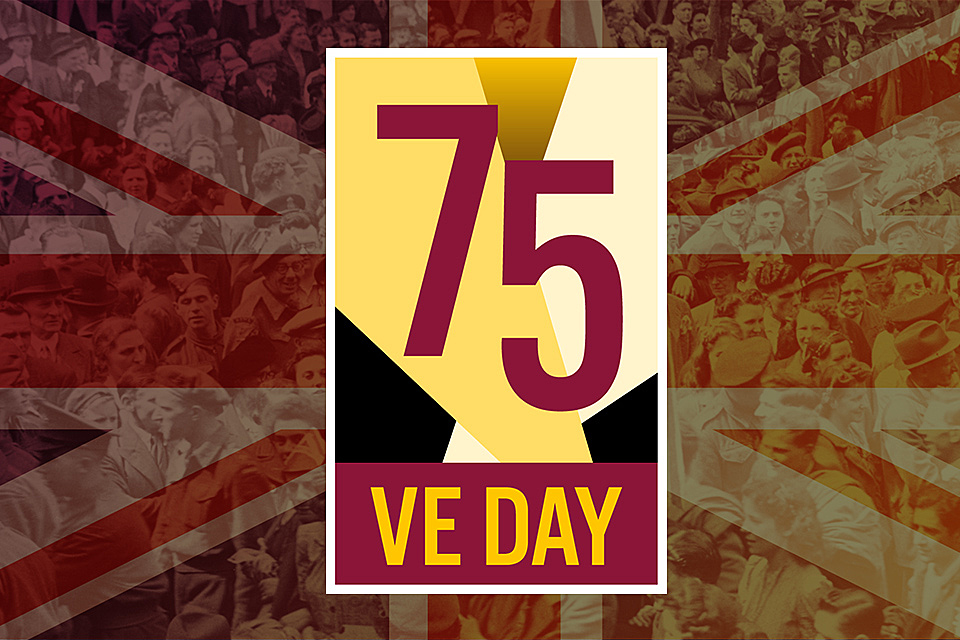 On 8 May a day-long series of events will take place across the UK to commemorate the Allied Victory in Europe and give thanks to the Second World War generation and the sacrifices they made securing peace across the continent.

The Prime Minister is also backing The Royal British Legion’s search for those from the Second World War generation who will take centre stage at the commemorations in London, culminating in a procession down the Mall. Applications are now open for veterans from the UK, Allied Forces and the Commonwealth, descendants, child evacuees and all those who contributed to the war effort – including those who served on the Home Front and in the emergency services – to take part in the events that will celebrate and give thanks for their role.

Other events include a Service of Remembrance and parade in Cardiff, a Veterans’ parade and concert in Edinburgh, and the opportunity for street parties to take place in cities, towns and villages across the country, recreating the national outpouring of thanksgiving that took place 75 years ago.

The 75th anniversary of VE Day marks a historic moment for our great country to come together and reflect on the heroes of the Second World War.

No one will ever forget what they sacrificed in defending our freedom and securing peace across Europe, and we will continue to honour those who contributed at home and abroad.

This programme of events gives the whole nation a chance to thank all those involved for everything they did – both for those alive today, and for future generations.

And by commemorating these moments, we can remember and remind ourselves of the fragility of peace, and the need for us all to collectively uphold this.

Commemorations will begin at Westminster Abbey with a Service of Thanksgiving attended by hundreds of veterans and representatives of the Second World War generation.

At 3pm, an extract from Sir Winston Churchill’s victory speech will be broadcast in public spaces across the UK recreating the iconic moment the Prime Minister announced the end of the war. This will be part of Imperial War Museums’ Voices of War, which includes a series of personal testimonies of people who experienced VE Day taken from the museums’ sound archive.

Second World War veterans and individuals that contributed to the war effort will then take part in a procession down the Mall. Events will conclude in a fly past that will include the Red Arrows and Battle of Britain Memorial Flight and other modern aircraft, followed by a tea party for veterans in St James’s Park.

Throughout the weekend, part of St James’s Park will be turned into ‘Victory Park’ where veterans and the public can experience themed events based on life in the UK during the Second World War. A nearby ‘Military Village,’ also situated in St James’s Park, will provide an opportunity for the public to meet serving military personnel who will be there with a display of modern military equipment.

The VE Day anniversary events will allow the nation to come together and celebrate the greatest generation which saved our nation from tyranny.

Our nationwide programme will tell the stories of those who served in the Second World War at home and abroad, and honour their memories as we reflect on 75 years since the Allies restored peace in Europe.

Members of the Armed Forces will be honoured to lead the nation in marking the 75th anniversary of the Victory in Europe in May. I hope as many veterans as possible can take their rightful place at the heart of the commemorations in London. We will always remember the selflessness and sacrifice of those who served at home and overseas, both in Europe and further afield, and pay our respects to those who gave their lives. The anniversaries of VE Day and VJ Day this year will commemorate the end of the war and remind us of the heavy price paid for peace.

To mark the anniversary of VE Day this year, the Legion is calling on communities across the UK to come together to honour the Second World War generation and recognise the scale of service and sacrifice made by those both at home and overseas.

We are inviting all those who contributed to victory in Europe who wish to attend these special commemorations to enter the ballot. In addition to events taking place in London it is equally as important for communities of all types across the UK to come together locally and put our Second World War generation at the heart of your events in recognition of their incredible achievements.

Last year the government announced the early May Bank Holiday would be moved to Friday 8 May so the public can take part in the nationwide commemorations and recreate the moment 75 years ago when the nation stopped to celebrate Victory in Europe.

In addition to a Bank Holiday, pub licensing hours will be extended until 1am on both Friday 8 May and Saturday 9 May 2020.

In the coming weeks the Government will announce major plans to commemorate the 75th anniversary of VJ Day, 15th August, which marked Victory Over Japan and the final end of the Second World War. Veterans of the Far East campaign will be at the heart of the commemorations as the nation thanks them for their service and sacrifice. Events will also pay tribute to the tens of thousands of service personnel from across the UK and the Commonwealth who fought and died in the war against Japan, including all those who were held as prisoners of war by the Japanese. A consultation will also be launched tomorrow (24 February) on extending licensing hours to mark the anniversary of VJ Day.