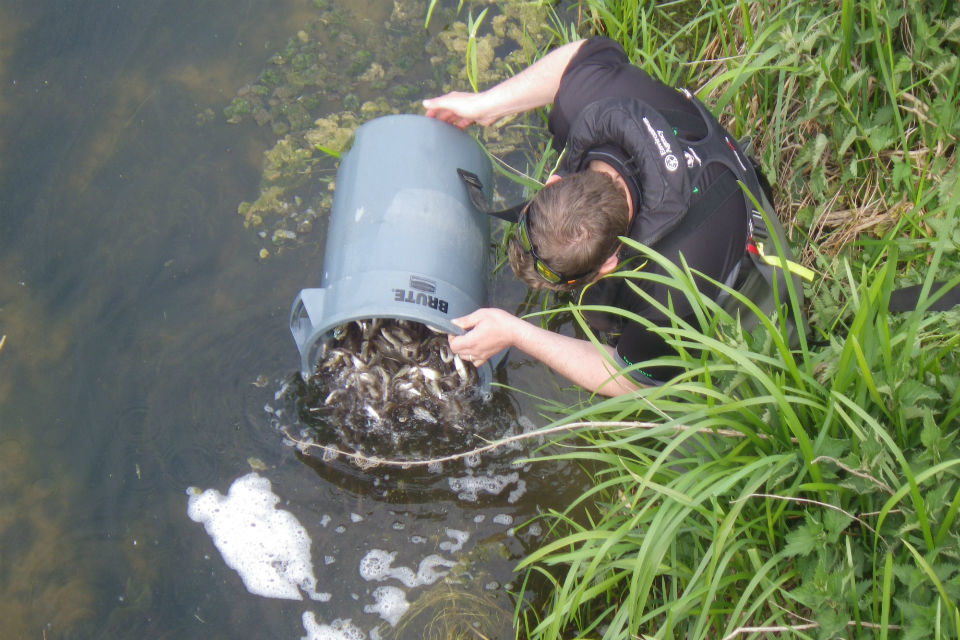 Around 34,000 fish have been released into the River Witham this week by the Environment Agency as part of ongoing efforts to help the river recover from the devastating pollution it suffered last spring.

The year-old roach and bream, measuring 5 – 10cm in length, were bred at the EA’s national coarse fish farm before being transported and released into the river by fisheries officers.

It brings the total of fish stocked back into the Witham in the last year to around 74,000, plus approximately 1.5 million larvae. Releasing high numbers of fish increases the chances that their populations will re-establish, as some will die naturally or be eaten by predators.

The restocking will help restore the river to its natural, healthy state following a devastating pollution last March, when ammonia badly affected the river and its ecosystems from Bardney to the Wash. The incident is thought to be the worst river pollution ever recorded in the county.

A river can take years or even decades to recover from such a serious pollution incident – but we’re doing everything we can to help return it to its former glory as soon as possible.

Reintroducing these fish will help restore the complex ecosystems and the natural balance of this precious river, although it will be a long process.

In December, the Environment Agency issued agricultural and fertiliser company Omex Agriculture Limited with a ‘notice of liability’ under the Environmental Damage (Prevention and Remediation) Regulations 2015.

The notice – only the second the EA has issued since the regulations came into place – requires the company to develop plans for repairing the environmental damage caused when ammonia entered the river in March 2018, killing more than 100,000 fish.

Meanwhile, the Environment Agency is continuing to investigate the circumstances of the pollution. Further action will be considered once the investigation is complete.

Anyone who suspects a pollution incident is urged to report it to the EA’s incident hotline on 0800 80 70 60.

The EA’s national coarse fish farm near Calverton, Nottinghamshire, is funded by money from fishing licence sales. Find out more about buying a fishing licence on the Environment Agency’s website.

Environment Crackdown on illegal angling in North East over B…