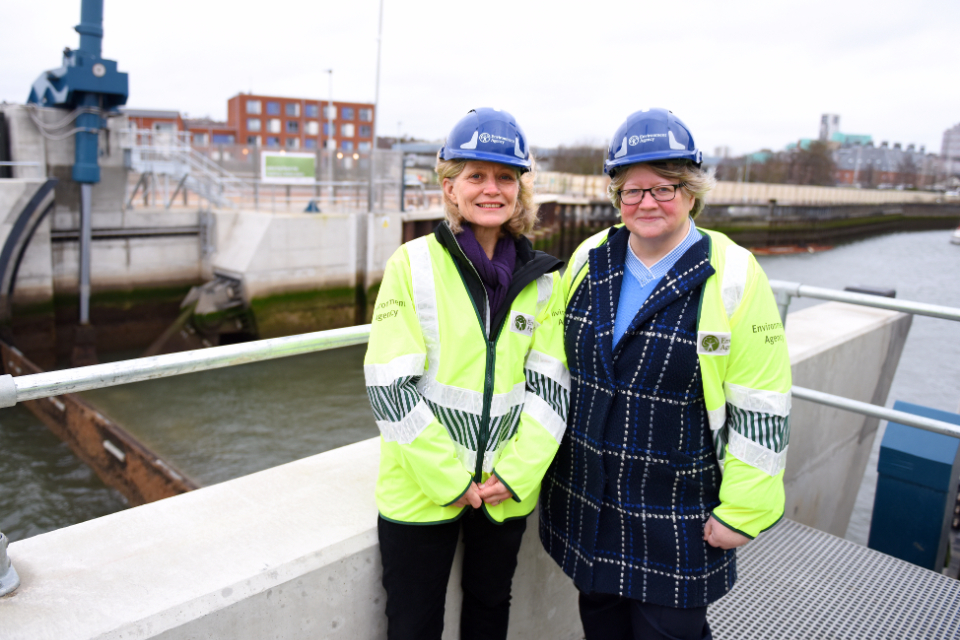 The Environment Agency’s new tidal flood defence barrier for Ipswich has been officially opened by Floods Minister, Dr Thérèse Coffey, ensuring more than 1,600 homes and 400 businesses are better protected from flooding and the impacts of climate change over the course of the next century.

Costing almost £70 million, the new flood defences centrepiece is a 200-tonne rotating barrier which can be raised in minutes, helping to keep the town safe from tidal surges during storms.

The flood gate has a design similar to that of the Thames Barrier and is so large that it is coated with 6 tonnes of protective paint. The flood gate rotates upwards out of the sea floor into the closed position, holding back dangerous tidal surges that could flood the town. The defence also includes 1,100 metres of new and refurbished flood walls and a series of flood gates on the banks of the River Orwell.

Now finished, the scheme will better protect homes and businesses in Ipswich over the next 100 years from the increased flood risks associated with climate change. The new defences will provide a much higher level of protection from the type of tidal surge which threatened the town in 2007 and 2013, both of which were close to spilling over the existing defences.

The government’s most recent climate change projections predict that sea levels could rise by up to 1.15 metres, increasing the risk of tidal surges affecting those living on the coast. This project will see Ipswich better protected not only for today’s flood risk but also for that faced by generations to come. Aside from the reduced flood risk benefits, Ipswich’s new flood defence scheme has the added advantage of helping to boost the local economy through freeing up hectares of land for regeneration.

Today, Dr Thérèse Coffey MP, Floods Minister at the Department for Environment, Food and Rural Affairs, and neighbouring MP for Suffolk Coastal, cut the ribbon to mark the official opening of the barrier at the eye-catching new control building on the waterfront.

This important new flood scheme, which has received nearly £55 million of government funding, over 80% of the total cost, will better protect over 1,600 homes in Ipswich from tidal flooding over the next 100 years.

The scheme will also secure the future of hundreds of local businesses whilst creating 4,000 jobs to boost the town’s economy. I am delighted the Government is investing so significantly in the county town of Suffolk and its future prosperity.

Climate change means increasing storms and rising sea levels all over the world. This flood scheme will help people and businesses prosper in a more resilient Ipswich over the course of the next century.

The Environment Agency worked closely with the local community, the council and businesses to design and build a scheme that provides a greater level of protection for the town. It’s an important step forwards for our six year, £2.6 billion flood investment across the whole country.

The opening event was attended by a number of representatives from project partners, including Ipswich Borough Council who helped to fund the scheme, the Ministry of Housing, Communities and Local Government, the Haven Gateway Partnership, and the New Anglia Local Enterprise Partnership.

It is good to see this major Ipswich project completed. The money Ipswich Borough Council provided towards this project was a significant investment by the council. I’m glad to see this very impressive piece of engineering is now doing its job of providing peace of mind for residents and businesses in Ipswich.

This government is committed to boosting economic growth across the whole of the UK and building a Britain fit for the future.

The Growing Places Fund continues to support key infrastructure projects designed to unlock wider economic growth, create jobs and support building new homes across England. I’m delighted that this £6.6m investment has supported the new tidal barrier in Ipswich, which is part of a significant package of works to upgrade flood defences along the River Orwell.

This scheme will help protect homes and businesses in Ipswich from the devastating effects of tidal flooding.

The flood defence scheme, which will reduce the risk of flooding to 1,608 homes and 422 businesses as well as key infrastructure, has been partnership funded by the Environment Agency (£54.6 million), Ipswich Borough Council through the Haven Gateway Partnership (£3.4 million) and the New Anglia Local Enterprise Partnership (£6.6 million), the Regional Flood and Coastal Committee (£1.7 million) and UK Power Networks (£1.1 million).

The scheme is a major step forwards for the borough council’s Core Development Strategy for Ipswich and will release land for development helping to create an estimated 4,000 jobs.

Environment Raising awareness of mental health issues in the …
0
✖