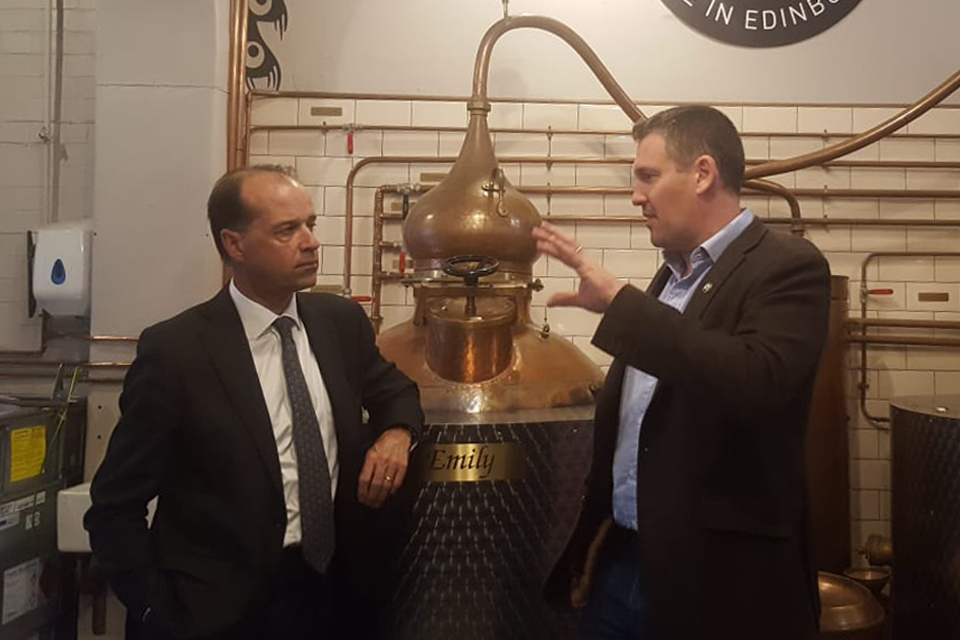 The UK government and Scottish Chamber of Commerce are today calling on Scottish businesses to make their voices heard in post-Brexit free trade agreements.

The Department for International Trade has announced that the Scottish Chamber of Commerce will represent Scottish businesses on the government’s new Strategic Trade Advisory Group.

The group, which is chaired by Trade Policy Minister George Hollingbery, will meet at least 4 times a year. It will advise the government on future trade policy issues, including on future trade agreements with the USA, Australia, New Zealand and potential accession to the Trans-Pacific partnership, a group of 11 countries around the Pacific rim.

Membership of the group will be reviewed annually, and the government has committed to ensuring Scotland is always represented as it develops an inclusive and transparent trade policy that works for all regions and nations of the UK.

Speaking at the Scottish Council for Development and Industry (SCDI) Forum event in Edinburgh today, Minister Hollingbery said that future free trade agreements will be negotiated in the interest of the whole of the UK with input from Scottish businesses and the Scottish Government.

Scotland’s exports are going from strength to strength and Scottish businesses will play a major role in helping to forge stronger trading relationships as we leave the European Union.

We are committed to a transparent and inclusive trade policy that benefits the whole of the UK and we have made sure Scottish interests influence our trade negotiations through a permanent seat on our advisory group.

I encourage all Scottish businesses to make the most of our new partnership with the Scottish Chamber of Commerce and feed their views about our future trade policy in to their local Chamber.

Consultations on future free trade deals with the USA, Australia, New Zealand and a group of 11 Pacific nations received a large volume of input from businesses in Scotland.

An event attended by businesses and stakeholders in Edinburgh last September revealed strong support for new free trade agreements which would help expand access to key global markets for Scottish exports and businesses.

In such uncertain times, it is essential that Scottish businesses have a voice on the future of the UK’s trade policy. The Scottish Chambers of Commerce Network plays a central role in driving business growth across Scotland’s communities, with a significant focus on maximising international trade opportunities.

As part of our commitment to the Strategic Trade Advisory Group, we will represent the business views from across the Scottish economy as the UK seeks to secure new trade agreements. We will ensure Scottish businesses are ready and able to take full advantage of expanding their trading footprint in markets around the globe.

Protecting and strengthening our international trading relationships is essential for a more productive and inclusive Scottish economy.

We believe that a commitment to open, rule-based system of trade will deliver growth and prosperity, and we have been encouraging the UK to explore joining the CPTPP of growing economies.

We welcome this opportunity for Scottish businesses and civic organisations to discuss the UK’s trade priorities with Minister Hollingbery at our Forum. We have met regularly with the Minister and will continue to make the views of our members known to the UK and Scottish governments and the Strategic Trade Advisory Group to inform and influence future trade negotiations.

Scotland’s food and drink industry is a powerhouse of international trade, exporting 41 bottles of world-famous Scotch whisky every second. Two thirds of the nation’s whisky exports, worth £4bn annually, go to countries outside the EU, and the sector directly employs 40,000 people.

One drinks business taking advantage of markets worldwide is Pickering Gin, who export more than 25% of their outputs to markets including Australia, New Zealand, China and America. They employ more than 26 people at their site in Edinburgh.

As an ambitious young company, it is essential that we have the ability to grow our key export markets and take new opportunities as they arise. It is critical at this time that our government ensures we achieve the best possible trade deals with key nations in order that the UK can remain competitive within the export marketplace.

The UK’s devolved administrations have a direct interest in future trade agreements as we leave the EU and the UK government will continue to work closely with the Scottish Government, through regular policy roundtables, official meetings and public consultations to make sure any future trade deal works for the whole of the UK.