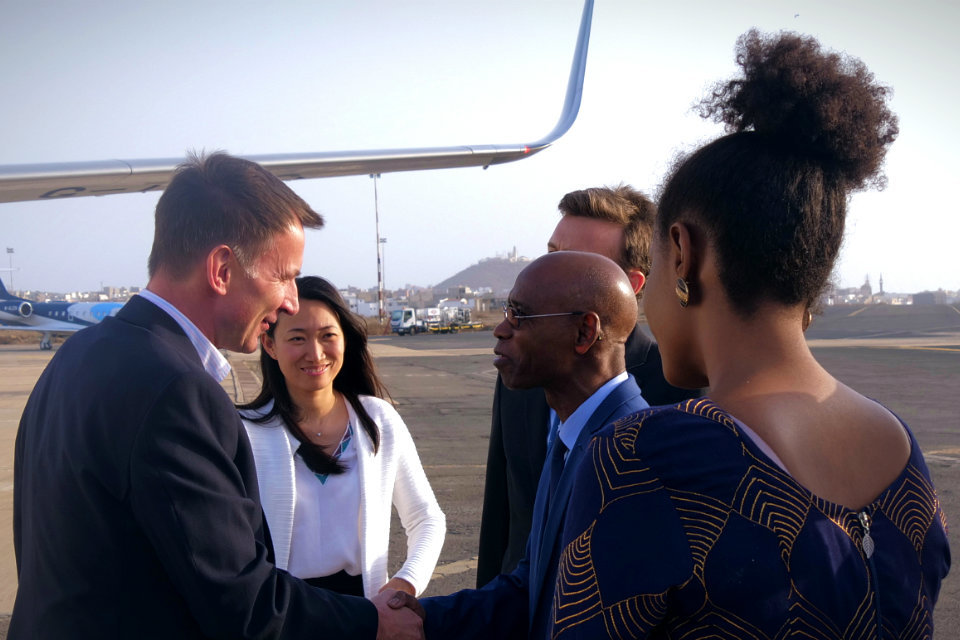 On the first visit by a UK Foreign Secretary to Senegal in nearly two decades, Jeremy Hunt will champion a new UK diplomatic push across the continent, including Francophone countries where Britain has traditionally played a smaller role.

Speaking on the first leg of a week-long trip, his first to Africa as Foreign Secretary, that will take in five countries – Senegal, Ghana, Nigeria, Ethiopia and Kenya – the Foreign Secretary will make the case for new UK partnerships across the continent.

Jeremy Hunt will officially launch the ‘English Connects’ programme at the Université Virtuelle du Sénégal in Dakar. Over the next two years, the programme will support the teaching and learning of English in sub-Saharan Africa countries where English is not widely spoken, with an emphasis on online learning. This British Council programme aims to reach 7.5 million young people each year.

The programme responds to the enormous appetite from young people across Africa to learn English to fulfil their potential. At the same time, it will connect the UK to African youth and future generations of leaders.

Africa is a continent growing at an extraordinary rate, full of transformative potential. In a future where Britain is no longer a member of the EU, I want us to work within and alongside African nations to make sure, together, we combat the threats we all face, and capitalise on the opportunities open to people wherever they live. To do this, I want to set out the stall for the UK to be the new partner of choice across Africa.

I know from personal experience that learning languages opens up new worlds of possibility for young people. There is an enormous appetite from young people across Africa to learn our language because English is the language of opportunity. That’s why we are providing new funding for English teaching to help many more young people access the possibilities that our language opens up, from London’s financial powerhouse to our world renowned arts and culture.

The British Council is delighted that the Foreign Secretary will launch English Connects in Senegal. I cannot think of a better time for the UK and Africa to be forging new connections based on mutual interest and prospects. English Connects is a groundbreaking, innovative programme that responds to the high demand for English in Non-Anglophone countries in Africa, and helps fulfil the aspirations and potential of young Africans.

The Foreign Secretary will also announce an agreement between the two governments, committing to strengthening trade and economic co-operation with up to £750 million available from UK Export Finance to support UK companies trading with Senegal and their Senegalese buyers. British investment in Senegal has grown significantly in recent years in oil and gas, renewable energy, mining and agriculture. BP is leading development of Senegal’s recently discovered offshore gas fields.

He will see first-hand the work of the Royal Marines who are helping Senegal’s naval special forces to build a capability that will protect the country’s new offshore oil and gas installations, including those being built by British companies BP and Cairn Energy.

The Foreign Secretary’s visit follows the announcement last year that Britain will open new embassies in Niger and Chad, and expand our footprint in Senegal, Cote d’Ivoire, Mali and Mauritania. This is part of a real increase in UK engagement and presence in the region and boosting trade between the UK and African countries, while helping address security problems in the Sahel and stepping up development work across the region.

Foreign Secretary Jeremy Hunt: UK wants to be partner of choice across Africa