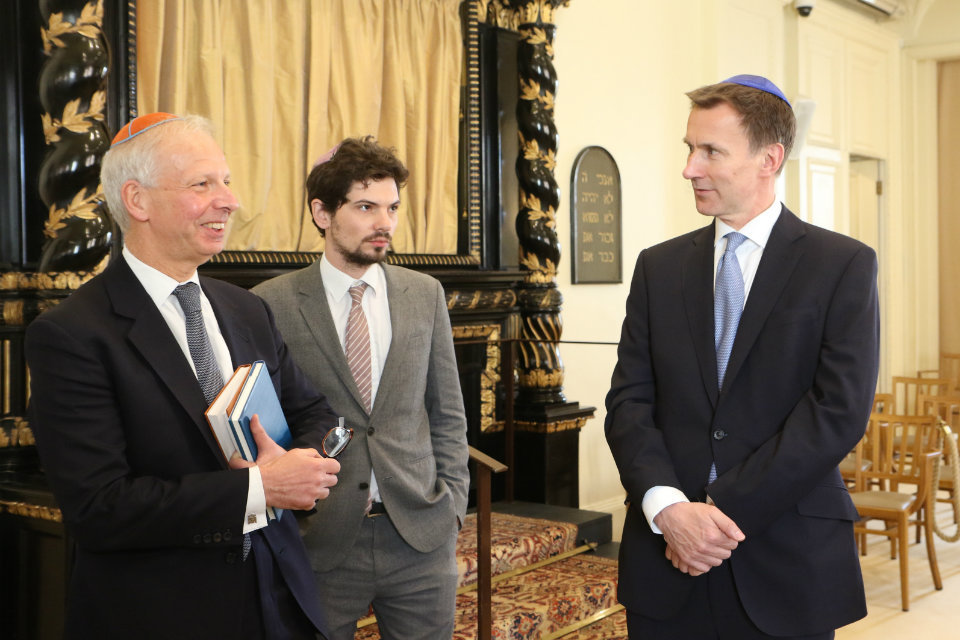 To celebrate the festival of Passover and highlight the UK’s strong commitment to the Jewish community the Foreign Secretary, Jeremy Hunt, visited Westminster Synagogue.

Mr Hunt was given a tour of the synagogue by Rabbi Benji Stanley, President of the Board of Deputies of British Jews, Marie Van Der Zyl, and synagogue Chair Lord Leigh of Hurley.

Speaking during the visit, the Foreign Secretary said:

It’s a great privilege to be here in Westminster Synagogue for Passover, a festival that celebrates freedom and liberation.

At Passover we look at the arc of history from ancient Egypt, to the Holocaust and the freedom of the modern state of Israel, a thriving democracy, and a huge achievement for all humanity.

As once again we face rising anti-Semitism, we must redouble our efforts to build mutual understanding, compassion and respect in our society, and honour the universal human right of Freedom of Religion or Belief for all.

The Foreign Secretary was also shown the synagogue’s collection of ancient Torah scrolls from Eastern Europe by Jeffrey Ohrenstein Chairman of the Czech Scrolls Museum. The scrolls saved during the Holocaust were from the Jewish communities of Bohemia and Moravia once centres of Jewish culture and completely devastated by the Holocaust.

Westminster Synagogue was delighted to welcome the Foreign Secretary to our sanctuary and the Czech Scrolls.

This is a very important time for the Jewish community as we celebrate Passover, our festival of freedom from tyranny, and the first steps towards the establishment of a Jewish home in Israel.

The Foreign Secretary has played his part in remembering the victims of the Holocaust and protecting Israel from unfair attacks. His warm greetings for Passover are greatly appreciated.

Following the visit, the President of the Board of Deputies of British Jews Marie van der Zyl said:

We are delighted that Foreign Secretary Jeremy Hunt came to Westminster Synagogue today to meet us and show his deep solidarity with the Jewish community.

His Passover address to our community and his warm words mean a lot to us.

Lord Ahmad was given a tour of the synagogue by Senior Rabbi of the S&P Sephardi Community Rabbi Joseph Dweck and synagogue chair Sabah Zubaida.