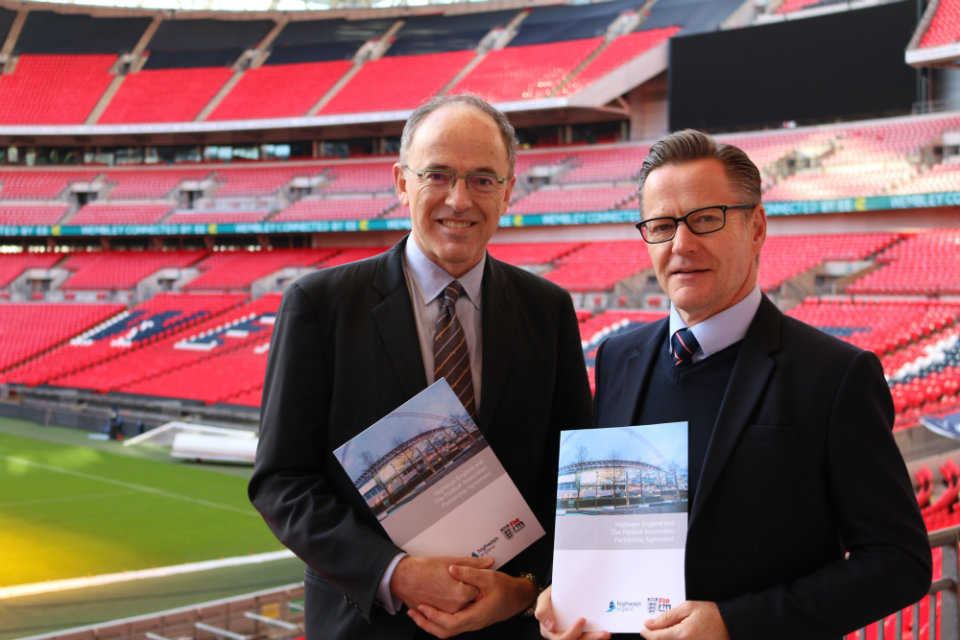 The two organisations are uniting to advise tens of thousands of drivers and passengers who head towards the national stadium for England games, cup finals, summer concerts, and more.

Many of these fans use the country’s motorways and trunk roads to get to the 90,000-seater stadium – the home of the Three Lions – including the M1, M4, M40 and Britain’s busiest motorway, the M25. Highways England will work with The Football Association (FA) to help drivers plan their journeys and warn them of any incidents, delays or congestion, using social media channels and the extensive array of digital messaging signs on motorway gantries.

We’re delighted that we can help motorists who are heading for major events at Wembley by joining forces with such an influential partner as The FA. By making joint use of our social media channels and variable message signs, we can provide the information that drivers want and make their journeys easier and safer.

We know that tens of thousands of fans use our major roads to get to Wembley, and now we can help them plan so that they get there on time, drive sensibly, and find out about any impact on their journeys from our multi-billion-pound programme of investment in improving and maintaining the country’s major road arteries.

Each and every event held at the national stadium plays host to thousands of fans who choose to travel via the country’s roads. It’s essential they are able to do so safely, in plenty of time and with access to constantly evolving travel information.

Highways England has already made significant strides to improve the event day experiences of these fans, so I am delighted the partnership has now been formally announced and look forward to working together in this area.

The safety of people who use and work on the motorway network is the number one priority for Highways England, and is helped by good journey information. A new safety campaign warns drivers of the dangers of tailgating, urging them not to be a Space Invader. Driving too close to the car in front is linked to one in eight road casualties, with more than 100 people killed or seriously injured ever year. Nearly nine out of ten drivers say they have been tailgated or seen it, and more than a quarter admit to doing it.

Highways England keep drivers informed with real time traffic information to help fans get to from Wembley safely. The organisation will tweet to inform road users of incidents and works on major roads leading to and from Wembley using @HighwaysSE and @ HighwaysEast. Further information about transport in the Wembley area will be tweeted by @WembleyStadium and @TfL. Highways England will also inform traffic broadcasters about any delays and incidents as they happen.

Having come agonisingly close to success at last summer’s World Cup in Russia, England kick off their qualifying for Euro 2020 when they host the Czech Republic on Friday 22 March. Wembley will host seven matches of next summer’s pan-European tournament, including the semi-finals and the deciding match.

Highways England is improving trunk roads and motorways across the country, including in the London region. Examples include an upgraded junction between the M25 and A2, east of the capital, that is due to open this summer. A £10 million package of improvements is planned for the Dartford Crossing and the multi-billion pound Lower Thames Crossing, due to open in 2027, will nearly double road capacity across the River Thames.

Kick-off for partnership aiming to get fans home safely