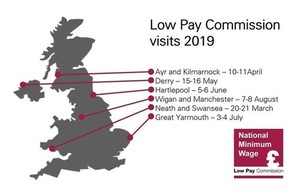 The Low Pay Commission (LPC) has announced its visits programme for 2019. It is looking to meet businesses and workers affected by the National Minimum Wage and National Living Wage.

These visits are a vital part of our evidence base – talking to employers and employees allows us to find out what is going on more quickly and to gather more detail than aggregate statistics can ever tell us.

The LPC organises an annual programme of visits to gather evidence in support of its recommendations to government. The visits are attended by members of the Commission and LPC Secretariat. The purpose of the visits is to hear first hand evidence from employers, workers and anyone else with a view on the National Minimum Wage rates and their effects.

The visit locations were chosen because most have a higher than average proportion of workers paid the minimum wage. The LPC also seeks to visit a combination of cities and more rural areas, and places with a different industrial make-up, to gain a rounded view of the effects of the minimum wage across the UK.

On the visits, the LPC hosts meetings and travels to businesses and workers at their place of work to see the effects of the minimum wage ‘on the ground’. Meetings with colleges, public sector organisations and charities are also welcomed.