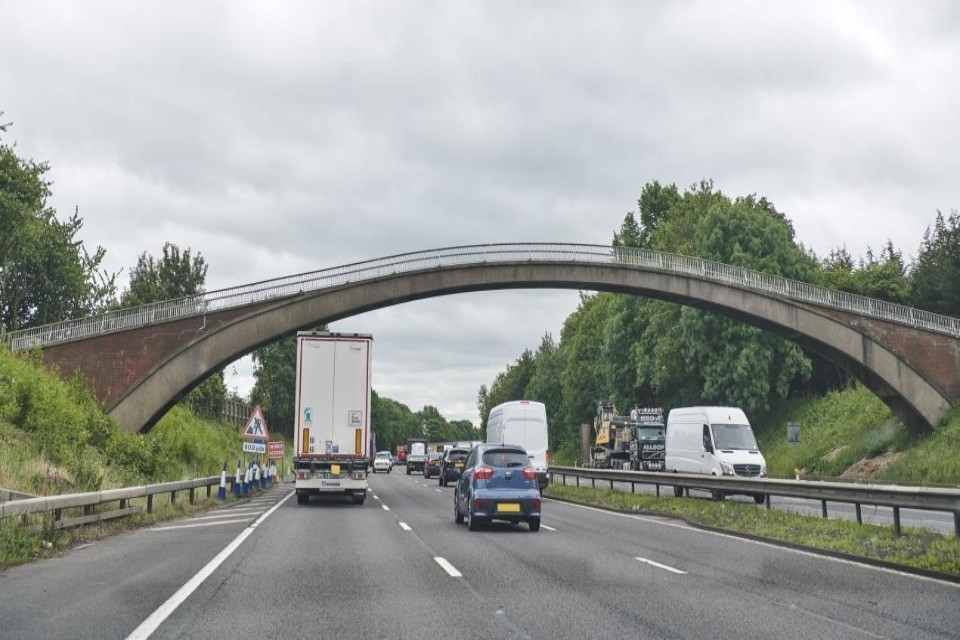 Highways England is removing the bridge as part of a major project to upgrade the motorway in Staffordshire.

The M6 will be closed in both directions, between junctions 13 and 14 at Stafford, for up to 18 hours over the weekend of March 23 and 24 while work takes place to remove the Burton Bank Footbridge.

The bridge, north of junction 13, was built in the early 1960s. Due to the curved shape of the footbridge, there isn’t enough headroom for HGVs to travel under the bridge when the hard shoulder becomes a new running lane.

The footbridge is nearly 200ft (60m) in length and weighs around 140 tonnes. In total it contains enough concrete to fill some 20 tipper trucks.

This will be the second bridge removed as part of work to upgrade the motorway between junction 13 (Stafford) and junction 15 (Stoke-on-Trent) after Creswell Home Farm bridge, just north of junction 14, was demolished last year.

The motorway closure will start on Saturday 23 March with significant lane restrictions from 5pm, leading into a full closure by 8pm. The motorway will reopen on Sunday 24 March as soon as work allows.

Drivers are being warned to expect delays from 5pm and are advised to plan alternative routes while work takes place.

To safely carry out the demolition of an arched bridge, which is a very complex process, we have to use both carriageways of the motorway so the M6 will be closed for up to 18 hours.

We will be doing all that we can to minimise disruption in the Stafford area.

I would urge anyone wanting to use the M6 in the area during the work to plan an alternative route and to allow extra travel time and fuel for your journey.

I would also like to thank motorists, businesses and residents in advance for their patience.

Traffic will be diverted off the M6 between junctions 13 and 14 and will use the A449 and A34 as the diversion route. This route has been agreed with local authority partners and will be kept clear of other works during the demolition.

To reduce M6 traffic on the day, signs will alert motorists to the closure as far away as Dover and Carlisle. Motorists and hauliers travelling between the North West and the Midlands and South of England will be advised to avoid the area by using the M62 and M1.

Transport HS2 could provide green energy to hundreds of new…
0
✖