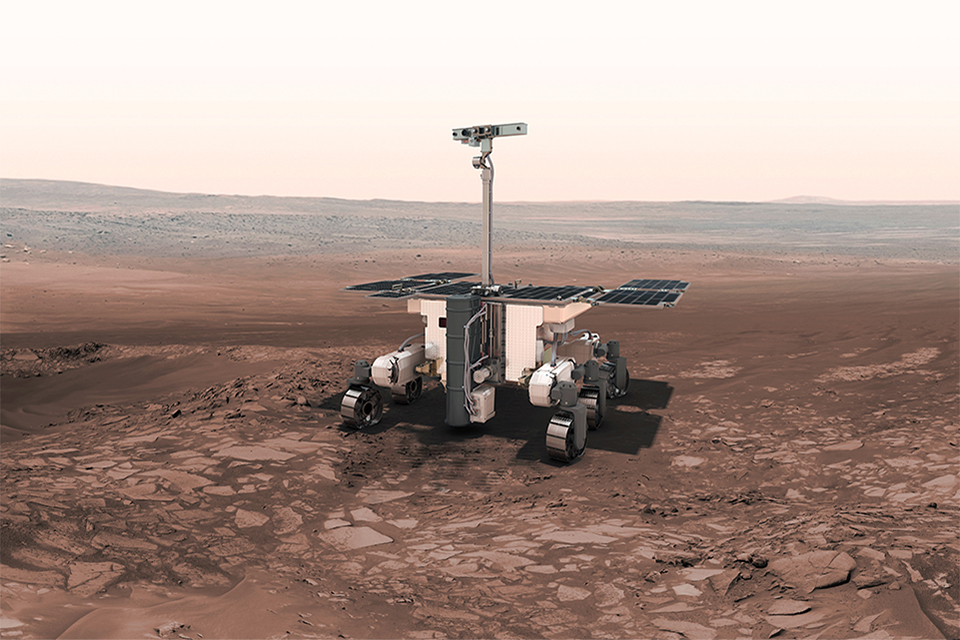 The name was revealed this morning by Science Minister Chris Skidmore and British European Space Agency (ESA) Astronaut Tim Peake in the ‘Mars Yard’ at Airbus Defence and Space UK in Stevenage, where the rover is being built.

It is a tremendously fitting tribute that the rover has been named after Rosalind Franklin as she helped us understand life on Earth and now her namesake will do the same on Mars.

Just as Rosalind Franklin overcame many obstacles during her career, I hope ‘Rosalind the rover’ will successfully persevere in this exciting adventure, inspiring generations of female scientists and engineers to come.

This is a big moment for British science and through our modern Industrial Strategy we are embracing this moment as part of our ambition to be the world’s most innovative economy, creating opportunities for business through science.

Rosalind Franklin is one of science’s most influential women, and her part in the discovery of the structure of DNA was truly ground-breaking.

It’s fitting that the robot bearing her name will search for the building blocks of life on Mars, as she did so on Earth through her work on DNA.

Over a third of the science instruments used in the ExoMars mission are led by women.

The UK Space Agency is the second largest European contributor to the ESA-Roscosmos ExoMars mission, having invested €287 million in the mission and £14 million on the instruments. This, in addition to successful negotiations with ESA, secured key mission contracts for the UK space sector.

‘Rosalind Franklin’ was chosen by a panel of experts from a shortlist submitted by the public, following a naming competition opened in July last year in which nearly 36,000 people responded. Competition entrants that guessed the final name were invited to the naming ceremony at Airbus where they met astronaut Tim Peake and had a tour of the facility.

This rover will scout the Martian surface equipped with next-generation instruments – a fully-fledged automated laboratory on Mars. With it, we are building on our European heritage in robotic exploration, and at the same time devising new technologies.

This name reminds us that it is in the human genes to explore. Science is in our DNA, and in everything we do at ESA. Rosalind the rover captures this spirit and carries us all to the forefront of space exploration.

Integration of the ExoMars rover, or rather Rosalind, has started here in Stevenage and the teams are now working round the clock in the sterile cleanroom to make sure she will be ready to fly next year.

ExoMars is the culmination of our industry experience over the last half a century where we have worked alongside academia and agencies to push the boundaries in space both for satellites and missions to other planets.

In November experts meeting at the National Space Centre in Leicester chose Oxia Planum near the Martian equator as the landing site for Rosalind due to its geology and the likelihood of finding signs of life.

The Government’s modern Industrial Strategy is backing businesses to succeed by increasing investment in science, because countries that invest in ideas create more opportunities for business. The ambition is for the UK be the world’s most innovative economy – and the development of the ExoMars rover for the UK is a part of this ambition.

Rosalind Elsie Franklin was a British biophysicist, physicist, chemist, biologist and X-ray crystallographer who made contributions to the understanding of the fine molecular structures of DNA, RNA, viruses, coal and graphite. She went to Newnham College, Cambridge in 1938 and passed her finals in 1941, but was only awarded a degree titular as women were not entitled to degrees at that time. She received a PhD from Ohio University in 1945.

Franklin is best known for her work on the X-ray diffraction images of DNA. Her data was a part of the data used to formulate Crick and Watson’s 1953 hypothesis regarding the structure of DNA. Unpublished drafts of her papers show that she had determined the overall B-form of the DNA helix. Her work supported the hypothesis of Watson and Crick and was published third in the series of three DNA Nature articles. After finishing her portion of the DNA work, Franklin led pioneering work on the tobacco mosaic and polio viruses. Franklin died from ovarian cancer at the age of 37, four years before Crick, Watson and Wilkins were awarded the Nobel Prize in 1962 for their work on DNA. Franklin was unable to receive the prize as Nobel Prizes cannot be awarded posthumously, but she received no mention in the acceptance speeches. Although Franklin’s contribution to the ‘discovery’ of DNA is now widely recognised, there remains a lingering sense that her contribution was unjustly overlooked and undervalued. Her contribution was not recognised in many science books until the 1990s. Courtesy of the Royal Society

The rover is part of the ExoMars programme, a joint endeavour between ESA and the Russian State Space Corporation, Roscosmos.

The main aims of ExoMars is to examine the geological environment on Mars and search for evidence of environments that may have once, and perhaps could still, support life. It will also assist in preparing for other robotic missions, including a Mars Sample Return mission, and possible future human exploration. Data from the mission will also provide invaluable input for broader studies of Martian geochemistry, environmental science and exobiology – the search for evidence of life on other planets.

As the first European rover to traverse the surface of Mars, Rosalind Franklin will uniquely drill down to two metres into the Martian surface allowing the rover’s scientific instruments to sample and analyse the soil, determine its mineral content and composition, and search for evidence of whether past environments could once have harboured life.

The rover will roam around the Martian surface by using electrical power generated from its solar arrays. The rover’s software will have a degree of ‘intelligence’ and autonomy to make certain decisions on the ground and will navigate using optical sensors.

The rover will relay data to Earth through the Trace Gas Orbiter, a spacecraft searching for tiny amounts of gases in the Martian atmosphere that might be linked to biological or geological activity since 2016.

Airbus Defence and Space in Stevenage is leading the build of the rover while the UCL Mullard Space Science Laboratory is leading on a key instrument known as the PanCam, a high-resolution 3D camera which will be used to look at the terrain and rocks to try to detect signs of life.

The University of Leicester and Teledyne e2v are working on the Raman Spectrometer with STFC RAL Space providing some of the electronics, including the data processing board.

Size of the ExoMars mission