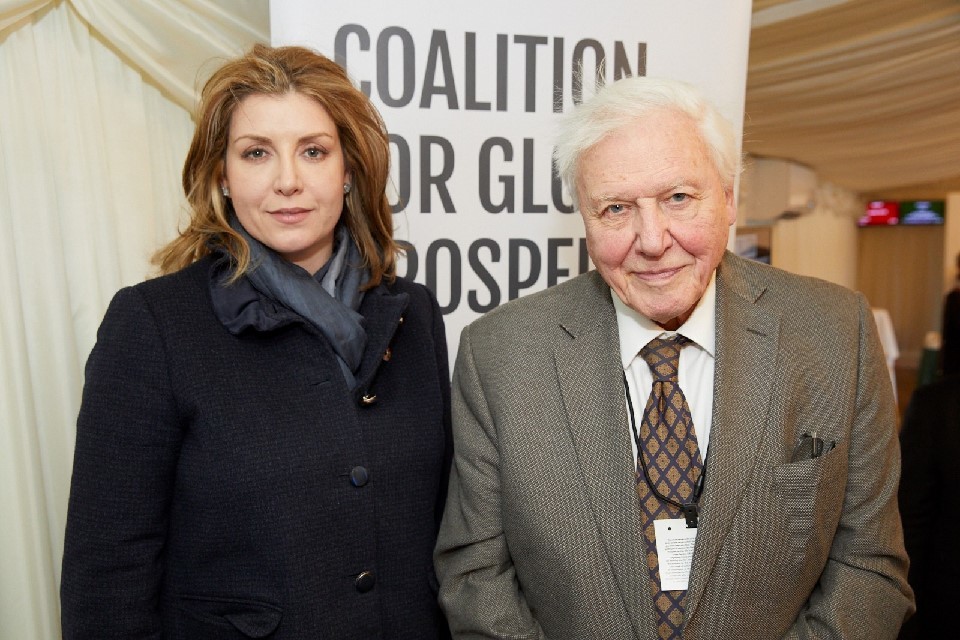 International Development Secretary Penny Mordaunt today (11 March) doubled UK aid support for plastic recycling in developing countries and called for solutions to clearing plastic waste from the world’s oceans and rivers, at an event in Parliament with Sir David Attenborough.

Ms Mordaunt was joined by Sir David Attenborough and MPs in Parliament on Commonwealth Day, where she spoke about the duty we have to our planet, to future generations and to the world’s poorest to “sort out” plastic waste. Ms Mordaunt made “crystal clear” that the UK’s aid budget will continue to be used to confront plastic pollution and that she wants to hear from scientists, tech entrepreneurs and business leaders for ideas and solutions to clean up plastic waste already in our oceans.

At an event, hosted by the Coalition for Global Prosperity, the All-Party Parliamentary Group on the Prevention for Plastic Waste and Plastic Oceans UK, Ms Mordaunt announced that the Department for International Development (DFID) will increase its UK aid support for pilot schemes to improve plastic recycling in some of the world’s poorest countries, from £3 million to £6 million.

Plastic pollution is one of the biggest threats to our oceans. The UN estimates that there will be more plastic in the sea than fish by 2050, unless we act to reduce our use and improve how waste is managed, particularly in poorer countries.

That’s why I am doubling UK aid’s support to projects in developing countries to increase plastic recycling. This will create jobs and reduce the harmful impact of plastic waste in our oceans. Cleaning up our environment is a win for us all.

During a speech in parliament Sir David Attenborough spoke of “the hideous consequences” of plastics “to both humanity and to life in the seas, upon which we depend” and mentioned the “shame” in the amount of plastics the UK produces. Sir David also questioned where all of the country’s plastic waste would end up.

The mismanagement of plastic waste on land accounts for most of the plastic pollution in our waters. Around two billion people lack access to basic waste collection which has ruinous impact on their health as well as killing wildlife in our oceans. The new funding will find ways of collecting and recycling more plastic waste to avoid it ending up in the oceans.

The UK aid-supported pilot projects, some of which have already begun in the Commonwealth nations of Ghana and Bangladesh, will work alongside global businesses like Coca-Cola and Unilever, governments, and waste collectors to increase the amount of plastic waste collected and reused. The aim is to connect responsible businesses with people who make a living collecting waste – often women living in poverty – to improve incomes and protect the environment.

The UK is a global leader in tackling the issue of plastic pollution. It has already banned microbeads in rinse-off personal care products and taken 15 billion plastic bags out of circulation with its 5p carrier bag charge in the last two years alone. It is now consulting on plans to extend the charge to all retailers and double the minimum charge to 10p.

Last year, the Prime Minister pledged £66.4 million to boost global research and help countries across the Commonwealth stop plastic waste from entering the oceans in the first place. The UK is co-chairing the Commonwealth Clean Oceans Alliance with Vanuatu.

Through the UK aid budget DFID has also:

We should be proud of the leading role that Britain has played in tackling plastic pollution both at home and abroad. I’ve seen first-hand the scale of the challenge when I visited Kissi Dump in Sierra Leone and heard from local campaigners about the challenges of how to build waste management and recycling systems in developing countries.

I saw rubbish being burnt in the street, thrown into the river or sea and heard stories about the related flooding and health problems. I was shocked to hear that globally two billion people don’t have their rubbish collected which leads to disease for people in poverty. Waste and plastic pollution is having a detrimental impact on people’s lives.

We can all do our bit to help the environment as after all, we only have one planet and we need to look after it for future generations. Tackling plastic pollution also helps to protect wildlife and to conserve our beautiful coastlines here in the UK and around the world.

During today’s event Ms Mordaunt also announced she is co-hosting a meeting with the Ellen MacArthur Foundation, the World Economic Forum’s Global Plastics Action Partnership, major brands, waste management companies and investors to start a conversation about how the global plastic supply chain can be made more sustainable.

The first trial waste recycling projects were launched in Ghana and Bangladesh last December. A Uganda project is due to be launched shortly. The new funding announced will extend the number of countries that we will carry out projects in.

The Coalition for Global Prosperity is a non-partisan, not-for-profit organisation that brings together political, military, business and faith leaders who believe that an effective development budget, alongside an active diplomatic and defence strategy, keeps Britain at the forefront of saving lives, alleviating poverty and bringing freedom, security and prosperity to those who need it most. CGP organises public and private events to explore the UK’s role as a global leader. For more information, visit www.coalitionforglobalprosperity.com

Plastic Oceans UK was the first charity focused on plastics and have been experts on the issue for nearly a decade. This began with their award-winning documentary A Plastic Ocean, available for streaming on Netflix. They are solving the plastic crisis through science, sustainability and education programmes.

The APPG on the Prevention of Plastic Waste is a parliamentary group which monitors the progress of the 25-year Environment Plan in relation to plastic waste, raises issues relating to the impact of plastic waste on our environment and provides a cross-party forum to work towards the minimization of plastic waste.