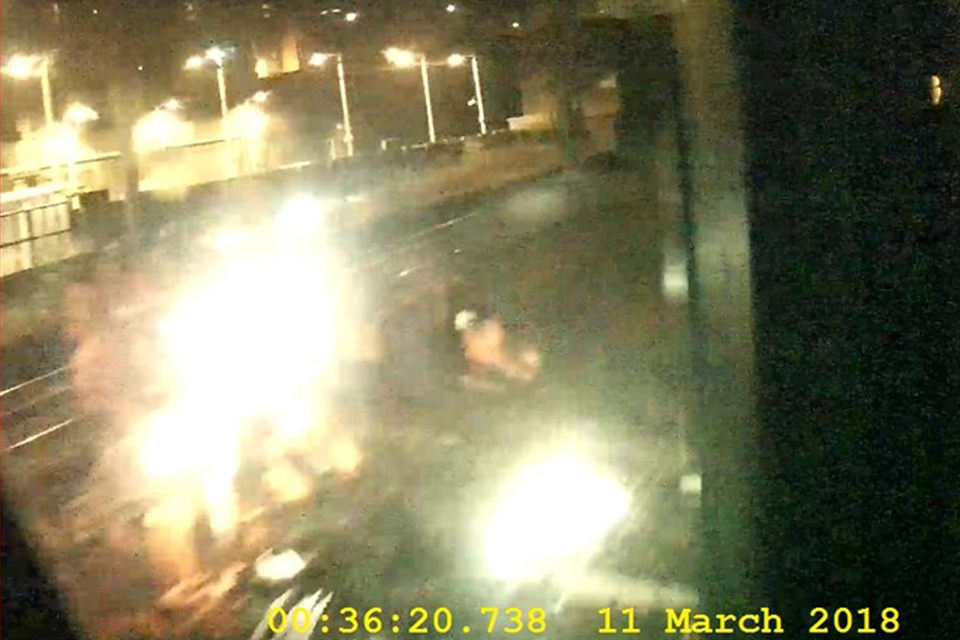 At around 00:35 hrs on 11 March 2018, a group of track workers narrowly avoided being struck by a train while placing trolleys on the track alongside South Hampstead station, north London. The train was travelling at 49 mph (79 km/h) towards London Euston station when the driver saw the group, sounded his horn and applied the brake. Three other members of the work group, who were around 100 metres away from the staff placing the trolleys on the track, saw the train seconds earlier and shouted a warning to their colleagues who managed to remove the trolleys and get clear around two seconds before the train passed. One member of the group received a minor injury and many were distressed.

The incident occurred because the track workers had placed the trolleys on a line which was still open to train movements, instead of on the intended adjacent line that was blocked. The RAIB investigation found that the safety arrangements that had been established were ineffective. The work group did not have anyone designated as the ‘Person in Charge’, an individual who has sufficient knowledge and competence, and is specifically appointed to manage all the risks associated with the work, including the danger from moving trains. There were also a number of unofficial working practices being used by the workgroup and the person asked to take charge of safety for the work group believed the open fast lines were the blocked slow lines.

As a result of its investigation the RAIB has made six recommendations to Network Rail. These relate to:

The RAIB has also identified one learning point; that those in charge of safety should be careful to check safety critical information when challenged by others in their team.

The recent tragic death of a track worker on the Brighton main line at Stoats Nest Junction is a stark reminder of the risk of working on the railway tracks. Prior to this accident, it had been nearly five years since a track worker was struck and killed by a train. However, in that time there have been too many near misses, such as this one at South Hampstead, in which people have had to jump for their lives at the last moment. In the case of the near miss at Egmanton in October 2017, a multi-fatality accident was only avoided with two seconds to spare.

The number and type of near misses in recent years is hugely disappointing given the efforts made to address track worker safety during that time. Every near-miss, however caused, should be viewed as a failure of the system to deliver safety.

Over the same period, Network Rail has introduced a number of changes to procedures, and several new initiatives, to try to reduce the risk. One of these re-introduced the concept that there should be a ‘person in charge’. This was intended to make an identifiable and capable person responsible for all aspects of the planning and delivery of safe work, for each job. It is disappointing that our investigation found that the way in which this concept had been implemented lacked clarity, and the result of this was confusion on site.

As well as this organisational issue, we found that staff were disorientated, and did not know which line was which. This could have been readily solved if they had had proper diagrams, and if clear signs had been provided at the point where they entered the railway. RAIB has raised this issue before – it’s time that the industry thought long and hard about the way it provides critical safety information to its staff and contractors. As I once discovered in my early career, it is all too easy to become disorientated on railway infrastructure, particularly at night.

I am concerned that, despite much effort and many initiatives, we are not seeing the hoped-for improvements in safety for track workers. Despite all the efforts that the industry has made, this kind of alarming incident is still happening – in the last two years we have published three investigation reports and four safety digests covering narrowly avoided collisions between trains and track workers. Our class investigation into the safety of track workers, published last year, took data from over 70 incidents which happened in a single year.

In this report we make six recommendations, all aimed at improving the safety of people who have to work on or near the line. There needs to be complete clarity about who is in charge, where the work is to take place, and which lines are open to traffic. I hope that the railway industry will do what’s necessary to ensure that track workers properly understand the track safety processes and the roles of everybody involved in their implementation.

Report 20/2018: Near miss with track workers and trolleys at South Hampstead