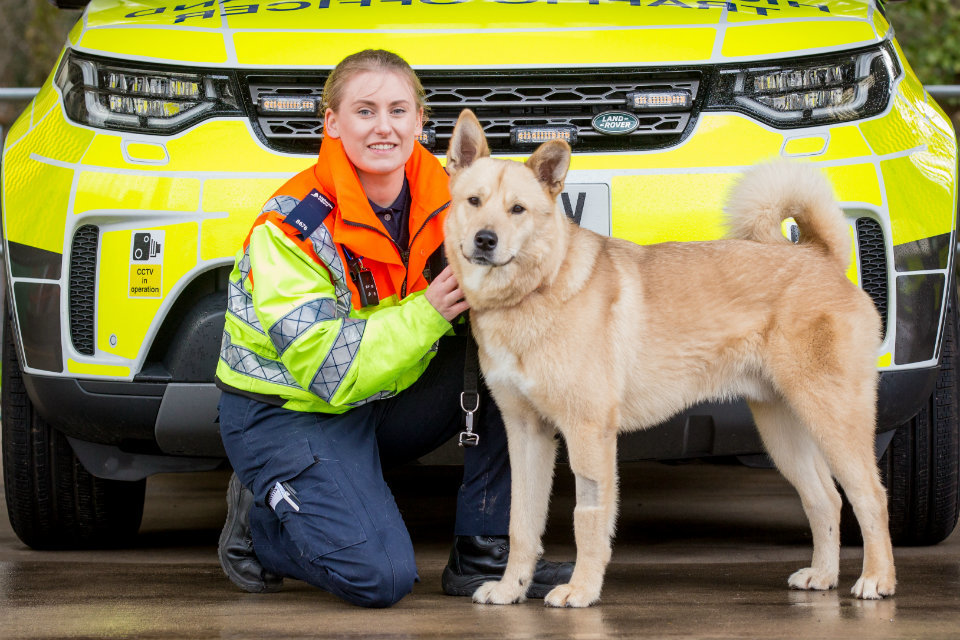 And sure enough, within minutes of spotting the stray animal, it had wandered into lane one of the motorway and was hit by a passing vehicle.

It was a normal shift and me and my colleague were travelling towards Trowell Services on the M1. I then spotted a dog walking along the hard shoulder on the southbound carriageway.

Clearly there was an obvious danger to the animal and the passing traffic as well, so I pulled the vehicle in front of him to try and prevent him walking any further. Another vehicle then pulled in behind the dog and our vehicle, effectively forming a shield.

Something then caught his eye and he wandered into lane one. Within a matter of moments, he was struck by a passing vehicle and flung into the hard shoulder. I heard an almighty yelp and I ran straight towards him and I wasn’t sure if he was alive.

He was whining in pain, so we wrapped him in my colleague’s fleece and I grabbed a towel from my bag to put him on my lap until the animal rescue team arrived.

I was talking to him throughout and stroking him trying to reassure him as he was confused by what had happened. He was clearly injured, and we weren’t sure if he’d fully recover. He tried to stand up, but was clearly in pain and he looked at me and I just told him to lie down and I cuddled him.

Despite being unsure of the true extent of his injuries, Hannah says a clear bond formed between the pair during those moments while help was on its way.

He kept looking at me and somehow he seemed calmer once I had cuddled him and tried to keep him warm,” she said. “I think he realised he was no longer in danger and he saw me as the person keeping him safe.

I found out his name was Thor after the incident. It just so happens that me and my family love Marvel films and I was really hoping he would get better from the ordeal.

And in a twist of fate akin to a superhero movie, Hannah was soon to become Thor’s own superhero in her own right by asking to adopt the dog. She said:

It actually turns out the owners didn’t want him anymore and I knew instantly that I wanted to adopt him. We’ve always loved dogs and it was only right that I take him into our family and give him the loving home he deserves.

Thor is now settled in and living happily with Hannah, her son Oscar and partner Rob.

While this story has a happy ending, Hannah also wants to pay tribute to those involved in the rescue and a pivotal role in helping to keep the dog from further harm. She added:

I’d also like to thank everyone involved in this because it was a real team effort. My control room colleagues played a massive part by ensuring they kept an eye on us from CCTV and also, I’d like to thank the dog team and the gentleman that pulled into the hard shoulder to help us during the incident. And also credit must go to the rescue centre responsible for his recovery.

We’re delighted that this story ended well and it’s great that Thor is settling into his new home with Hannah and her family. Incidents involving animals can be unpredictable and it was a real team effort in helping to keep the traffic officers, road users and Thor safe. I’d also like to recognise John Evanson in our control room and Hannah’s crew mate on the day, both of whom contributed to the safe and positive resolution of this incident.