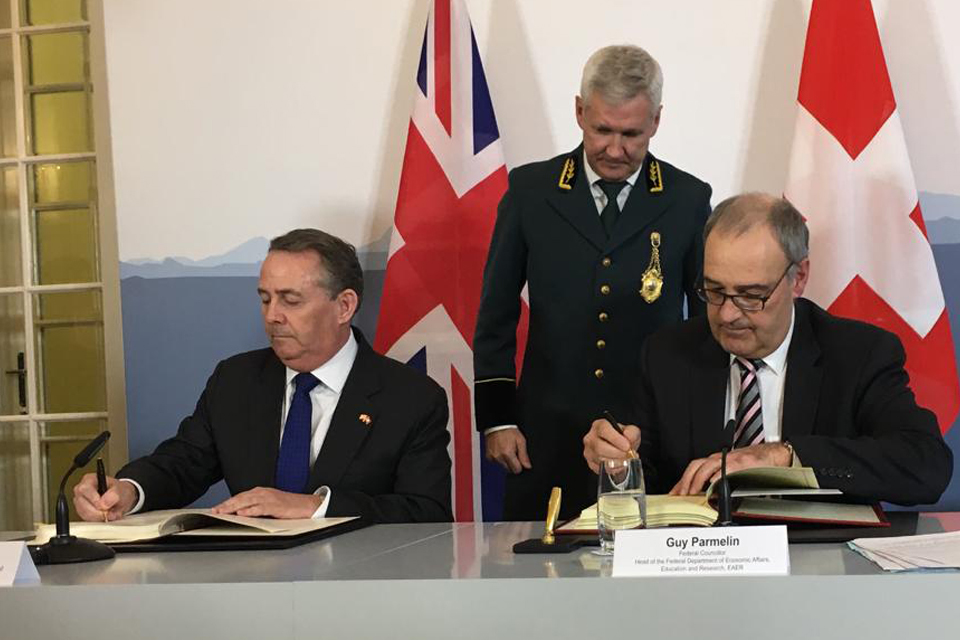 A trade continuity agreement will see British businesses and consumers benefiting from continued trade  with  Switzerland after we leave the European Union.

The Secretary of State for International Trade and President of the Board of Trade, The Rt Hon Dr Liam Fox MP, signed the UK-Switzerland agreement in Bern today (Monday 11th February) with  Swiss Federal Councillor Guy  Parmelin.

The news has been welcomed by business groups including the British Swiss Chamber of Commerce (BSCC) who say it will help to support jobs and ensure businesses can keep trading without disruption.

The agreement simplifies trade and allows businesses to continue trading freely, without any additional tariffs. It continues the elimination of duties on the vast majority of goods traded between the UK and Switzerland.

Trading on these preferential terms rather than on World Trade Organization terms will deliver significant savings and help to safeguard British jobs.

This will help to further strengthen the trading relationship between the UK and Switzerland, which was worth £32.1 billion in 2017.

Consumers in the UK will continue to benefit from more choice and lower prices on goods imported from Switzerland, such as clocks, watches, and pharmaceutical products.

Switzerland is one of the most valuable trading partners that we are seeking continuity for, accounting for more than £32 billion worth of trade a year.

This is of huge economic importance to UK businesses so I’m delighted to be here in Bern today, ensuring continuity for 15,000 British exporters.     Not only will this help to support jobs throughout the UK but it will also be a solid foundation for us to build an even stronger trading relationship with Switzerland as we leave the EU.

I am very pleased to have signed this agreement today. It ensures continuity in our trade relations after the United Kingdom leaves the European Union and lays the foundations for our future relations.

The BSCC welcomes the signing of the UK Government’s continuity trade agreement with Switzerland.

It is imperative for our members, both British & Swiss businesses, that trade continues. Switzerland is the UK’s 7th largest export market, 3rd largest non-EU market, 8th largest foreign direct investor and 10th top destination for UK outward direct investment. It is paramount that the British and Swiss governments have secured the continuation of a huge trading relationship with this agreement.