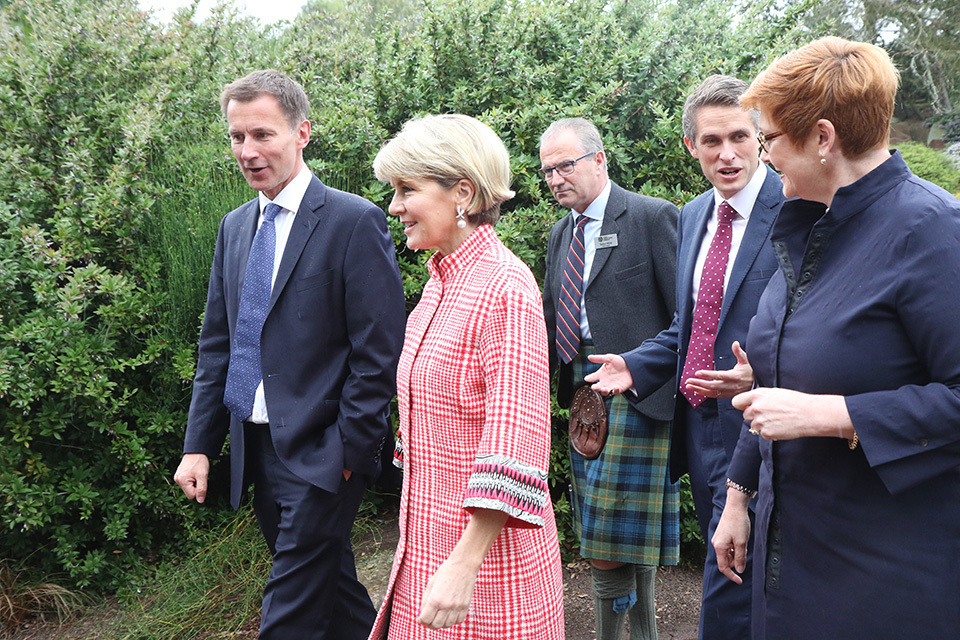 Foreign Secretary Jeremy Hunt and Defence Secretary Gavin Williamson will join their counterparts for discussions of high level foreign policy, defence and security issues between the United Kingdom and Australia. This AUKMIN marks over a decade since the talks began and is a chance for both nations to reflect on the enormous progress made over that time.

Speaking ahead of the talks Foreign Secretary Jeremy Hunt said:

Australia is one of the UK’s closest allies and I am delighted to be co-hosting Foreign Minister Bishop and Defence Minister Payne so soon after being appointed as Foreign Secretary. Our relationship with Australia is based on shared history, interests and values, and we have a dynamic modern friendship including a significant exchange of people and goods. The recent commissioning of nine warships from BAE, to be manufactured in Australia, is a sterling example of this relationship in action.

I look forward to our continued work together on global challenges and opportunities – based on our shared respect for the rules-based international system. The fight against extremism and terror, eliminating modern slavery and encouraging global co-operation will be top of the agenda during this tenth AUKMIN. Talks with businesses and government on boosting trade between us when we leave the EU will also be a top priority.

We are entering an exciting new era for Britain and Australia with our two nations having one of the strongest relationships in the world. With both our world class Armed Forces respected and present all over the globe, defence is one of the pillars of our deep and enduring relationship.

The £20 billion Global Combat Ship deal between BAE Systems and the Australian Government demonstrates how defence and our Armed Forces are not just vital to keeping us safe but also crucial to delivering prosperity, jobs, and keeping our two countries at the height of innovation and advanced manufacturing. I look forward to strengthening our historic defence relationship further this week.

The United Kingdom has a strong and dynamic relationship with Australia underpinned by common values, shared heritage and a closely aligned strategic outlook. Military ties between the 2 nations are deep and long-standing, including a range of operational and intelligence activities such as joint-operations in Afghanistan and Iraq. The recent awarding of a £20 billion contract from the Australian Government to BAE Systems to build nine British Type 26 Global Combat Ships is a demonstration of the relationship between the 2 countries creating a safer world.

International Affairs Oral statement to Parliament on the Ebola crisis …
0
✖