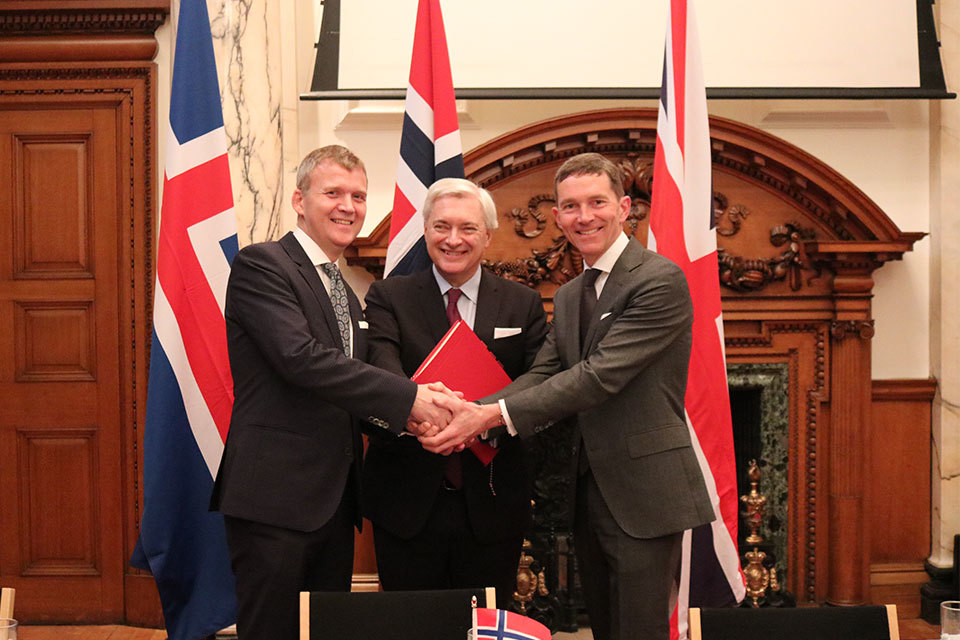 A trade continuity agreement will see British businesses and consumers benefitting from continued trade with Iceland and Norway after we leave the European Union.

Her Majesty’s Trade Commissioner to Europe, Andrew Mitchell, signed the UK- Iceland-Norway agreement on trade in goods in London today (2nd April 2019) with Stefán Haukur Jóhannesson, Ambassador of Iceland to the UK, and Wegger Christian Strømmen, Ambassador of Norway to the UK.

The news has been welcomed by businesses including Grimsby Fish Dock, who say it will help to support jobs and ensure they can keep trading without significant disruption.

The agreement covers trade in goods and will only be used in a no deal scenario. It maintains the same level of tariffs on goods traded between the UK, Iceland and Norway.

Trading on these preferential terms in a no deal scenario, rather than on World Trade Organization terms, will deliver significant savings and help to safeguard British jobs.

British businesses could avoid up to £15 million a year in tariff charges on exports that would otherwise apply if an agreement wasn’t in place.

The UK’s trade with Iceland and Norway was worth around £30 billion last year, with just over £24 billion of this in goods.

Consumers and businesses in the UK will continue to benefit from more choice and lower prices on goods imported from Iceland and Norway, such as aluminium products and some fuel and oil products.

Today’s agreement secures continued preferences for goods trade with Iceland and Norway for British businesses, as we prepare to leave the EU. These are key trading partners with whom we have a longstanding and historic trading relationship.

Our trade with Iceland and Norway was worth around £30 billion last year, with just over £24 billion of this in goods. This is good news for British businesses and we have a golden opportunity to further liberalise trade with these countries in the years ahead.

Grimsby Fish Market has welcomed the news, which it believes will be of benefit to businesses and consumers alike. The market has one of the largest daily auctions and the largest concentration of fish processors anywhere in the UK.

The town has strong links with Icelandic and Norwegian fishing industries with up to 75% of all the fish sold on the Grimsby Fish Market coming from Iceland and the majority of the fish sold to Grimsby fish processors coming from Norway.

Grimsby relies heavily on Icelandic and Norwegian supplies to the daily fish auction and to the processors.

This trade deal is extremely welcome, in fact vital, as 70% of the fish consumed in the UK is imported, most of that supply coming from Iceland and Norway.

It also gives clarity and confidence to numerous businesses within the Humber region.

The news has also been welcomed by Leonardo Helicopters, who employ nearly 2,800 people at their base in Yeovil, Somerset.

The company has a contract worth more than £1 billion to supply search and rescue helicopters to Norway and support them in service for the next 15 years.

Leonardo welcomes the signing of the UK-Iceland-Norway trade agreement as Norway is an important export market for our UK designed and manufactured helicopters and airborne electronic systems.

We have been doing business with Norway for nearly 50 years, are currently delivering 16 AW101 new generation search and rescue helicopters and see significant future business opportunities.

The government is seeking continuity for existing EU trade agreements which the UK participates in as a member of the EU. These agreements constitute around 11% of the UK’s trade.

The new UK-Iceland-Norway agreement maintains tariff preferences already in place on goods traded between the UK, Iceland and Norway. It will come into effect from exit day if the UK leaves the EU without a deal.

Business Scottish jam spreads across the pond to the US
0
✖