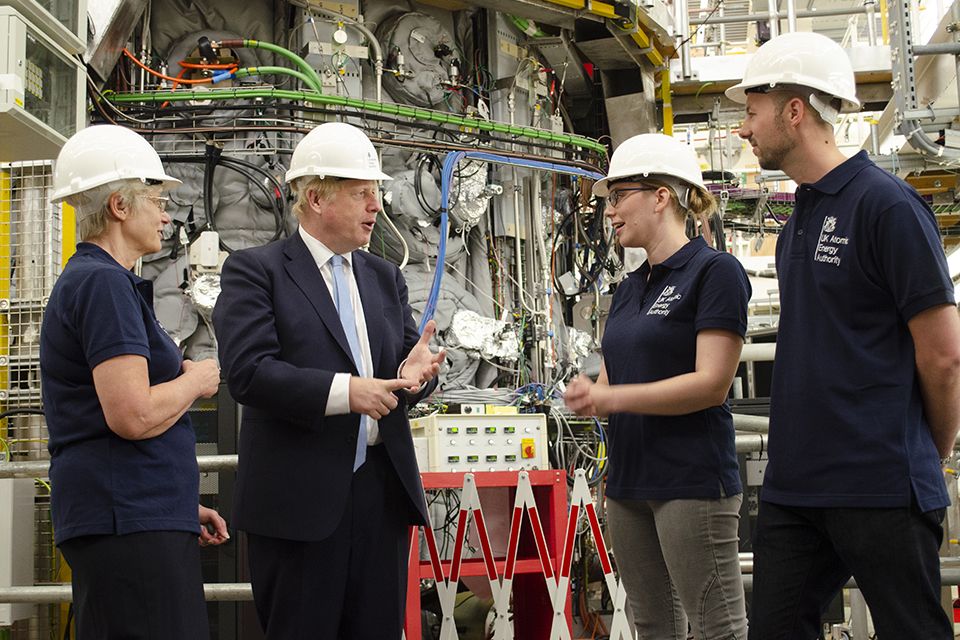 The visit marked a Government announcement on plans to develop a new fast-track visa route for the brightest and best scientists to continue to move to the UK after EU Exit.

During his visit, the Prime Minister was shown the work UKAEA is doing to harness the huge potential of nuclear fusion as a low-carbon energy source. This included the new MAST Upgrade fusion experiment, which is researching a compact design for future fusion power stations.

He also toured Culham’s Materials Research Facility to see its cutting-edge research into materials for nuclear reactors. As well as talking to those working at the facility, the Prime Minister controlled the manipulators which remotely handle materials samples.

The Prime Minister spoke with some of UKAEA’s apprentices about their careers and about the plans for a new £12M apprentice training centre, Oxfordshire Advanced Skills, opening in September at Culham. He then visited UKAEA’s robotics centre, RACE, to see how the latest research is helping UK industry compete in the fast-growing robotics sector.

It was fantastic to visit Culham Science Centre today and meet the men and women who are helping to invent a sustainable fusion reactor.

The UK is leading the world in this sector, thanks in significant part to the work of the UK Atomic Energy Authority. I’m confident that with the help of the immigration reforms I have announced today, we will continue to do so for many years to come.

We were delighted that the Prime Minister chose Culham as the place to make his first science announcement.

Fusion energy’s huge potential is well known and the PM reiterated the Government’s support for UKAEA’s research. We also showed him how the Materials Research Facility and RACE are providing spillover benefits and supporting UK industry in adjacent fields, at the same time as working towards delivering sustainable fusion energy.

Talking to the PM today I could see he’s an enthusiast for science. He wants the UK to be bold – and what could be bolder than taking on the challenge of delivering fusion to address climate change.

The UK Atomic Energy Authority (UKAEA) researches fusion energy and related technologies, with the aim of positioning the UK as a leader in sustainable nuclear energy. It oversees Britain’s fusion programme, headed by the MAST Upgrade (Mega Amp Spherical Tokamak) experiment. It also hosts the world’s largest fusion research facility, JET (Joint European Torus), which it operates for European scientists under a contract with the European Commission. Based at Culham Science Centre near Oxford, UKAEA is an executive non-departmental public body, sponsored by the Department for Business, Energy & Industrial Strategy.

Fusion research aims to copy the process which powers the Sun for a new large-scale source of clean energy here on Earth. When light atomic nuclei fuse together to form heavier ones, a large amount of energy is released. To do this, fuel is heated to extreme temperatures, hotter than the centre of the Sun, forming a plasma in which fusion reactions take place. A commercial power station will use the energy produced by fusion reactions to generate electricity.

Nuclear fusion has huge potential as a long-term energy source that is environmentally responsible (with no carbon emissions) and inherently safe, with abundant and widespread fuel resources (the raw materials are found in seawater and the Earth’s crust).

Researchers at Culham are developing a type of fusion reactor known as a ‘tokamak’ – a magnetic chamber in which plasma is heated and controlled. The research is focused on preparing for the international tokamak experiment ITER, now being built in southern France. ITER – due to start up in 2025 – is designed to show that fusion can work on the scale of a powerplant, and if successful should lead to electricity from fusion being on the grid by 2050.

Fusion research at Culham is funded by the Engineering and Physical Sciences Research Council (EPSRC) and by the European Union under the EURATOM treaty.

Business Clothes designed to grow as children age could mea…
0
✖