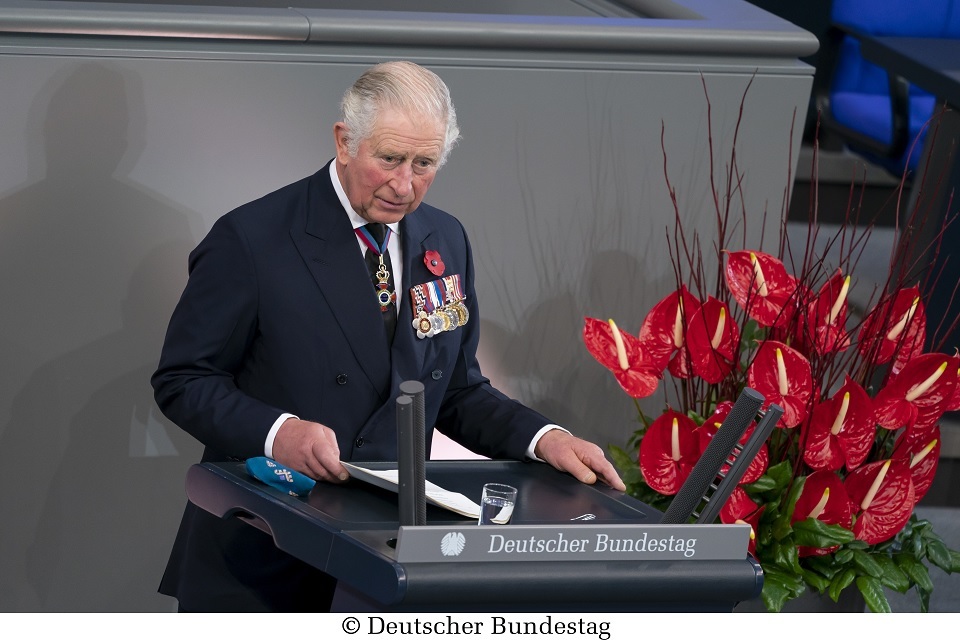 The speech was delivered in English and in German, this is the full text in English.

President of the Bundestag,

It is a particular honour to have been invited to speak here today, on this solemn and special occasion, and to join you in eternal remembrance of all victims of war and tyranny. In this memorable year, marking seventy-five years of peace and friendship between us, it gives my wife and myself such great pride to return to Germany, and to renew those enduring bonds between our two countries.

I have been coming to Germany since I was just thirteen years old, and first visited Berlin nearly fifty years ago. Over the decades, I have been struck by the ways in which this remarkable city embodies so much of the history of our continent, and all that we have been through. After the devastation of conflict, and the tragedy of division, it has not only endured but triumphed, liberated from flawed and distorted ideologies so that hope and the human spirit could prevail.

Berlin reminds us that the fortunes of all Europeans have been dependent on one another for centuries. The relationships we enjoy today are built on foundations dug deep in the bedrock of our common experience, anchored by bonds running North and South, East and West, through our diverse communities and across our borders.

The connections between the British and German people go back at least as far as the Roman Empire, evolving within a shared civilisation, and woven with threads drawn back and forth through the years. For many of us, those ties are personal, with family connections and associations which remain greatly treasured to this day.

Our people have prospered from one another through commerce, since the Hanseatic League established a trading relationship which continues to drive our shared prosperity. However, the relationship between us has always been so much more than a transactional one. We have long viewed each other with fascination – admiring of each other’s culture and inspired by each other’s ideas, we have influenced and borrowed from one another in a virtuous circle of reinforcing connections that have strengthened and enriched us both.

The examples are myriad. It was a German, Hans Holbein the Younger, who became the first celebrated artist in England. Half a century later, German was the first language into which Shakespeare was translated. The English landscape garden was brought to Germany by Prince Leopold III of Anhalt-Dessau who, inspired by the models of Stourhead and Stowe, laid out the magnificent gardens at Wörlitz of which I am proud to be Patron. One can scarcely imagine where the British musical tradition would be without the influence of Bach, Beethoven or Brahms; and the music of Georg Friedrich Handel, who was born a German but died British, has been played at the Coronation of every British Sovereign since that of my seven times great grandfather, King George.

Throughout the nineteenth century, German scientific and artistic thought shaped British life, encouraged, in part, by the leadership of my great, great, great, grandfather, Prince Albert, The Prince Consort. German was a vitally important language for British academics to acquire, at a time when German immigration to Britain grew significantly and Schroders Bank and Reuters News Agency helped shape London’s global role. It was not as remarkable as it perhaps now seems, that at the outbreak of the First World War four members of the British cabinet had studied at German Universities. It is similarly striking, that in the years after that conflict, British students flocked back to Germany for the exposure to German culture that they, and their parents, considered to be so essential to their education.

Looking back through the prism of two world wars, with all the cruel distortions rendered by conflict and loss, so many of those close connections between Britain and Germany became obscured. And yet, as our countries, and our people, set to the difficult task of rebuilding this continent – and our trust in one another – the deep and historic well of shared experience from which we drew, enabled the seeds of reconciliation to take root and flourish.

And so, over these past seventy-five years, our two countries have been restored to our natural position of allies and friends. Britain was by Germany’s side through those extraordinary years of post-war reconstruction. We have watched, with profound admiration, the remarkable success of Germany’s peaceful reunification over the past thirty years, and with deep respect for the example that she has offered the world.

Today our countries stand together as indispensable partners in almost every field of endeavour imaginable, conscious of our past but confident about our future. As the message read on the wreath that you, Mr. President, laid at the Cenotaph in London two years ago this week, let us “remember side by side, grateful for reconciliation, hopeful for a future in peace and friendship.”

Reconciliation is a difficult but essential process, as I have seen in almost every corner of the globe, as well as on the islands of my own country. That we have healed so much division on our continent is cause for sustained gratitude and the utmost pride. However, as thankful as we should be for how far we have come, I know that many of you share my view that we must take nothing for granted.

We can never reconcile ourselves to the horrors of the past as simply the events of another age – distant, timebound, disconnected from our present lives. Nor can any of us assume that they are someone else’s burden to bear. Instead, the searing relevance of the past to the present day, and to our future, makes it our solemn and shared responsibility to ensure that heartbreaking lessons are learned and heeded by each successive generation.

The former Chief Rabbi of the United Kingdom, Rabbi Lord Sacks, who so tragically died earlier this month, wrote that “a future of reconciliation can, in some measure at least, retrospectively redeem the past.” He was quite right, of course. Otherwise not only do we compound past wrongs and amplify their effect, but we fail all those who struggled and died for a better tomorrow.

In this, we must work together. We must remain vigilant against threats to our values and our freedoms; and never rest in seeking to create mutual understanding and respect. We must be resolute in addressing acts of unspeakable cruelty against people for reasons of their religion, their race or their beliefs, wherever they occur in the world. We must stand alongside each in determined defence of the future we owe our children and our grandchildren.

The challenges to that future are manifest – whether from this dreadful pandemic which threatens not just our public health but our prosperity and security; or from the existential threat to our planet, and our way of life, from climate change and catastrophic biodiversity loss.

These crises demand that we act together, and the partnership between the United Kingdom and Germany offers such a vital opportunity in this regard. We are heavily invested in each other’s futures, such that our national interests, whilst distinct, will always be entwined.

Our countries are instinctive problem-solvers, working together to find innovative and practical solutions to the challenges we see in the world around us – on global health and vaccine development; clean growth and renewable energy; forest protection and biodiversity; and climate action in developing countries. Together, we stand resolutely in defence of our shared values, as champions of human rights and the Rules Based International System. Together, we are an indispensable force for good in our world.

The English poet, John Donne, famously wrote that “no man is an island entire of itself. Every man is a piece of the continent, a part of the main.” One might equally submit that no country is really an island either, other than in the wholly literal sense. Our histories bind us tightly together and our destinies, although each our own to forge, are interdependent to a considerable degree.

Mr. President, President of the Bundestag, Ladies and Gentlemen

The United Kingdom has chosen a future outside the European Union, and the relationship between our countries is evolving once again. Its shape is a matter negotiated between our governments and its essence is defined by the enduring connections between our people. It is, therefore, my heartfelt belief that the fundamental bond between us will remain strong: we will always be friends, partners and allies.

As our countries begin this new chapter in our long history, let us reaffirm our bond for the years ahead. Let us reflect on all that we have been through together, and all that we have learned. Let us remember all victims of war, tyranny and persecution; those who laid down their lives for the freedoms we cherish, and those who struggle for these freedoms to this day. They inspire us to strive for a better tomorrow – let us make this our common cause.

Prince of Wales speech at the Bundestag, Berlin: 15 November 2020