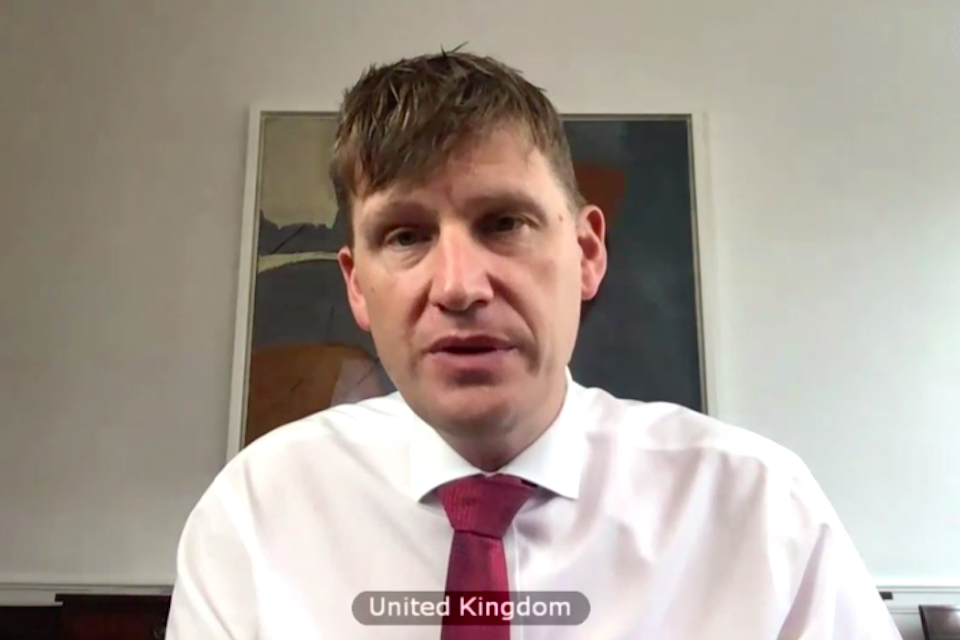 Thank you, Mr President, and let me also thank Special Envoy Pedersen for his continuing efforts to facilitate a political solution to the conflict in Syria.

Along with nearly all Council members, we have for many years emphasised the need for dialogue and the fundamental importance of finding a political solution to the crisis. For this reason, we welcome the convening of the third meeting of the Constitutional Committee in Geneva at the end of August. We are pleased to note that some discussions took place, despite cases of Covid-19 emerging among the delegates.

But almost a year since the Security Council welcomed the launch of the Constitutional Committee in its Presidential Statement of 8 October in 2019, there appears to be very little substantive progress. For tangible progress to be made, all parties, including the Syrian regime, should be ready to make concessions and commit to outcomes to help deliver a lasting end to the conflict.

As we all determined in that 8 October Presidential Statement, the launch of the Syrian-owned and Syrian-led Constitutional Committee should be the beginning of a political process to end the Syrian conflict, in line with resolution 2254, which meets the legitimate aspirations of all Syrians. And the United Kingdom continues to stand behind its commitment to resolution 2254 and calls for parallel progress to be made on all aspects of the resolution.

Crucially, this requires a nationwide ceasefire. The Russian ambassador asks why. Well, it was called for in UN Security Council Resolution 2254, which the Russian Federation voted for. It’s been called for repeatedly by Special Envoy Pedersen, including just today. Russia’s approach is to say that anybody who objects to the Assad regime’s barbarism and brutality is a terrorist. But I think it would be better for all of us and for our debate if we stuck with the UN definitions.

We’re pleased that the ceasefire in Idlib continues broadly to hold, but we have concerns about the recent increase in airstrikes. We call on all parties to respect the agreement of 5 March between Turkey and Russia and to work with the Secretary-General and his Special Envoy on the implementation of a full nationwide ceasefire.

Now, colleagues, in resolution 2254, we expressed our support for free and fair elections, administered under the supervision of the United Nations, to the satisfaction of the highest international standards of transparency and accountability, with all Syrians, including members of the diaspora, eligible to participate. This means that all those entitled to vote have the right to be registered and must be free to make their choice; that all registered political parties have an equal right to contest the elections and campaign for voter support; and that all votes are counted and the announced results reflect that vote count.

The United Kingdom was clear the Syrian presidential elections in 2014 fell far short of these standards. We would therefore welcome further clarification on how elections will be conducted next year and how they will meet the standards envisaged by the Security Council.

UNSCR 2254 is clear that a new constitution should be in place before those elections take place. As such, recent Russian statements that suggest elections and the Constitutional Committee could be decoupled are deeply concerning. They are damaging to the political process and to the unanimous opinion of this Council.

Mr President, on detainees, the release of political prisoners and vulnerable persons, particularly in the context of a nascent political process and an ever-worsening Covid-19 outbreak, should not be a controversial priority. The very least the Syrian regime and other parties can do in the interests of humanity is to grant independent organisations access to detention facilities and to provide loved ones with information as to the whereabouts or the fate of detained or disappeared family members.

The mistreatment and torture of detainees must stop. We take note of the harrowing accounts of torture and detention presented in the latest report of the Independent International Commission of Inquiry. This is people being beaten with sticks and cables, bound around tires, hung from ceilings and walls and lashed. These crimes are clear evidence of a breakdown in respect for human life by the regime and others, as well as a lack of will on the part of the regime to engage with UNSCR 2254.

Mr President, the Syrian regime continues to drag their feet on the political track, perhaps in the mistaken hope that they and their allies will succeed in the brutal military suppression of their people.

The Syrian authorities have serious questions to answer. How are they taking forward implementation of resolution 2254? What steps will they take to unlock progress? What approach are they taking with regard to making the Constitutional Committee a success? What do they have to say to Syrians all around the world who want to return home but are too terrified to do so? What are they willing to do on issues such as detainees and missing persons?

We hear from the Syrian regime about everything except their own responsibilities.

Progressing on a political process to end the Syrian conflict