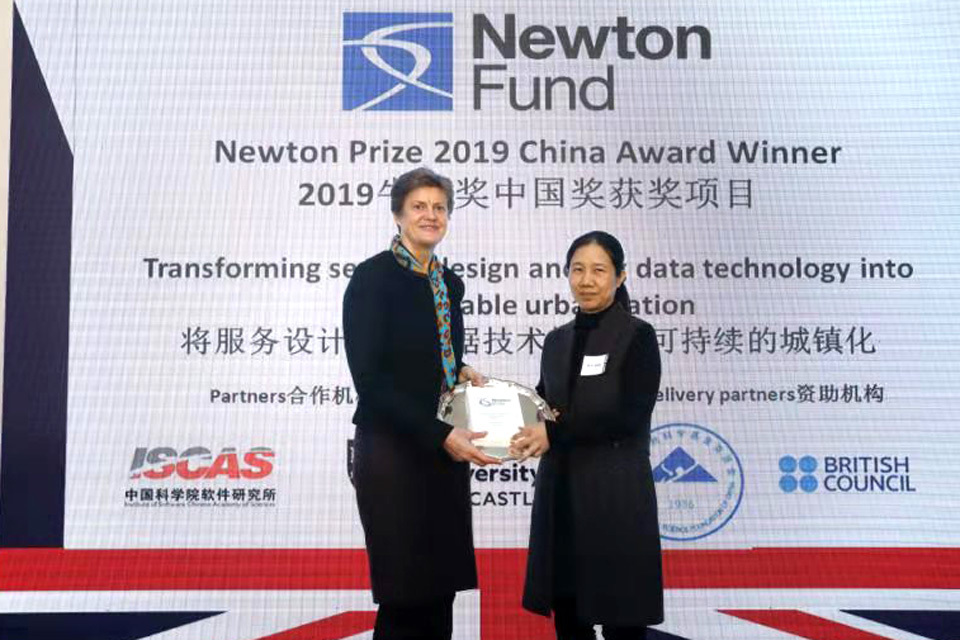 The winning project investigated how to apply big data and design principles to tackle urban transportation and the difficulties that elderly people face in cities around the world.

The project was supported by the Newton Fund Researcher Links Workshops programme, facilitated by the British Council and National Natural Science Foundation of China. It also brought together early career researchers from the UK and China inspiring the next generation of scientists.

I am delighted to award the Newton Fund prize to this fantastic project which is helping to make our cities more liveable for our ageing population.

The UK-China research partnership has delivered huge benefits to the world in tackling global challenges and achieving the United Nations Sustainable Development Goals. The Newton Fund has played a key role in bringing the best UK and Chinese scientists together and will continue to provide more opportunities in the future.

Five projects were shortlisted for the China category of the Newton Prize 2019. These included:

The UK-China Research and Innovation Partnership Fund (the Newton Fund) offers comprehensive funding to bring together the best researchers and innovators from UK and China to tackle the biggest challenges we face globally. The 2019 Newton Prize, welcomed by the UK and Chinese governments, rewards achievements of the Newton Fund in tackling global challenge issues such as climate change, food security, and health.

Since its launch in 2013, over 1000 partnerships have been jointly supported across 120 UK, and 260 Chinese research institutions and businesses.

As well as making a valuable contribution to global goals, these partnerships also develop new and fruitful networks between researchers and provide vital career opportunities to researchers and innovators.

With Newton Fund support, we have brought together an interdisciplinary research team, combining the UK’s strength in service design and China’s strength in big data analysis and natural interaction technology to provide intellectual and human support to resolve the issues of global sustainable urbanisation.

We hope to use our technology to provide personalised services to vulnerable groups in cities such as the elderly and disabled.

Another three projects from China were shortlisted for the £500,000 Chair’s Award under the Newton Prize, tackling challenges in crop monitoring and smart farming for food security, and cancer. The Chair’s Award winner will be announced on February 12th 2020 in London.

UK and China science and innovation collaboration spans nearly 40 years. In 2017 the UK-China Joint Strategy for Science, Technology and Innovation Cooperation strategy was launched; the first comprehensive science and innovation strategy that China had developed with another country. The strategy sets the framework for future cooperation to jointly tackle global challenges and drive economic growth over the next 10 years covering co-operation across the spectrum, from research through to the commercialisation of new technologies.

The Partnership Fund is a bilateral fund launched in 2014. The Fund is managed by the UK Department for Business, Energy and Industrial Strategy and Chinese Ministry of Science and Technology. Funding is allocated through competitive process managed by both sides. The Fund is delivered by partners including:

Support for the UK side comes from the Newton Fund, with £180m allocated to the China partnership. The Newton Fund builds research and innovation partnerships between the UK and 17 partner countries to support economic development and social welfare. The partnership with China is the largest.

The Newton Prize is a £1 million fund which recognises the excellent research and innovation the Newton Fund has invested in since its launch in 2014. The Newton Prize 2019 covered the partnerships with China, Indonesia and the Philippines. Each country has received one prize of up to £200,000 to the project that best demonstrates high quality research and impact. The Chair’s Award of £500,000 will be presented to one project from across the three in this year’s prize that best demonstrates knowledge exchange and partnership working. An independent Newton Prize judging committee made up of experts from the UK and the 2019 countries was chaired by Professor Alice Gast, Imperial College London President.

The Newton Fund and Newton Prize are proud to support Green is GREAT, an ambitious multi-year national campaign run by the British Embassy Beijing. Tackling climate change is a clear priority for the UK and we continue to move forward on fulfilling our global role in leading efforts to tackle climate change and the effects of a declining environment. The UK-China Green partnership is helping to tackle climate change, and through Green is GREAT campaign activity we will deepen this partnership to create even wider impact. The first phase of Green is GREAT campaign will focus on three strands: Green Finance, Renewable Energy and Marine Plastics.