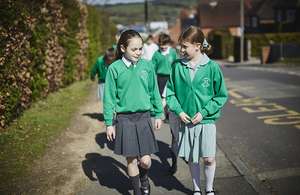 Travelling to education is the most common single purpose of walking journeys but there is huge potential to increase the proportion of children walking to school. A generation ago, 70% of primary school children walked to school but this has dropped to just over half (51%).

The government has a target in its Cycling and Walking Investment Strategy (CWIS) to have 55% of primary school children walking to school by 2025.

Living Streets, with support from the Department for Transport, has been running the Walk to School Outreach (WTSO) project since 2017. It does so mainly through behaviour change interventions delivered in schools, including WOW, Living Streets’ year-round walk to school challenge, and by influencing local infrastructure decisions.

Over the period 2018 to 2019 the WTSO project promoted walking in 275 primary schools including 133 new schools. The project is estimated to have encouraged around 10,000 extra children and around 2,500 extra adults to walk to school over this period.

Final evaluation carried out at the end of March 2019 shows that walking rates increased by 38% among new WTSO project schools and increased walking rates were sustained in existing schools in 2018 to 2019. This represents around 4 million new walking trips and 1.3 million fewer school run car journeys in that year with total vehicle miles reducing by around half a million. This will lead to considerable transport, environmental and health benefits, with an estimated benefit-cost ratio of 10.

Transport Every child in England to be offered cycle trainin…