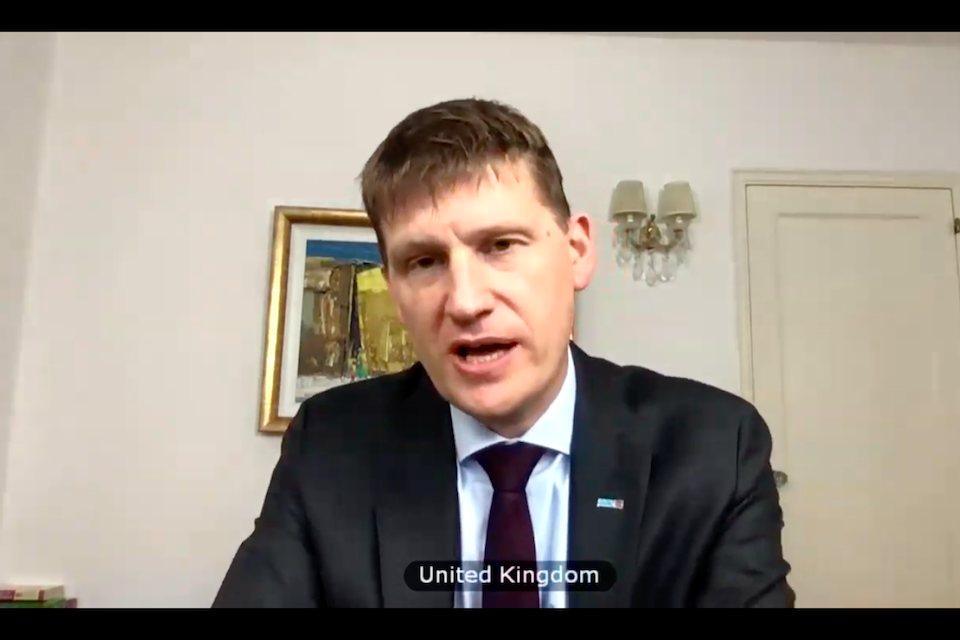 Thank you very much, Madam President, and thank you to Special Coordinator Mladenov for his briefing.

Madam President, as others have done, I would like to start by reflecting on the tragic passing of Saeb Erekat. I echo the words of my Prime Minister and Foreign Secretary in offering our condolences to the family of Saeb Erekat, to President Abbas, and to the Palestinian people. Dr Erekat dedicated his life to dialogue, to Palestinian rights, and to advancing the cause of peace. He will be sorely missed.

It is with Dr Erekat’s legacy in mind that we must renew our commitment to acting through dialogue, to building trust and cooperation, and to avoiding the unilateral and inflammatory steps that undermine the cause of peace.

Madam President, as we made clear repeatedly in this Council, the United Kingdom opposed annexation and welcomed its suspension. Other unilateral action which jeopardises the physical viability of a future Palestinian state is also unacceptable. The United Kingdom condemns the Government of Israel’s publication of tenders for construction in the East Jerusalem settlement of Givat Hamatos, an extremely sensitive area of the West Bank. Settlements are illegal under international law, and remain an obstacle to peace and a threat to the two-state solution.

The United Kingdom also expresses our serious concern following the demolition of Humsa Al-Baqai’a by the Israeli Authorities on 3 November. This act caused the displacement of vulnerable Palestinians, including 41 children, and it caused unnecessary suffering. 2020 has seen the highest levels of demolitions of Palestinian homes and structures since 2016. The United Kingdom calls on the Government of Israel to cease this policy, and provide Palestinians with a clear, transparent route to construction in Area C of the West Bank. In all but the most exceptional of circumstances, Madam President, demolitions are a violation of International Humanitarian Law.

Madam President, the United Kingdom remains deeply concerned by the situation in Gaza, particularly at this time of global pandemic. We continue to urge the parties to prioritise progress towards reaching a durable solution for Gaza and to take the necessary practical steps to ensure Gaza’s reconstruction and economic recovery. We encourage actors to put forward long-term, sustainable proposals to resolve the threat posed to Israel’s security by Hamas, Palestinian Islamic Jihad and other militants in Gaza. We call upon Hamas and other terrorist groups to permanently end their incitement and rocket fire against Israel.

We note the Commissioner General’s urgent call for additional funding for UNRWA this month, without which schools will close from the beginning of December. We call in particular on states which have cut their funding significantly in recent years to support UNRWA now. And I note that this year the United Kingdom has given over $65 million, and that is commensurate with previous years as well. We are sympathetic to those who argue that UNRWA must do more to reach a secure and sustainable financial footing; but this cannot be achieved by 1 December, and money is needed by then to avoid unnecessarily adding to the refugees’ suffering.

This week, Madam President, we have seen the historic first Ministerial visit of the Kingdom of Bahrain to Israel. Normalisation agreements show that the Arab world and Israel can pursue a positive path, away from hostility, and towards a more peaceful, prosperous region.

With dialogue in mind, my government therefore welcomes reports that the Palestinian Authority and the Government of Israel will return to cooperation and abide by signed agreements. Full cooperation, across financial, security and health matters, puts the needs and security of Israelis and Palestinians first. This is an example of the dialogue and compromise that we have called for, and that will be required to make meaningful progress towards a two-state solution. Both parties should now seize this positive momentum, and show commitment to their bilateral agreements through their actions on the ground.

73 years ago this month, the United Nations decided on the partition of Palestine. Piece by painful piece, over many years, progress was made towards an agreed partition – a two-state solution. As the region takes strides towards dialogue, it is time, too, for the parties to the Israel-Palestine conflict to stop dismantling peace, and start building it again.

Putting the needs and security of Israelis and Palestinians first