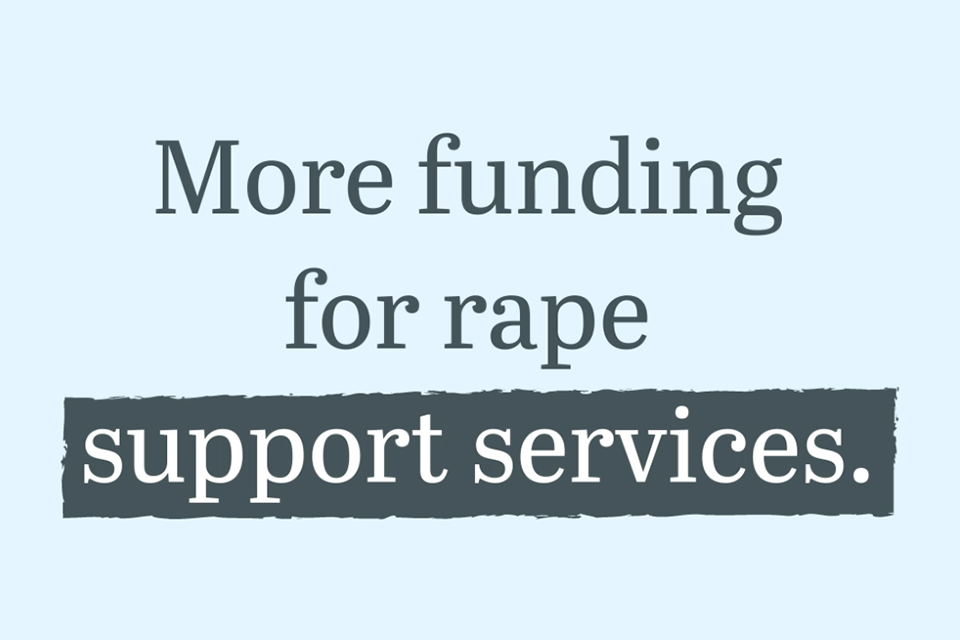 The move will increase the money available – up from £8 million to £12 million per year – to total £32 million over three years for a range of services including tailored face-to-face support and counselling.

Nationally more than 160,000 sexual offences were recorded by police last year, and this funding will ensure help for victims is available in all 42 of the country’s Police and Crime Commissioner areas.

Today’s (7 February 2020) announcement will also see a £1 million investment to recruit more Independent Sexual Violence Advisors (ISVAs) across the country, who provide advice and support for victims, acting as the link between police, support services and criminal justice agencies.

After a commitment to the investment was made in September, rape support centres across the country have now been offered the 50 per cent uplift in funding. This is guaranteed over a 3 year period, providing centres with stability and security so that they can focus on delivering services that victims so desperately need.

Rape and sexual violence are devastating crimes and victims must have the confidence that support will be there when they need it.

That is why we have increased funding twice already to ensure no victim is left to suffer alone.

We know there is more to do, but through the Government’s Victims’ Strategy we are continuing to improve the support on offer at every stage of the justice system.

Rape Crisis England & Wales is pleased the Ministry of Justice has increased its Rape and Sexual Abuse Support Fund.

With demand for Rape Crisis support, counselling and advocacy services continuing to rise, this gratefully received funding increase is a welcome contribution to the increasing need for specialist services among victims and survivors of child sexual abuse, rape and all forms of sexual violence.

This lift is the second time we have increased funding in the last year to the Rape Support Fund, bringing it to £12 million per year from April. The increase will allow our local services to plan for the future – offering them stability and security so that they can focus on delivering services that victims so desperately need.

The increase will allow our local services to plan for the future – offering them stability and security so that they can focus on delivering services that victims so desperately need.

The move builds on new laws brought in by this government that will ensure serious violent and sexual offenders spend longer behind bars – ensuring the public and victims are protected from these heinous crimes.

Law Rape victims in Wales to benefit from UK Governmen…