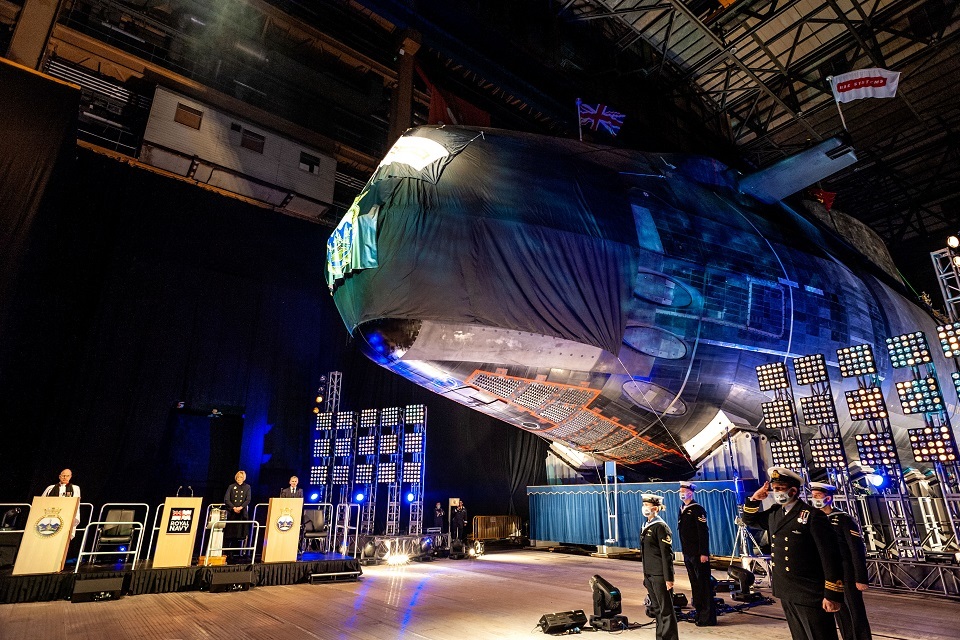 The start of construction on a vast building hall for the Royal Navy’s next-generation Type 31 frigates and the naming of the fifth Clyde-bound Astute Class submarine Anson marked a red letter day for the Royal Navy in Scotland today, (Friday 11 Dec 2020).

Defence Secretary Ben Wallace welcomed the steel structures being put in place and main work getting underway on Babcock’s mammoth Rosyth module hall in a virtual message of support, while the Venerable Martyn Gough QHC, Chaplain of the Fleet and Archdeacon for the Royal Navy, blessed the 7,400 tonne, 97m long nuclear-powered boat in Barrow-in-Furness in Cumbria.

Robertson of Elgin has been awarded a £31.5 million contract by Babcock to build the module hall. This project will maintain 100 jobs, create five new full-time roles and will support a further 100 positions nationally throughout the supply chain.

Anson will eventually join her sister boats HMS Astute, HMS Ambush and HMS Artful, already in service, at HM Naval Base Clyde. Together they will contributing to operations and supporting the Scots-based Continuous at Sea Deterrent. HMS Audacious, the fourth of class, left Barrow earlier this year and is currently undergoing sea trials. Boats six and seven – Agamemnon and Agincourt – are in construction at the Barrow shipyard by BAE Systems.

Defence underpins a wealth of jobs and investment across the entire United Kingdom. Babcock’s ‘frigate factory’ in Rosyth demonstrates the huge footprint of prosperity that UK Government investment in defence brings.

This vast industrial facility will see Scottish shipbuilders build our latest warships that will take pride of place in the Royal Navy fleet.

HMS Anson will play a vital role in defending the UK from deep-sea threats posed by adversaries around the world and provide a competitive edge for decades to come.

The name Anson already exemplifies the long and rich history of our Royal Navy and now, thanks to Anson’s latest maritime technology, showcases excellence in UK shipbuilding.

Standing at 147 metres long, the new shipbuilding hall, when completed, could comfortably fit three Olympic size swimming pools. Towering at 30 metres high the aptly named ‘megadoors’ will accommodate the vital crane system, known as Goliath. Once the Type 31 build begins next year, the hall will be able to accommodate two vessels being assembled at the same time side by side.

The start of work follows the substantial £16.5 billion UK Government settlement for defence over the next four years that will modernise the armed forces, reinvigorate the shipbuilding industry and bring jobs and prosperity to every part of the UK.

Type 31 will be the beating heart of the Royal Navy’s surface fleet, deterring aggression and supporting the UK’s national interests across the world. The programme employs more than 1,250 people across the UK, which will create a legacy of infrastructure, innovation and skills for the shipbuilding sector. Off the back of the programme, Babcock has also jumpstarted a further 150 apprentice roles to set the sector up for success in the next generation.

Advanced nuclear technology means the Astute Class submarines never need to be refuelled. The extremely capable boats can circumnavigate the world without surfacing and are limited only by the amount of food that can be stored and the endurance of the crew. The submarines manufacture their own oxygen and fresh water from the ocean.

The last HMS Anson (1942-1951) was a King George V-class battleship, which saw active service in World War Two. All eight Anson vessels have been named after an Admiral of the Fleet, George Anson (1697-1762), who commanded at the first battle of Cape Finisterre and was First Lord of the Admiralty during the ‘7 Years War’.

International Affairs RFEA and TechVets are bridging the gap for veteran…