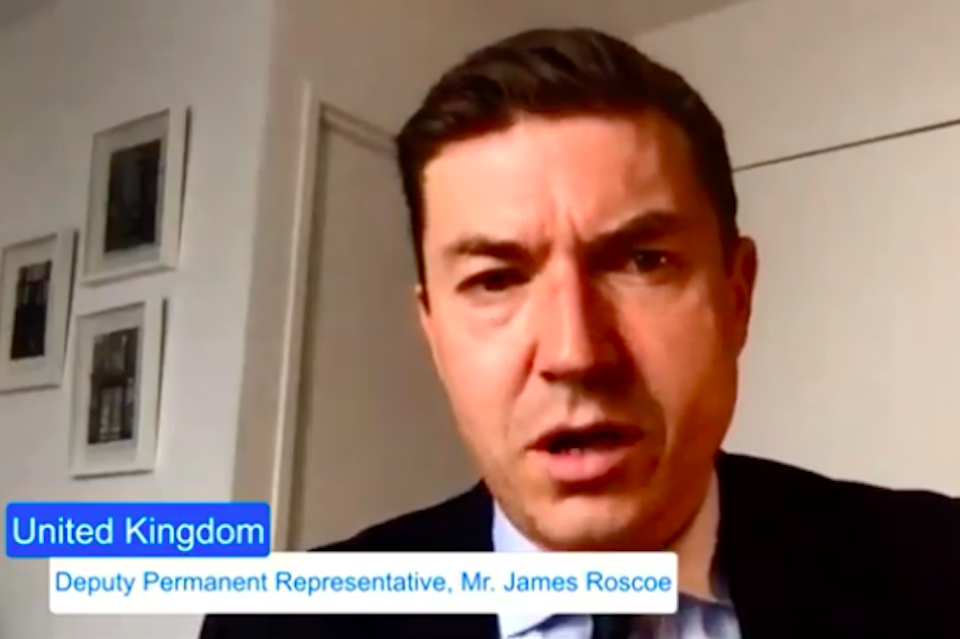 Good morning. The United Kingdom is honoured to co-sponsor this event in commemoration of the 25th anniversary of the genocide in Srebrenica. I would like to begin by thanking the President of the General Assembly, the Special Advisor of the Secretary General on the Prevention of Genocide, and the Director of the War Childhood Museum for their insightful briefings today.

Tomorrow, as we mark the 25th Anniversary of the genocide, the world will mourn the victims of Srebrenica. While we remember those who lost their lives, our thoughts are also with their families, who have endured unimaginable suffering. But we also think of their strength and bravery in the fight for justice. The UK will continue to stand with them.

Just 50 years after the horrors of the Holocaust, and 50 years after the founding of the UN, whose purpose it was to stop such heinous acts ever happening again, our fellow Europeans endured a genocide. Over 8,000 mainly Muslim men and boys lost their lives and tens of thousands more were forcibly expelled from their homes. We owe it to the victims and their families always to remember what happened in Srebrenica. We must reflect and learn from these events, to ensure similar crimes never happen again. On the 15th anniversary of the Responsibility to Protect (R2P), the commitment endorsed by all UN Members States in 2005 to protect populations from genocide, crimes against humanity, war crimes, and ethnic cleansing, the lessons for the UN remain as relevant today as they were 25 years ago.

In this year of important anniversaries we must remember victims on all sides of the conflicts of the 1990s. People from across the region are still living in divided communities, they are still missing loved ones, and they are still pursuing justice.

It is gravely concerning that revisionist rhetoric is still so prevalent. Individuals often distort established facts, including through the denial of war crimes and other atrocity crimes, for their own gain. We owe it to the victims to be clear: what took place at Srebrenica was a genocide, the UK stands by the verdicts of the International Criminal Tribunal for the former Yugoslavia (ICTY) and International Court of Justice in this definition.

Overcoming the legacies of the past is vital for countries in the region to achieve their Euro-Atlantic ambitions. It was a pivotal moment when Leaders at the Western Balkans Summit in London in 2018 signed three landmark joint declarations, underlining the importance of identifying the missing, bringing perpetrators to justice, rejecting hate speech and the glorification of war criminals while promoting a culture of respect for and solidarity with all victims. Western Balkans leaders also agreed that verdicts from international and domestic courts must be respected.  The UK is proud to support the reconciliation agenda in the Western Balkans, politically and practically, and will continue to do so.

There are also lessons for us, as the UN family. We should mark here the important role the UN has played through the ICTY and its Residual Mechanism, which continues the ICTY’s legacy by fighting to end impunity. The verdicts of genocide against Radovan Karadzic and Ratko Mladic showed that the international justice can succeed, even if it takes time, in delivering justice. And as we also heard from Amina Mohammed, this justice is critical for the victims’ closure, on both the individual and national level.

And as we pause to reflect and learn from the events of Srebrenica, we are reminded of the necessity to resource and mandate peacekeeping missions effectively to ensure such loss of life never occurs again.

The scars of Srebrenica will always be present. We must support those who seek to heal the wounds of the past. We owe it to all those who lost their lives in the conflicts to work together to help build a safe and prosperous future for all.

Reflecting on the genocide in Srebrenica, 25 years on