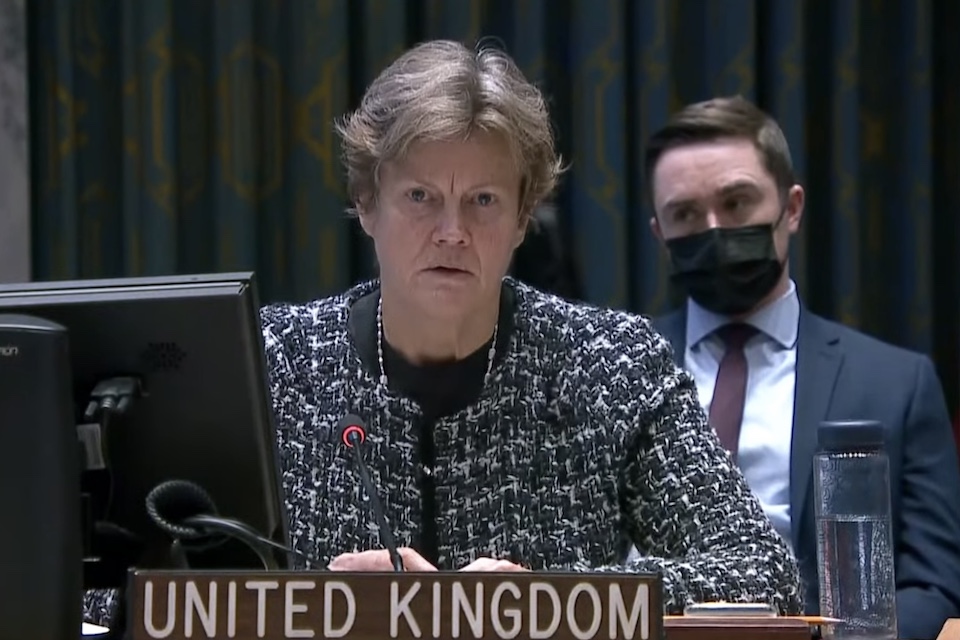 Thank you, Mr President, and I start by thanking our briefers Filippo Grandi and Martin Griffiths.

As a result of President Putin’s decision to launch a full-scale invasion of Ukraine, a country of 44 million people is now on the brink of humanitarian catastrophe.

Whatever my Russian colleague claims, the world can see Russia’s indiscriminate attacks against men, women and children across Ukraine, and its disregard for international humanitarian law.

Missiles have rained down on Kharkiv, with cluster munitions hitting residential areas and injuring residents. Disruption to supply chains has caused food shortages in Kramatorsk.

The reckless bombing of an oil depot in Vasylkiv, has unleashed toxic fumes in nearby communities.

Violence in Kyiv has forced people to seek refuge underground, with many thousands, including the elderly and disabled, unable to evacuate.

And as we’ve heard from the UN, today, hundreds of civilians have been killed as a result of the Russian invasion.

My Russian colleague may try to paint the UN’s reporting as hysteria.

Just as they said it was Western hysteria to warn of their impending invasion.

But let’s look at the facts: half a million people have already fled to Poland, Hungary, Romania, Moldova, Slovakia and other countries. 7 million people have been displaced and that figure, as the High Commissioner told us, is rising exponentially.

UN agencies and humanitarian partners have been forced to suspend operations.

In this moment, as the High Commissioner said, of urgent need, the situation that the agencies face is impossible.

The UK stands with the Ukrainian people during their time of need.

This latest assistance package brings the total amount of UK Government aid pledged to Ukraine this year to $190 million.

Last week, Prime Minister Johnson also announced the UK would guarantee up to $500 million of loans to Ukraine through the Multilateral Development Banks.

The UK will also participate in tomorrow’s UN appeal.

UK Government experts have also deployed to the region to provide humanitarian support to those fleeing violence in Ukraine.

We know that a humanitarian response is not enough to save the Ukrainian people from the disaster that Russia is inflicting on them.

So our message today is simple:

Once again, for the sake of humanity, we call on President Putin to stop this war and withdraw his forces from Ukraine.

Foreign Secretary statement on Xinjiang: 24 May 2022