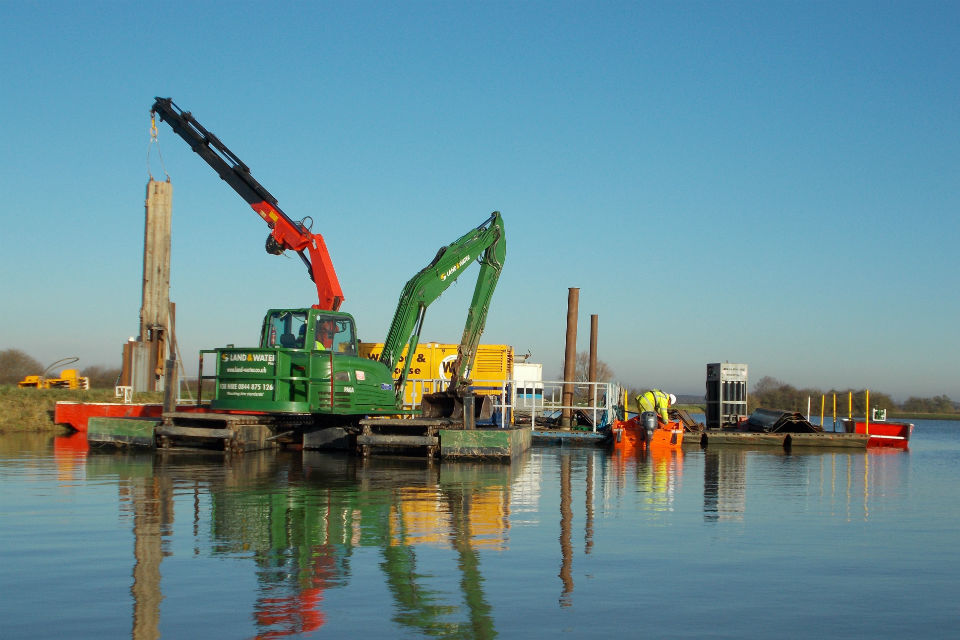 Work started over the weekend to fix the breach at the Barlings Eau using pontoons and amphibious diggers to access the riverbank. Teams will install at least 40m of piling in the bank. How long this takes will depend on weather and ground conditions, but once it’s complete, flood water will be pumped off the farmland, and soil and clay will be used to rebuild the bank around the piling.

Meanwhile, repairs are also underway at Timberland Delph, where Environment Agency teams moved 100 1-tonne sandbags and equipment into place over the weekend to help protect the bank from further damage. Pumps are shifting floodwater from the farmland and soon long-reach diggers will set to work plugging the breach with an estimated 1,000 tonnes of clay. Once the clay is in place, piles will be installed to strengthen the bank.

Temporary repairs also remain in place on the Billinghay Skirth, where a number of homes have been protected while engineers plan a permanent fix.

Elsewhere around the county, inspections are being carried out and smaller repairs are underway to fix some locks, pointing doors, and banks that overtopped, eroded, or experienced seepage when they were under pressure from the high volume of water for a prolonged period of time.

Lincolnshire had more than twice its usual amount of rainfall this autumn, with 110mm falling in November alone. This was on top of twice September’s average rainfall and two and a half times the usual rainfall for October.

Despite the intense weather – which set record levels on the Rivers Witham and Ancholme, caused surface water flooding and saturated the ground – flood defences across the county held up well, defending thousands of homes.

The Brant, Till, Market Rasen, Freshney, Louth and Horncastle flood reservoirs protected around 8,000 properties, while 1,000 miles of raised embankment successfully held the waters back from around 180,000 properties at risk of flooding.

Despite the extreme rainfall that pushed our rivers to their limits – and the fact that a third of Lincolnshire is below sea level – the vast majority of homes, businesses and land has remained safe from flooding. In fact, less than 1% of the county’s agricultural land has been affected.

But we know how devastating flooding can be for those affected, which is why we’re completing repairs as quickly as possible. This work will have to be done in stages, but throughout the process, we’ll continue working closely with the IDBs and the NFU, and we are in near daily contact with the landowners affected, giving advice, guidance and updates on our progress.

Over the coming days and weeks, Environment Agency teams will continue to carry out inspections, monitor defences, and carry out any further repairs as needed.

Although minimal rain is forecast for the next week, meaning river levels will drop back to more normal levels and the ground will begin to dry out, local people are still being reminded to check their flood risk and sign up for alerts and warnings at www.gov.uk/flood or by calling 0345 988 1188.