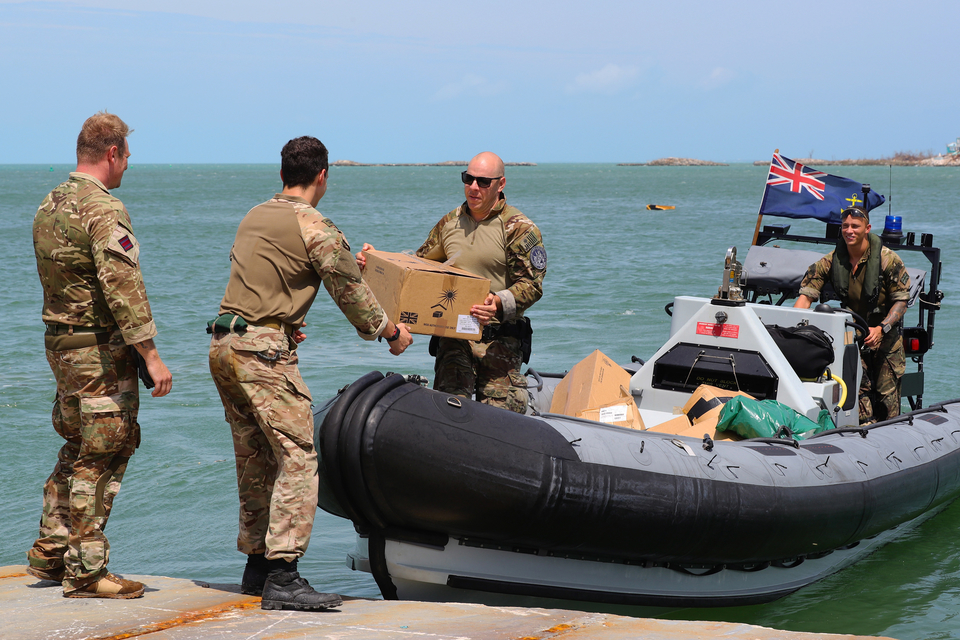 The successful search and rescue mission took place yesterday. The individual was removed from the rubble and brought back to RFA Mounts Bay to be treated by the team of Royal Navy medics onboard and was provided with emergency medication before being airlifted to the capital, Nassau. The Wildcat also conducted a casualty evacuation of an American woman, her two children and a baby to Nassau.

We are tasked to provide reconnaissance and assistance where necessary and it is always rewarding to know that you have made a significant difference, not only to the wider island, but to the individual families of those affected.

The patients were in a poorly condition and required immediate medical care. It was hugely rewarding to utilise my training and skills to provide essential and immediate lifesaving care to this family.

The wildcat has proven time and again its vital importance in support of our mission, be it the delivery of essential relief ashore, conducting reconnaissance or undertaking lifesaving search and rescue tasks.

The RFA Mounts Bay crew have so far delivered shelter kits, ration packs and water. The Wildcat will also be airlifting relief to outlying, cut off communities in liaison with the Royal Bahamian Defence Force.

Having delivered vital aid to Great Abaco and worked closely with the Royal Bahamas Defence Force and international aid agencies on the immediate relief effort, RFA Mounts Bay will today move to Freeport on Grand Bahama – one of the worst hit islands in The Bahamas.

She will bring ashore her heavy plant equipment such as all-terrain quads, dump trucks, and diggers. RFA Mounts Bay’s specialist crew and kit make her best placed to open the port and clear the airport runway so more international aid, including relief arriving from the United States, can reach the island.

The ship has been in the Caribbean since June in preparation for the hurricane season and was re-tasked last week to sail to The Bahamas in anticipation of Hurricane Dorian, the strongest ever recorded in The Bahamas.

RFA Mounts Bay has embarked a dedicated Humanitarian and Disaster Relief team, and is carrying vital aid and specialist equipment. It also stores Department for International Development water carriers, hygiene kits including basic items such as soap, and shelter kits. Since Hurricane Dorian hit, a liaison officer from the Royal Bahamas Defence Force and a DFID humanitarian expert have been onboard to help coordinate the relief efforts.