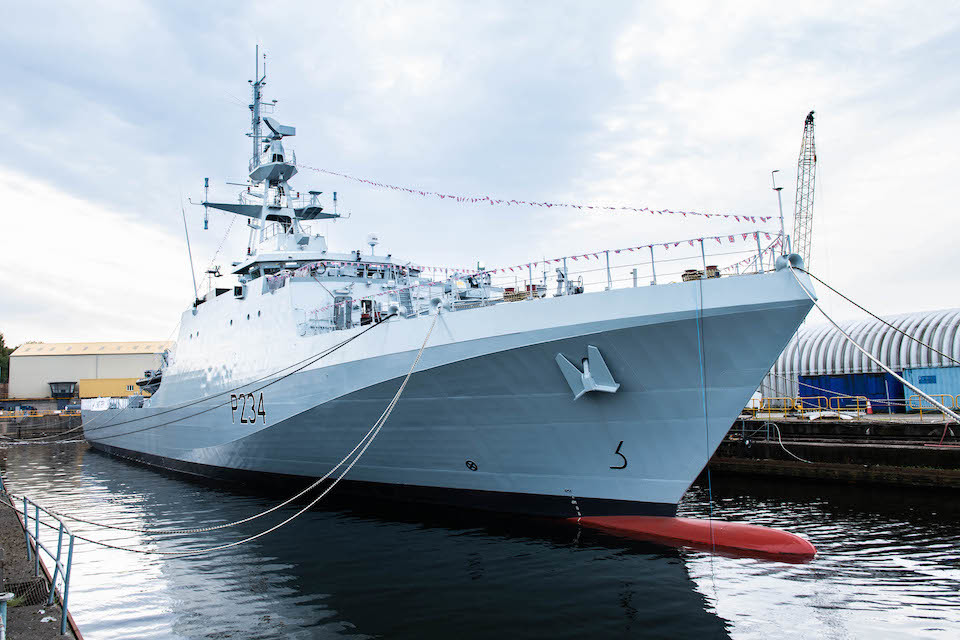 The next-generation River Class ship, equipped with a 30mm cannon and flight deck capable of accommodating a Merlin helicopter, will boost Britain’s counter-terrorism and anti-smuggling work and provide essential support to defence operations.

The 90-metre vessel is the final of a five-strong OPV contract with BAE Systems, worth a combined £635 million.

Our Offshore Patrol Vessels play a pivotal role in patrolling our coastline, protecting our domestic waters and supporting maritime interests from anti-smuggling to fisheries protection.

The naming of HMS Spey is an exciting milestone for the OPV programme, demonstrating our commitment to UK shipyards while bolstering the Royal Navy’s capabilities.

At Scotstoun today, the ship was officially named HMS Spey by her lady sponsor, Lady Alison Johnstone. The centuries old tradition believed to bestow luck, saw a bottle of Speyside Distillery whisky being smashed against her hull.

Initially constructed in BAE System’s Govan yard, all of the five OPVs were then moved to the company’s Scotstoun site to be fitted out with their systems ahead a series of sea trials aimed at testing their capabilities.

Construction of the OPVs for the Royal Navy, alongside the Type 26 anti-submarine frigate programme, has meant the Glasgow shipyards’ order books are full until the early 2030s   In doing so this has protected 1,700 Scottish jobs and supported a further 2,300 roles across the nation through the supply chain.

Today marks an important step toward the MOD’s vision to establish a common shared architecture across all Royal Navy warships.

HMS Spey is the fifth and final ship in the OPV programme and will play a vital role defending the UK’s interests.

It is great to see HMS Spey join her sister ships and I would like to thank the team at DE&S, our industry partners and the Royal Navy for working together to ensure this important milestone was achieved. Everyone can rightly be proud of what we have accomplished.   The delivery of the OPV programme is fulfilling a key commitment of the Strategic Defence and Security Review 2015 and is part of the Government’s £178 billion plan to provide the UK’s armed forces with the best possible equipment.

All the Batch 2 OPVs, HMS FORTH, HMS MEDWAY, HMS TRENT, HMS TAMAR and HMS SPEY, are set to be delivered to the Royal Navy by the end of 2021.