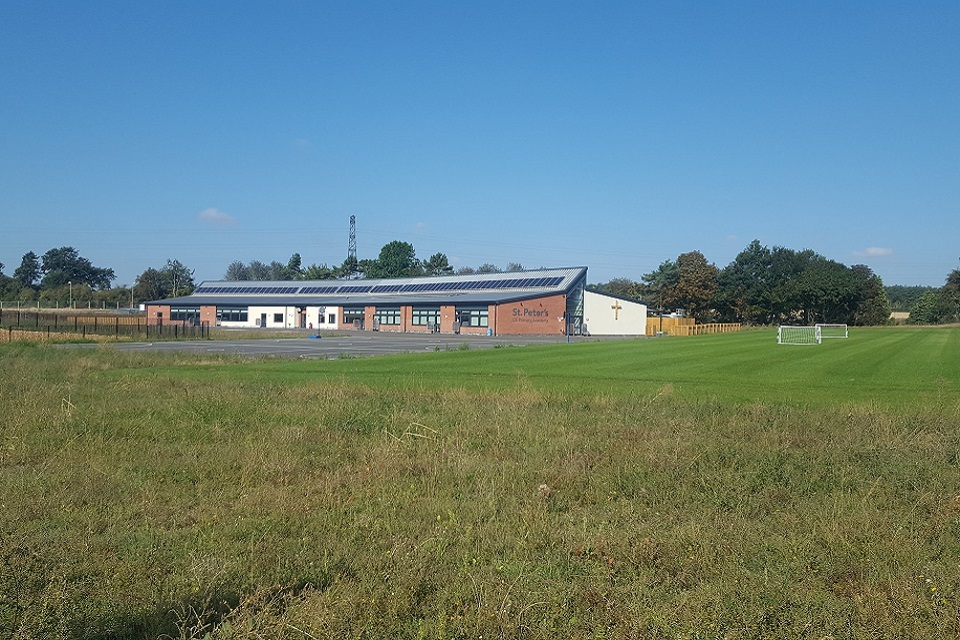 Rural sports clubs, schools and churches could power their buildings with clean electricity, cut their bills and reduce emissions thanks to a £10 million government fund.

One beneficiary of the Rural Community Energy Fund (RCEF), a project in Frome which included Frome Town FC, installed over 200 kW of solar capacity – enough to power 2,000 light bulbs and strip 333 tons of CO2 being pumped into the local environment. It also generated almost £70,000 for the local community by selling extra solar electricity back to the grid.

New community projects across England are now being encouraged to apply for feasibility grants of up to £40,000 for green initiatives, including solar battery storage, wind, hydro and geothermal heat projects. Viable proposals will also be considered for further grants of up to £100,000 for business development and planning applications, as the government hopes to increase energy self-sufficiency in rural communities and boost jobs in green technology.

It comes just days after the government became one of the first major economies to legislate for net zero emissions by 2050.

It will take all corners of the country and sections of society to help us to tackle climate change on our path to becoming a net zero emissions economy and communities are at the heart of our mission for a greener planet.

This £10 million fund can help sports clubs, churches and schools not only save money and reduce emissions by creating their own clean energy but also make money by selling it back to the grid.

The RCEF has already supported 152 community renewable energy projects in rural areas helping generate around 105,000 kW of electricity – enough to power the equivalent of nearly 30,000 homes. It’s also helped generate thousands of pounds for community coffers thanks to selling electricity back to the grid.

Climate change is going to hit us all hard. The flood risk to Salisbury has, according to the most recent Environment Agency data, risen significantly. This makes the move towards making Salisbury zero carbon all the more important. These grants have enabled us to take the crucial first steps in creating green community assets for our historic city.

The RCEF funding, which is to be managed by 5 Local Energy Hubs around England, is designed to catapult rural areas into the ‘clean growth’ revolution, helping people living outside urban areas benefit from the income-generating potential of renewable energy.

Communities: find out more. Applications for the new scheme will be managed by 5 regional Local Energy hubs across the UK and hosted by a local authority in each area.

1. The Rural Community Energy Fund (RCEF) is a £15 million programme, jointly funded by the Department for Environment, Food and Rural Affairs (Defra) and the Department for Business, Energy & Industrial Strategy (BEIS). It supports rural communities in England to develop renewable energy projects which provide economic and social benefits to the community. Find out more about RCEF.

A local representative within the relevant Local Energy Hub will be able to provide tailored support on local planning matters.

3. Some of the projects helped by the RCEF include:

a. Frome County Council (Somerset): Solar panel installations at Frome Medical Practice and Frome Town FC have stripped 333 tons of CO2 – the equivalent produced by 56 cars every year – out of the local air, as well as helping the practice and football club generate over £68,000 in extra revenue by selling energy back to the grid.

b. Salisbury Community Energy (Wiltshire): RCEF funding has helped 8 projects in the historic city ranging from:

c. Avalon Community Energy (Somerset): Projects in Brookside and Evercreech are set to save 52 tonnes of CO2 emissions per year – with the profits used to establish a community benefit fund to help support local initiatives.

d. Dane Valley Community Energy (Cheshire): Eaton Bank Academy in Congleton are harnessing the power of a roaring waterfall by using the funds to install hydropower generators on the Havannah Weir on the River Deane. Once installation is complete the project will generate 250MW a year – enough to power 80 houses. It will also generate almost £5,000 for local charities a year by selling extra electricity back to the grid.

e. Alston Moor Community Energy (Cumbria): The RCEF helped Alston Primary and Samuel Kings Secondary schools install 27 kW solar of panels. Over the next 20 years the project expects to bring £70,000 of profit to the school by selling energy back to the grid while saving over 150 tonnes of carbon.

f. Wigton Baths Trust (Leicestershire): A local group from Wigton with a passion for fighting climate change have benefited from £20,000 from the government’s RCEF to carry out feasibility studies into the installation of solar panels at the site. They are supporting the installation of 40 solar panels on the local swimming pool which will be used to generate 10 kW of power for use on site or for export back to the grid for a profit. The extra revenue will help the facility get back on its feet after a recent closure.

Environment PM Theresa May: we will end UK contribution to cli…