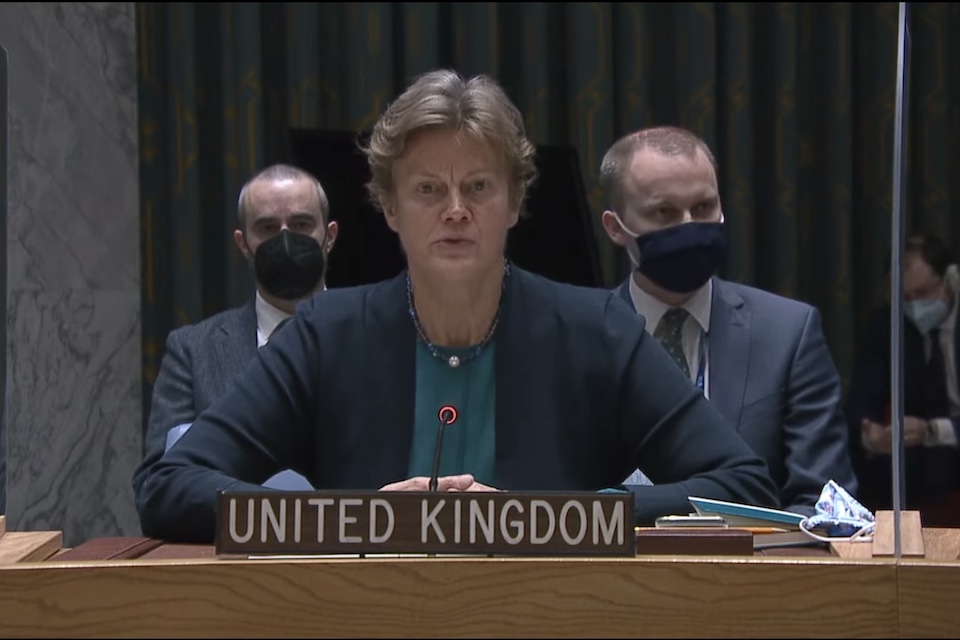 The UN Charter begins with the solemn invocation to peace:

“We the peoples of the United Nations determined to save successive generations from the scourge of war.”

That conviction has been the touchstone of the work in this Chamber since 1945.

We must not forget that our fundamental purpose here is to protect people and their futures.

To protect people from violence and conflict that destroys lives.

As we speak, women and children in Kyiv, young families in Odessa, pensioners in Kharkiv, and civilians all over Ukraine, are sheltering from Russia’s military onslaught.

First, Russia claimed this was all Western hysteria.

Then, they said it was about Donetsk and Luhansk.

Now, they are bombing Kyiv.

We have seen dreadful images of Russian tanks crushing civilians in the Ukrainian capital.

A country of 44 million people is being attacked on all fronts.

The resolution we are voting on today is a message to those people: that the world is on your side and stands with the Ukrainian people.

It’s a message to the world: that the rules we built together must be defended. Because otherwise, who might be next?

It’s a message to Russia as well.

To the brave Russian citizens who are protesting a war they do not want.

This resolution demands an end to this war.

President Putin has launched a massive invasion of Ukraine. His aim is to remove its government and subjugate its people.

No fog of war is thick enough to obscure a truth this clear.

This is not self-defence under Article 51.

It is naked aggression.

It is an unprovoked, unjustified war, and this Council must condemn it.

A large majority of the Council has just voted in favour of a resolution aimed at stopping war.

The resolution has not been adopted only because of the single veto of the permanent member of this Council who is perpetrating that conflict.

Russia claims that its invasion of Ukraine is in self-defence. This is absurd.

Russia’s only act of self-defence is the vote they have cast against this resolution today.

Make no mistake: Russia is isolated.

It has no support for the invasion of Ukraine.

History will record how we voted today and which countries stood up to be counted in defence of the Charter and the sovereignty and territorial integrity of Ukraine.

The United Kingdom stands steadfast in support of the Ukrainian people and will hold Russia accountable for its aggression.

Foreign Secretary statement on Xinjiang: 24 May 2022