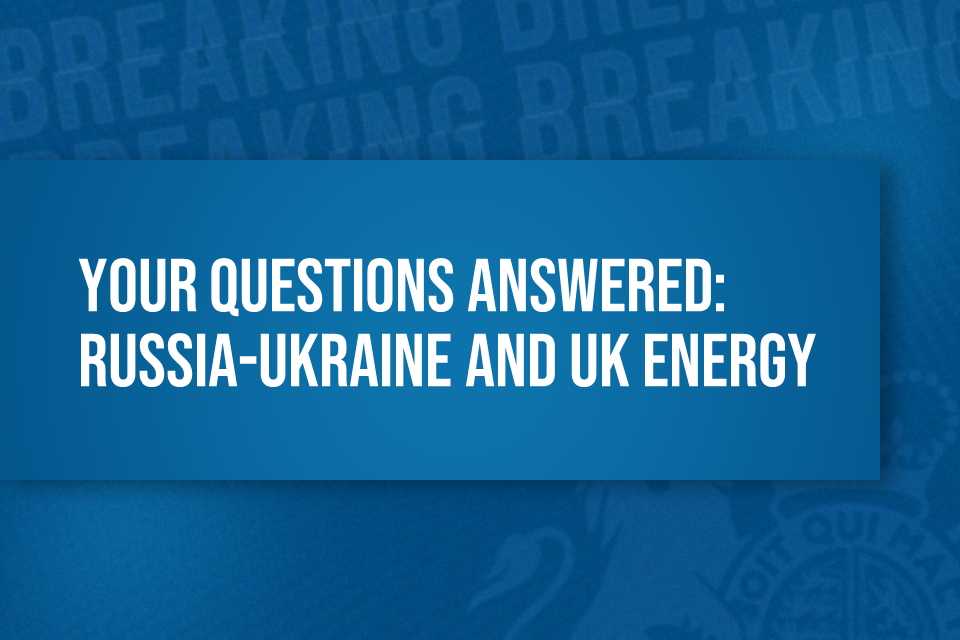 Is the Government confident that gas supply will not be disrupted?

Yes. The current situation facing the UK is not a question of security of gas supply, but of high gas prices set by international markets.

Unlike other countries in Europe, the UK is in no way dependent on Russian gas supply. Our single largest source of gas is from the UK Continental Shelf and the vast majority of imports come from reliable suppliers such as Norway.

There are no gas pipelines directly linking the UK with Russia and imports from Russia made up less than 4% of total UK gas supply in 2021.

Great Britain’s highly diverse supply sources include pipelines from the UK and Norway continental shelf, interconnectors with the continent, and three Liquified Natural Gas (LNG) terminals, providing Britain with one of the largest LNG import infrastructures in Europe. Germany, for example, has no LNG import terminals.

What are you doing to diversify supply?

The UK’s exposure to volatile global gas prices underscores the importance of our plan to generate more cheap, clean renewable energy and nuclear power in the UK to reduce our reliance on expensive fossil fuels.

Thanks to the £90 billion investment we’ve been making in renewable energy since 2012, we already have one of the most reliable and diverse energy systems in the world.

As the Business and Energy Secretary has said, the more clean, cheap and secure power we generate at home, the less exposed we will be to expensive gas prices set by international markets.

It is vital European countries on the continent reduce their reliance on Russian gas both through alternative supplies, including the global liquefied natural gas (LNG) market – an increasingly important component of the global energy supply chain – and accelerating the transition to net zero.

This is a priority for our engagement with key international partners and we continue to work alongside them to achieve this.

What is the Government doing to mitigate any further energy bill increases for consumers?

The energy price cap has insulated millions of customers from volatile global gas prices during the winter months and will continue to do so.

We are taking decisive action to help more than 27 million households with rising energy costs, with a £200 reduction on bills this autumn and a £150 non-repayable reduction in Council Tax bills from April. This £9.1 billion package of support means the majority of households will receive a £350 boost to help with the financial pressures felt this next year by families right across the country.

This comes in addition to the existing £12 billion of support we already have in place to help families with the cost of living.

Should the public expect fuel prices at the pumps to rise?

The global price of crude oil has increased sharply over the past year, increasing petrol prices in countries across the world. This is a global trend and not just in the UK.

But we will do everything we can to mitigate that and to help the people of this country, but it is one of the reasons why the whole of western Europe must end its dependence on Russian oil and gas.

The £12 billion in support that we’ve already announced to help with the cost of living includes a freeze on fuel duty for the twelfth year in a row – the longest sustained freeze in British history.

We are in regular contact with the industry and making it clear that industry should not take advantage of increased demand to put up prices sooner than necessary.

Can we expect to see disruption to UK fuel refineries as a result of the sanctions or disruption to fuel being imported to the UK?

The UK is a significant producer of both crude oil and petroleum products.

In the case of diesel, UK demand is met by a combination of domestic production and imports from a diverse range of reliable suppliers beyond Russia including the Netherlands, Saudi Arabia, and USA.

Like other countries, the UK holds oil stocks in the unlikely event of a major oil supply disruption.

The level of oil stocks prescribed by the International Energy Agency (IEA) is accepted and adopted around the world as being sufficient to ensure resilience in the event of a major global supply disruption.

UK oil reserves are significantly above the 90 days required by the IEA.

What else is the Government doing to help address the cost of living?

We recently confirmed plans to go ahead with existing proposals to expand eligibility for the Warm Home Discount by almost a third so that three million vulnerable households will now benefit, as well as the planned £10 uplift to £150 from October.

We’re providing support worth around £12 billion this financial year and next to help families with the cost of living. We’re cutting the Universal Credit taper to make sure work pays, freezing alcohol and fuel duties to keep costs down, and providing targeted support to help households with their energy bills.

The further £12bn of support we are providing includes:

Climate Change Foul-mouthed landowner fined for obstructing and a…
0
✖