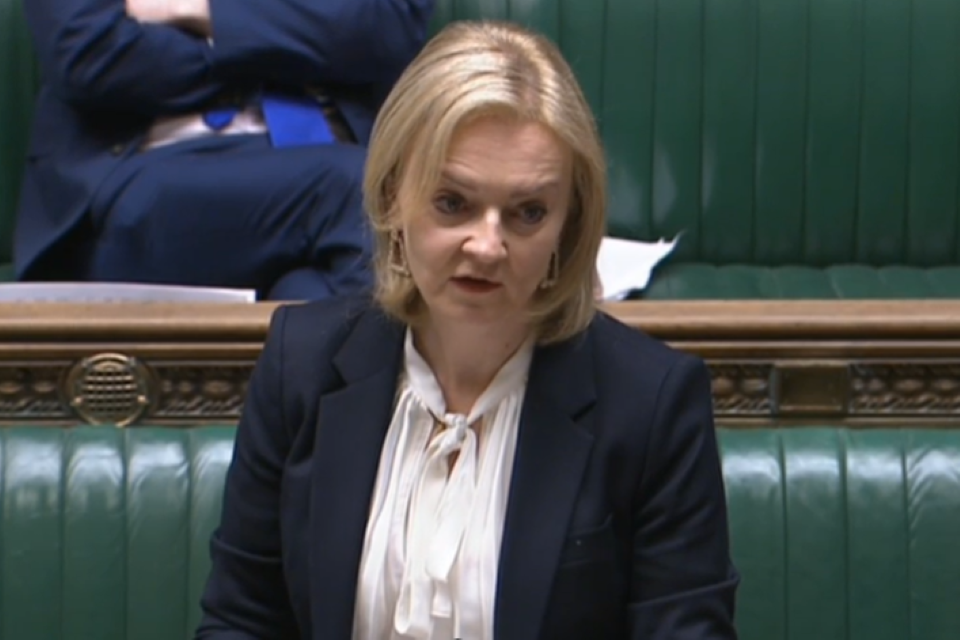 Before I start, I would like to welcome the Rt Hon Gentleman to his new role, and my Hon Friend to his new position as the Minister for Europe.

I want to update the House on what we are doing to tackle Russia’s aggression towards Ukraine.

In December I set out how, together with our allies, we will build a Network of Liberty to ensure that democracy doesn’t just survive, it thrives.

And of course, as a free, democratic country in Europe, Ukraine is a crucial priority.

30 years ago, Britain was one of the first countries to recognise Ukraine’s independence. Today our commitment to Ukraine is unwavering. We stand with our friend against hostile actors.

We will defend democracy at the frontier of freedom in Eastern Europe, and around the world. Britain and its allies made this clear at NATO in November, and at the G7 which I hosted in Liverpool last month.

Any Russian military incursion into Ukraine would be a massive strategic mistake and would come at a severe cost. We will not accept the campaign Russia is waging to subvert its democratic neighbours.

It is accompanied by baseless rhetoric and disinformation. They falsely cast Ukraine as a threat to justify their aggressive stance. They falsely accuse NATO of provocation. This could not be further from the truth.

Ukraine’s restraint has been commendable and NATO has always been a defensive alliance. Russia is the aggressor here. They have massed a huge number of troops along the Ukrainian border and in illegally-annexed Crimea.

There is no justification whatsoever for Russia’s bellicose stance towards Ukraine. It is unprovoked. It is part of a wider pattern of behaviour by the Kremlin, reliant on disinformation and mistrust to seek to gain the upper hand.

Moscow has run a long campaign to subvert freedom and democracy in Ukraine, from the invasion of 2014 to cyberattacks, disinformation and the weaponisation of energy supplies. At the same time, they are backing the repressive actions of the Lukashenko regime in Belarus, sowing the seeds of discord in the Western Balkans, and threatening our friends in the Baltic.

I urge Russia to end its malign activity and stick to what has been agreed. That means the 1975 Helsinki Final Act, where Russia signed up to dispute resolution by dialogue rather than force.

It means the 1994 Budapest Memorandum on Security Assurances, where Russia agreed to uphold Ukraine’s territorial integrity. Ukraine gave up its nuclear weapons in exchange for this security guarantee.

And it means the 2014 Minsk Protocol, where all parties agreed to a ceasefire in the Donbas region.
These agreements based on the principles of freedom, democracy and the rule of law must be upheld.

The free world must rise to meet the moment. Britain is stepping up and leading by example.

I have spoken out against Russian aggression at the OSCE and NATO, and bilaterally with Russian Foreign Minister Sergey Lavrov.

Last month I chaired a meeting of the G7 Foreign Ministers in Liverpool. We called on Russia to de-escalate, pursue diplomatic channels and abide by its commitments on the transparency of military activities. We made clear that any further military incursion into Ukraine would bring massive consequences, including coordinated sanctions to impose a severe cost on Russia’s interests and economy.

The UK is working with our partners on these sanctions, including high-impact measures targeting the Russian financial sector and individuals. We are also providing crucial economic and security support to Ukraine.

I am working closely with Foreign Minister Kuleba. I spoke to him on Tuesday, and last month I welcomed him to London for high-level talks.

We are continuing to help Ukraine strengthen its defences with joint exercises, maritime support and by training over 20,000 members of its army, with more to come. We are ramping up support for trade in priority industries like technology and clean energy to £3.5 billion. This includes £1.7 billion to boost Ukraine’s naval capability. I look forward to visiting Kyiv later this month.

We are also supporting stability in the Western Balkans, where the Prime Minister has appointed Sir Stuart Peach as Special Envoy.

In Belarus, we were the first European country to put sanctions on the Lukashenko regime, and we were also the first to send in engineers to assist Poland.

The next week will be absolutely critical for peace and security in Europe.

Tomorrow I will join an extraordinary meeting of NATO foreign ministers. The US-Russia dialogue begins on Sunday, followed by the NATO-Russia Council on Wednesday and the OSCE Permanent Council on Thursday.
We will be talking on the basis of freedom, democracy and the rule of law.

It is vital that NATO is united in pushing back against Russia’s threatening behaviour. Together we must hold Russia to its longstanding obligations. There can be no rewards for aggression.

Finally, Europe must reduce its dependence on Russian gas. Britain remains opposed to Nord Stream 2. I am working with allies and partners to highlight the strategic risks of this project.

We are reaching a crucial moment. The only way forward is for Russia to deescalate and pursue a path of diplomacy. We will continue to stand together with our allies, steadfast in support of Ukraine and its future as a free and sovereign democracy.

International Affairs Uniting to stop the proliferation of chemical weap…
0
✖