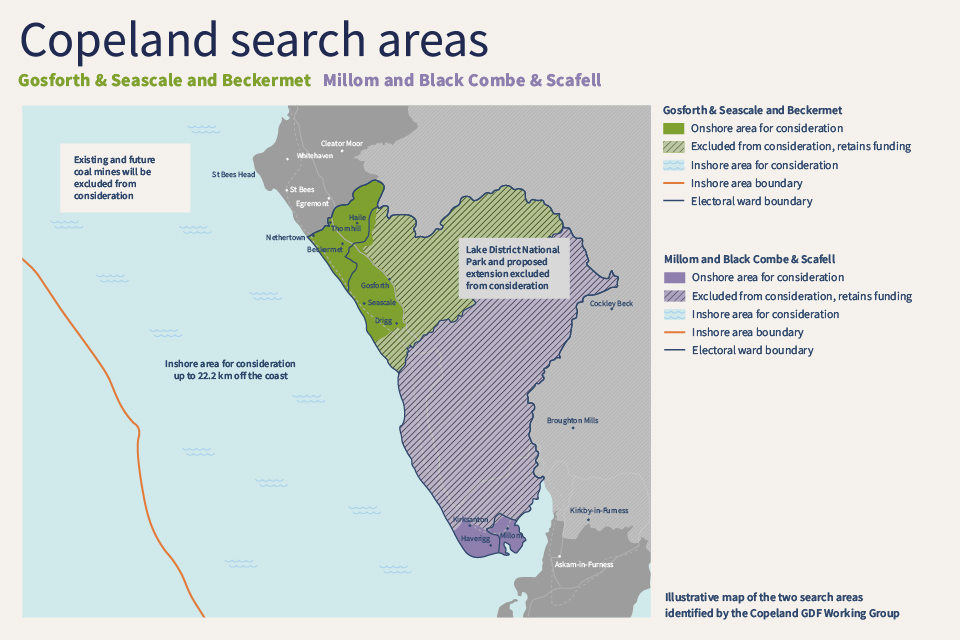 RWM has welcomed the proposal of two areas in Copeland, Cumbria, where it could begin to search for a site that might be suitable for a GDF.

The Working Group, whose members include RWM, is proposing that two Community Partnerships are formed in Copeland, relating to two Search Areas based on district electoral ward boundaries.

Deep geology beyond the coast is also being considered for the underground elements of a GDF. The Working Group has recommended that RWM considers this area. This means a surface facility on the coast could provide access to a disposal area deep in the rock beyond the coast.

The proposed Community Partnerships are the next step in the siting process after the Working Group and will consider the possibilities of GDF siting in more detail. The partnerships must have at least one relevant principal local authority, alongside RWM as developer, together with organisations and individuals that reflect the make-up of the community. Its activities would include public engagement and creating a ‘Community Vision’ for the long-term well-being of the community.

Setting up the longer-term Community Partnerships would trigger access to up to £1 million per year of community investment funding, available for projects and initiatives that drive economic development of the area, enhance the local environment or improve community well-being. This figure would rise to up to £2.5 million a year if deep borehole investigations subsequently start, as part of the process to better understand the geology. The Community Partnerships will decide which projects get funded.

RWM has been fully engaged with the Copeland GDF Working Group as it has begun to consider a GDF locally. It has been a real privilege to join the Working Group’s community engagement and listen to local views, answer questions, and explain this vital project.

We welcome the progress made by the Working Group, and we endorse the areas identified. In particular it’s important that they exclude the Lake District National Park and any proposed extension, and existing or future coal mines in Copeland. We fully support the proposed formation of Community Partnerships to take the process forward.

Community Partnerships create the forum for local people and organisations to shape the siting process. The consent of people in those search areas will be absolutely essential. If Community Partnerships are established, each will unlock initial funding of up to £1 million for initiatives in each area, ensuring that people and organisations immediately enjoy tangible benefits from participating.

Copeland GDF Working Group was the first to form in England and was followed by a second in Allerdale. RWM continues to hold informal discussions in other parts of the country that may lead to the formation of additional Working Groups.