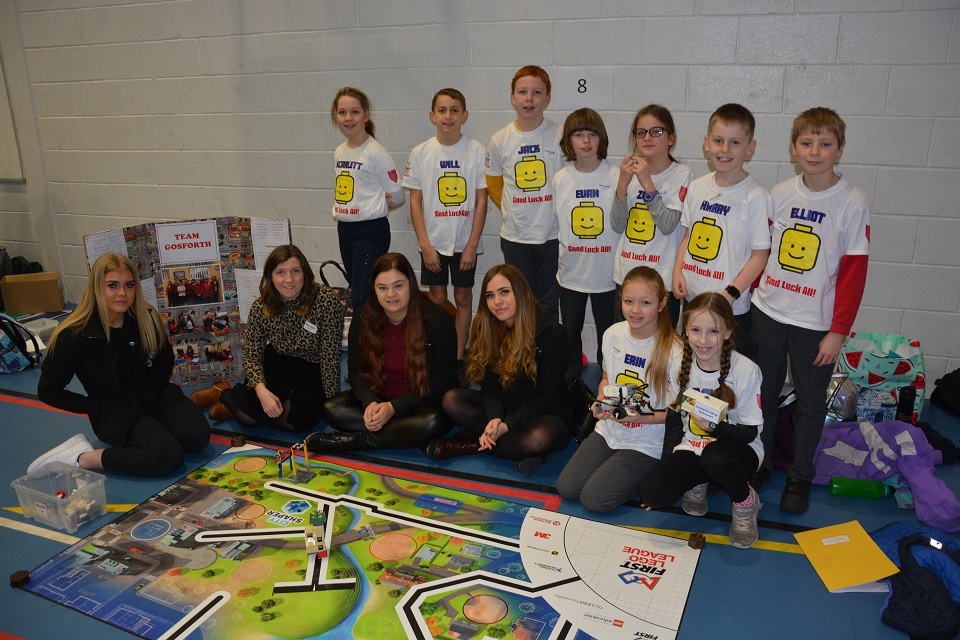 The LLWR sponsored Gosforth Primary School are making the long journey to Bristol for the England and Wales final of FIRST Lego League after winning the regional tournament.

LLWR’s Tom Fletcher, a volunteer with Team Gosforth, said the win, at Lakes College, near Workington, was well deserved.

“Team Gosforth put in a lot of effort, and team members proved themselves thoughtful, cheerful and conscientious along the way, thinking about big issues like accessibility and climate change as they addressed a local problem,” he added.

“They’re now headed to Bristol to compete at the national tournament. The LLWR coaches could not be prouder.”

Hard on their heels were a second LLWR backed school, Millom, who finished runner up on the day, with the support of LLWR volunteer Becky Ruddy.

Lego League comprises 3 strands: the project; the robot challenge and Core Values. Each is assessed separately, and then results are compiled to identify an overall winner.

This year, the tournament theme was ‘City Shaper’, and the teams had to run a project about a problem faced by a local building or community space.

Team Gosforth chose the problem of parking in their village and had worked hard since September to investigate the issue. They interviewed local businesses and councillors, completed questionnaires with nearby office workers, conducted fieldwork and compared the costs and benefits of different solutions.

In the end they put forward the idea of a delivery van that would enable continued access to shop services, whilst taking cars off the road. Meanwhile, the team also had to learn how to programme a robot to complete various city themed challenges.

Paul Pointon, LLWR Managing Director, said: “Four years ago, when Pete Woolaghan, of REACT Engineering, asked us to get involved in First Lego League we were happy to accept and contribute to his vision of one day having 100 Cumbrian schools take part.

“Lego League’s Core Values, Discovery, Innovation, Impact, Inclusion, Teamwork and Fun, are exemplary, and getting involved has put us at the heart of our community. We’re proud to play a part in shaping the engineers and problem solvers of tomorrow.

“We’ve shown our commitment with a £25,000 contribution, over 5 years, and we also utilise Lego League as a developmental tool for employees. Several of our apprentices volunteered this year, including 3 at Gosforth, and this can only be beneficial in their roles at LLWR.

“Best of luck to Gosforth in the final, but, along with Seascale and Millom, they are already winners to us.”

Sarah Layzell, Assistant Head Teacher of Gosforth Primary, said: “I was in utter disbelief when it was announced we had won, and the children were so pleased, they couldn’t believe it.”

The national final will be held on 22nd February and Team Gosforth will use the intervening period to hone their skills. But Sarah is not getting her hopes up.

“We are going there for the experience,” she said.