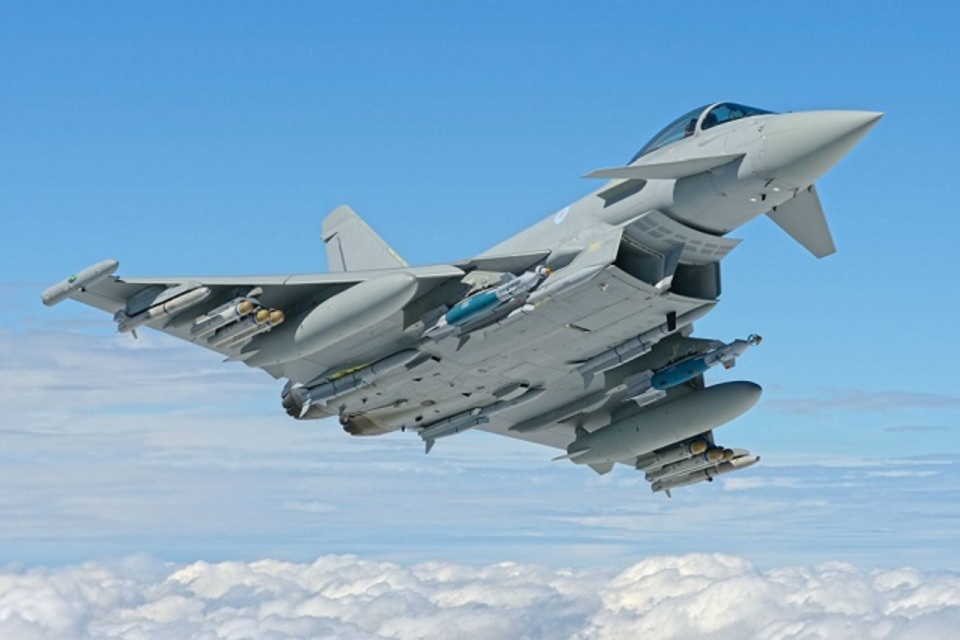 The Leonardo and BAE Systems plants in Edinburgh (300 jobs) and Dunfermline (100 jobs) pick up two-thirds of the 600 UK jobs that will be supported by the £317-million order.

It is vital that our Armed Forces are equipped with the latest technology to counter emerging threats from our adversaries.

Today we announce the investment in the latest in radar technology for our fighter jets. This demonstrates our commitment to maintaining security in the air whilst supporting highly-skilled jobs across the UK.

Typhoon aircraft will be equipped with next-generation radar thanks to £317-million investment that will allow it to locate, identify and suppress enemy air defences using high-powered jamming.

The integration of the new European Common Radar System (ECRS) Mk2, which is based on Active Electronically Scanned Array (AESA) technology, will provide a capability edge in the increasingly contested battlespace.

Currently fitted with mechanically-scanning radar, the Typhoon is designed to be continuously upgraded to meet operational demand no matter the challenge or threat. The ECRS Mk2 will allow the aircraft to simultaneously detect, identify and track multiple targets in the air and on the ground in the most challenging environments.

The MOD’s equipment plan is supporting Scottish business, jobs and skills far into the future; helping to make Scotland one of the most competitive places in the world to innovate, build business and deliver security.

This £317-million radar contract and the 400 jobs in Edinburgh and Dunfermline it supports clearly shows yet again that not only does defence play a crucial part in the security of the United Kingdom but it also significantly contributes to Scotland’s prosperity in high-skilled employment and investment.

Our nation has a proud military history and UK Government defence investment here will ensure there is a bright future with latest Ministry of Defence figures showing that procurement spend in Scotland has risen to £1.76-billion a year, supporting more than 10,000 Scottish industry jobs.

Figures published earlier this year showed MOD procurement spend in Scotland has risen to £1.76-billion in 2018/19, the fifth year running there has been an increase.

This is up from £1.64-billion the previous year and an increase in per person spend to £320.

And the number of Scottish industry jobs this supports has increased from 10,100 to 10,200.

Scotland will see a further £1.5-billion of defence investment in infrastructure over a 10-year period on improved facilities at Faslane, Coulport and RAF Lossiemouth.

Thousands of regular personnel and reserves are based in Scotland.

A further 550 extra military personnel and their families will be based in Moray by 2024 and the number of personnel at Her Majesty’s Naval Base on the Clyde is also increasing.

Further benefits of defence investment in Scotland include: