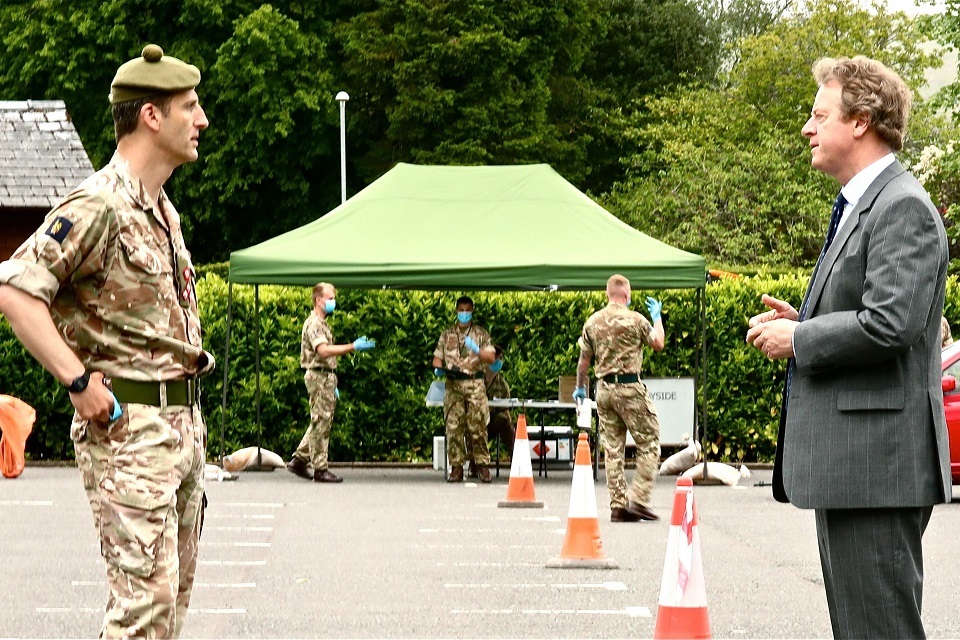 UK Government Scottish Secretary Alister Jack today visited [Friday 12 June] a mobile testing unit in Moffat. He saw how UK-wide testing is being expanded, with support from our Armed Forces, to help the UK in the fight against coronavirus.

Mr Jack was given a tour of the facility by Brigadier Robin Lindsay, Commander of the Joint Military Command for the COVID Response and met soldiers from Balaklava Company, 5 SCOTS, who are running the unit.

The UK’s Armed Forces are supporting the UK Government’s testing programme, operating 13 mobile testing units across Scotland. From the Isle of Skye and Thurso in the north, to Dumfries and Galloway and the Scottish Borders in the south, they are helping maximise coronavirus testing capacity. Each mobile unit has the capability to test up to 500 people per day.

The UK Government is also funding six drive-through testing sites in Scotland (in Glasgow, Edinburgh, Dundee, Perth, Inverness and Prestwick) and the Lighthouse ‘megalab’ in Glasgow to process samples.

With the 13 mobile testing units and six drive through centres combined, UK-Government-funded testing capacity in Scotland is more than 13,000 tests per day.

As well as operating mobile testing units in Scotland the Armed Forces have been heavily involved in helping Scotland’s coronavirus response. This includes:

“The men and women of our Armed Forces are working tirelessly to support the UK-wide effort to combat the coronavirus pandemic.

“The mobile testing units, operating in some of our more rural areas, have been a huge support in helping Scottish people get tested – especially our key frontline workers. It was an honour to meet some of the troops today and I would like to thank them for all their hard work.

“It has been encouraging to see the number of coronavirus cases and deaths across the UK falling recently but we know we can’t be complacent. We all need to continue to follow the advice during these uncertain times as we start to see lockdown being eased.”