Shining a light on human rights violations in Syria 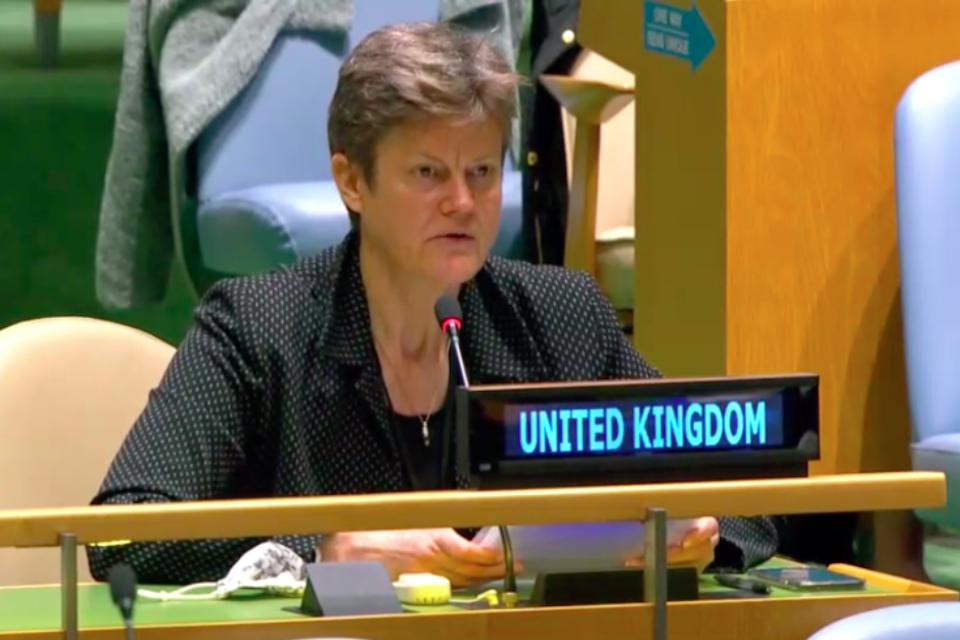 I’d like to start by thanking the Commission of Inquiry and the civil society briefers for their compelling testimony on the current situation in Syria, which underlines that the human rights violations and abuses that have characterized the conflict in Syria continue. These are human rights abuses that are real, harrowing, scarring violations of fathers, mothers, sisters, sons and daughters.

The report on arbitrary detention released by the Commission of Inquiry is of particular concern. The industrial-scale system of arbitrary arrests, torture prisons and enforced disappearances, are a clear attempt to silence the Syrian people. Moreover, their inhuman experiences and detention centres is designed to instill fear. Women and girls have faced rape, sometimes gang rape, and male detainees have endured rape with objects and also genital mutilation. Meaningful progress on the issue of detainees of missing persons is a central element of Security Council Resolution 2254. As a starting point, Syrian authorities should provide comprehensive lists of the names of all detainees clarifying the whereabouts of the 128,000 who have never emerged from arbitrary detention, including by providing their families with notifications of burial sites of detainees who have died.

The Commission of Inquiry documents 32 separate instances of the use of chemical weapons by Assad’s forces. Each use of a chemical weapon constitutes a war crime, and is the reason why the outstanding issues in Syria’s initial chemical weapons declaration are not academic in nature. We will continue to use monthly Security Council discussions to press for progress between the Syrian authorities and the OPCW’s declaration and assessment team.

I also want to reiterate the UK’s commitment to respond robustly to any further use of chemical weapons by Assad’s forces. It is important that we do not stand silent in the face of the atrocities documented by the Commission of Inquiry. Since 2012, the UK has contributed over $18 million to support Syrian and international efforts to gather efforts and assist victims of human rights violations and abuses, including support to the UN international, impartial and independent mechanism. We have supported doctors to produce over 360 forensic medical reports, which can act as court-standard evidence of sexual violence and torture. We have trained 118 doctors to conduct evaluations in accordance with the Istanbul Protocol standards. Our support to the Commission for International Justice and Accountability to gather evidence and prepare legal cases for use in national and international courts has contributed to the first conviction of a former member of Daesh and just last month, led to the first ever conviction of a former Syrian official, Eyed Al-Ghari, in Germany for crimes against humanity. This should send a clear message to the Assad regime that they cannot act with impunity.

We will continue to support this work, to shine a light on human rights violations and abuses in Syria and support the delivery of humanitarian aid to Syria.

I would like to conclude that as we mark the 10 year anniversary of the conflict in Syria, the only sustainable solution is a UN-facilitated political process, in line with Resolution 2254, which protects the rights of all Syrians and in which civil society, women and minorities play a role.

Shining a light on human rights violations in Syria

International Affairs Ensuring the UN is equipped to respond to current …