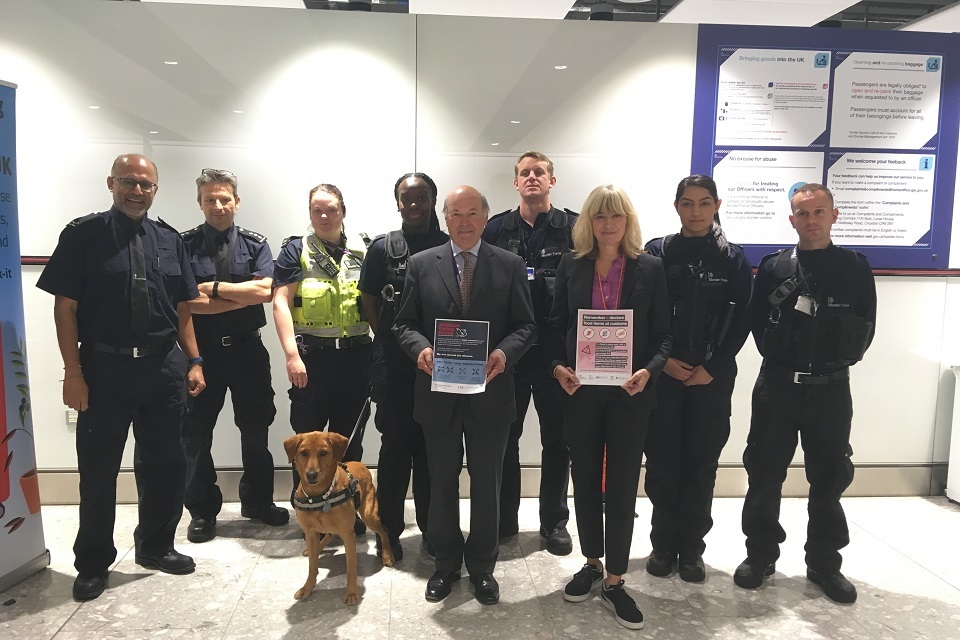 UK border officials enforce controls at the border on illegal meat by using sniffer dogs and searching freight, passengers and luggage. They will seize and destroy illegally imported meat products. This is because the disease is highly contagious and the virus can survive in pork meat products, even if cooked or frozen.

The operation was focused on passenger arrivals directly from South East Asian countries where African Swine Fever is prevalent.

It is essential that we keep African swine fever out of the UK and I would like to thank Border Force colleagues for taking the time this morning to show us all they do to prevent infected pork meat products arriving on our shores.

While there has never been an outbreak of African Swine Fever in the UK, we are not complacent and already have robust measures in place to protect against animal disease outbreaks.

The disease, which poses no threat to human health but is fatal for pigs, has already spread widely across Asia – including China and Vietnam – and parts of Central and Eastern Europe. Cases have also been reported throughout Sub Saharan Africa.

ASF has led to the deaths of over 800,000 pigs and wild boar in Europe and an estimated four million pigs in Asia, causing global pork prices to rise. If the disease was found in this country, it could have a devastating impact on the UK’s commercial pig stock of five million pigs, as well as the trade of our pork products.

This morning I witnessed first-hand Border Force’s great work to ensure the UK remains ASF-free. However, we all have a role to play and it is crucial that anyone travelling from affected regions doesn’t bring pork meat products into the UK.

In July, Defra launched a new campaign, working closely with the Devolved Administrations, at the UK’s border to help keep the damaging animal disease out of the country. We have also written to universities to ask them to contact international students about not bringing in meat products when they come to the UK to study.

The main ways that the disease can spread are: