Thank you very much. It’s a massive pleasure to be able to welcome all of you to this Transport Technology Innovation Showcase today.

I’d also like to welcome the Government Office for Science and of course the work they’ve done on this new Foresight report.

This is a terrific document. It is a very interesting and thought-provoking and subtle piece of work, and I think it’s going to make a big difference to how we think about mobility strategy in the years to come.

A new era in transport

The word “historic” is wildly over-used. But even so I think it is fair to say we are at a genuinely historic juncture for transport in this country.

We can think of the 19th century in terms of the coming of the railways and the astonishing social and economic and cultural changes which that created. And we can also think of the effects of the motor car in the 20th century and the changes that created.

But I want to suggest in the time-honoured fashion that we are on the cusp of something extraordinarily interesting, by way of a transport revolution for the 21st century.

As you will be aware, technology often has its inflection points. Sometimes change is slower than people think. The Boeing 737 is more than 50 years old, after all. But there are moments of disruptive change, and this is one of those moments.

It is not going to be dominated by a single invention or technological breakthrough.

Learning lessons from the car

In the years after World War 2, Britain embraced the motor car as emphatically as it abandoned rail travel. Between 1945 and 1970 the number of cars on our roads rose nearly tenfold.

Cars were new, shiny and aspirational. For the British people, coming out of a wartime environment, filled with desire for the new and transformative, cars were everything that other modes of transport were not.

They could live further from their place of work, consider jobs in other towns and cities, and still stay close to friends and family. In effect, cars created the suburbs and opened up the countryside.

For businesses, cars meant they could exploit a wider labour market. They could build offices at more accessible and affordable locations. They could send their sales reps to meet clients face to face around the country.

In short, travel was democratised.

It’s important to note that the triumph of the motor car didn’t arise from any single public or private choice. It arose from countless smaller ones. No one, certainly not in government or outside, had more than a tenuous grasp on how exactly transport would evolve.

Or how the growth of motoring would affect our society and environment and our wellbeing.

The trends were noted in some quarters, but that doesn’t seem to have counted for much during the 1950s when cars were flying out of the showroom at a time when Britain was the second largest manufacturer of cars in the world, behind only the Unites States.

These benefits were celebrated, and rightly so. But people were unaware of costs that only became apparent later.

The point about separation really matters. As you will know, I am someone who thinks a lot about norms and values in people’s lives as well as economics and politics. One of the worries I have is this: what does it do to an already individualistic society when someone is in a car in their own demarcated space surrounded by their personal area of control and not mixing with other people? Does it serve to encourage individualism, and if so what does that mean?

And of course this transition imposed huge externalities. Huge costs imposed on other people or other communities or other places, costs that were deferred or pushed onto others without any great recognition of what their effects might be.

So it’s really important to maintain a sense of history, to continue to look backwards, and to reflect on previous lessons learned as we seek to do great things in the future. 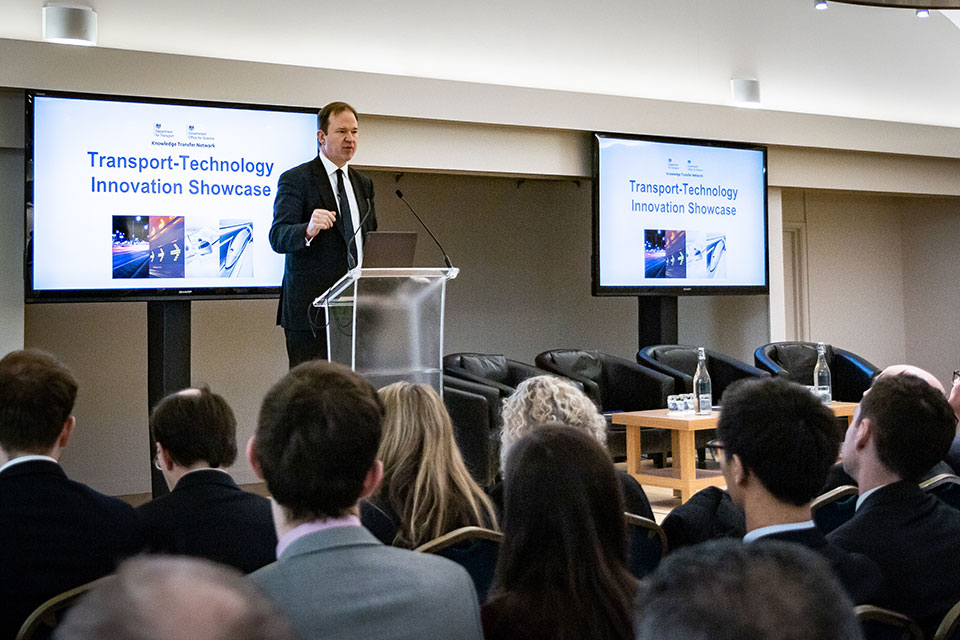 So the 20th century motoring boom left us with a mixed legacy – something in many ways to be excited about and proud of, but something that also contained real worries for the future.

But as we think now about the transport technologies of the future – electric cars, hydrogen power, autonomous vehicles, drones, the use of big data across the whole range of transport – we understand so much more about the complex interactions between transport and everything around it.

Yes, we have the same practical need to achieve greater mobility, as we did in the past. And yes we still want new technologies to provide us with fast, reliable, safe, affordable transport connections. These things haven’t changed.

Only this time, we can be much more explicit and self-conscious about the moral and political choices that come with those decisions.

We are in a kind of Burkean moment. Burke talked about past, present and future, generations that have passed away, those that are living and still yet to come, society as an inheritance that we receive, that each generation must cherish, must improve and pass on to future generations.

This is a Burkean moment for transport. We need to work out what we think about that, why it matters, what the drivers of change are, and how we can build a consensus that can sustain itself over time. And this is a huge challenge. A challenge for us in government, but also a challenge for you, a challenge for everyone.

We will move, if we do it right, from siloed thinking to a more integrated approach – integrated in terms of technology, geography, economics, sociology and culture.

To think about mobility in a different way.

We will think of it in part as more of a service, but that’s just one part of it. When we travel today we think about whole journeys, but now we can use technology to plan every part of that journey. When I came here today, I came on my bike – I’m a bike-o-holic – but I also took the tube. We think about passenger information and payment being merged together.

And when we do these things, we are seeing early signs of the future. We see mobility apps filling unused capacity, encouraging shared mobility, and reducing spikes in demand, so that we can all benefit from faster, more reliable journeys.

The key lesson remains, transport is not, and has never been, just about transport. It’s about better connected cities, and better housing. It’s about rural areas and rural connectivity. It’s about loneliness, more inclusive communities and more productive businesses. It’s about society and culture.

In government, we know that signing off a transport scheme today affects society in a vast number of different ways. This in turn raises questions of accountability, not just for use of public money but for the future – and whether we have thought about future generations and the impact of our choices. And it raises questions of how we support innovation – one of the things very close to the heart of people here.

We’ve already placed some significant limits on the use of internal combustion engines in transport, to control its harmful side effects. Now we have to decide what we want from emerging vehicle technologies.

How can we use policymaking to support wider goals of clean air, higher productivity, and more sustainable economic growth? And how do we bring these new technologies to market?

That’s the wider context in which this Foresight report is being launched. Foresight is a difficult thing to gain. Any help one can have in this area is important—to gain a foundation of understanding and evidence to inform our decisions and anticipate future trends.

Thinking about the changing cost of manufacturing, purchasing, running, repairing battery operated cars. All the things that it will mean for car owners, the motor trade, and those around them.

These three foresight scenarios are a really helpful way of helping us look at the different trade-offs and the agendas that could potentially dominate the public discussion.

Of course we intend to use the report, and indeed we will use it, as we reflect further on the Industrial Strategy we’ve launched. That strategy is an attempt to become self-conscious in some of the ways I’ve described today—about where we place our bets, and what we’re trying to achieve.

Some countries claim not to have an industrial strategy. But believe me, any one who says that has a strategy -they just don’t know it.

In the UK, we are investing nearly £1.5 billion‎ between 2015 and 2021 to support the growth of ultra low emission vehicles. But we have also spent £250 million up to 2021 to support more than 200 companies and research organisations developing technology for autonomous vehicles.

Because we want to build that next generation, next century research base. And our new Future of Urban Mobility Strategy which will come out in the next few weeks will do that from the point of view of cities.

But one thing that is really exciting to me – I come from a family of entrepreneurs – is to look at the different companies that are actually driving the change.

The car platforms which have historically been dominated by huge manufacturers are suddenly opening up. They are becoming platforms for technology on which smaller players, more entrepreneurial, more energetic players, can make a difference using better technology and communications.

We’ve seen some fantastic examples of that just recently at the Future Aviation Security Solutions event last week. At today’s innovation showcase you’ll see some of that innovation and energy at work, and it is profoundly exciting.

The Transport Technology Research Innovation Grant, and Innovation Challenge Fund have made a big difference in this area. We have funded 146 projects over the past five years.

More than half of T-TRIG awardees have entered into subsequent collaborations, and raised over £25 million extra from the private sector and other funding sources. Not huge numbers, but a very useful start.

For example, Tevva Trucks developed a system which allows diesel HGVs to switch to electric running in emission-controlled areas—a system which has secured a £12 million investment for Tevva from India.

Other beneficiaries of early DfT funding include Wayfindr – a charity which has developed an indoor navigation technology for the visually impaired.

And of course e-cargo bikes. We’re already thinking about how we can support and fund the growth of e-cargo bikes and a much greener and higher quality last mile.

Ladies and gentlemen, we have no time to lose. The pace of technology change can be very quick.

The first main passenger rail line between Manchester and Liverpool was opened in 1830. But it took just 30 years to complete the whole of the rest of the British rail network—10,000 miles of rail track built right across the nation, in just three decades.

Yes there was cut-throat competition and a certain amount of skulduggery. But there was also huge energy and creativity, and the great transport challenge we face is also going to be about creativity and energy, as well as nimbleness, imagination and technology.

So I am delighted not just to welcome you today, but to thank Foresight for the fantastic work that they’ve done. If we think about it hard, and we do it well, we can transform mobility in this country.

A Burkean moment for transport

Transport How long is that winch? Almost 300ft!!

Transport Earliest evidence of beer making found on major U…
0
✖