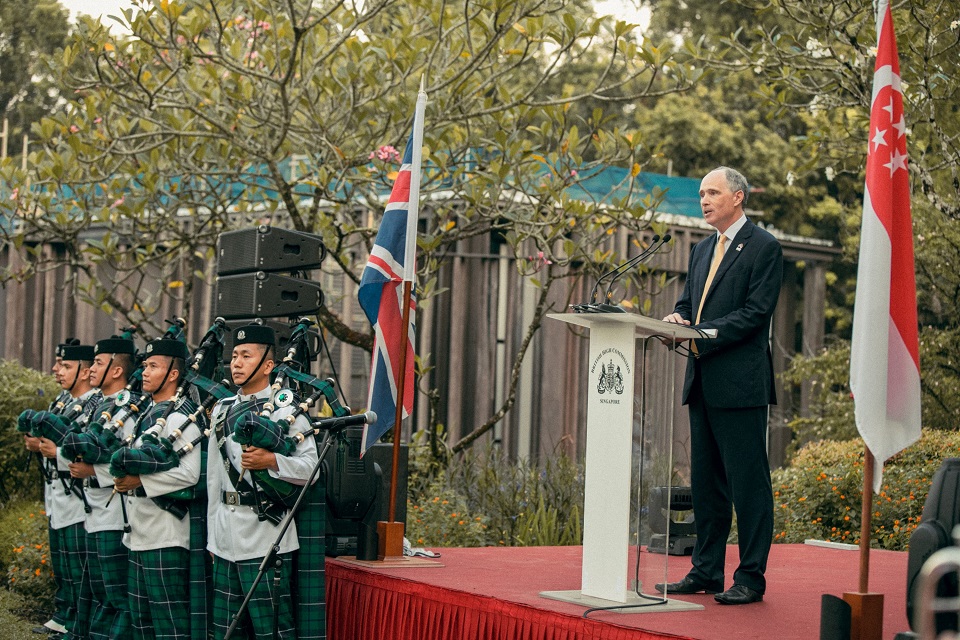 HE Scott Wightman at #QBPSG2019

Anne and I, and all of us at the British High Commission, would like to thank all of you for joining us this evening to celebrate the 93rd birthday of HM The Queen, who continues to give such dedicated service to the people of the United Kingdom and of the Commonwealth.

And to all our Muslims guests, I would like to wish you Eid Mubarak and Selamat Hari Raya Aidil Fitri.

All of you know that the UK is going through a period of considerable political uncertainty at the moment. It is at just such times that the importance of the institutions on which any nation is built come into sharp relief. We are fortunate in the United Kingdom that our institutions are strong with deep, often ancient roots.

Our Parliament, with its sometimes arcane customs and procedures, which allow issues of the greatest national importance to be disputed passionately in the Chamber with words and argument, rather than on the streets with stones and tear gas.

Our universities, at the cutting edge of science, educating young people from the UK and from almost every country on the planet, arming them not just with knowledge, but with the spirit of enquiry and challenge that drives science and society forward.

Our civil service. Professional, impartial, motivated by the spirit of public service. Our armed forces. Disciplined, highly trained, courageous, globally deployable, just like their forebears who landed on the beaches of Normandy 75 years ago to the day.

Our Courts. Objective, impartial, globally respected, the epitome of the rule of law. Our National Health Service, in which you Dr Puthucheary worked for many years, staffed by compassionate professionals, at the forefront of medical and surgical innovation, free to every one of our citizens.

But of course any institution is only as strong as the quality of its leadership. We see the difference this makes here in Singapore where, since independence, people eminently qualified in terms of character and ability have led its institutions and where Singaporeans face the happy prospect of that continuing in the years to come. We must all hope for those same qualities of character and ability for the leaders of all of our own institutions. And certainly in the UK we are fortunate that The Queen continues to embody these qualities in 2019, her 67th year as our Head of State.

2019 is of course a very special year for Singapore, as the country marks the 200th anniversary of the establishment of the trading post by Stamford Raffles and William Farquhar, a turning point in the island’s much longer history. It is an opportunity for the people of this remarkable country to reflect on what it means to be Singaporean. 2019 is also the bicentennial of the relationship between Singapore and the United Kingdom. And our Foreign Ministers, Dr Vivian Balakrishnan and Jeremy Hunt recognised this when together they launched our new SG-UK Partnership for the Future in January. Hence our theme of Partnership for this evening’s event. It’s been exciting to see how enthusiastically people and organisations in both countries have got on board with the initiative.

In the five months since its launch, there have been 130 branded events, involving almost 40 partner organisations. So far 14 Memorandums of Understanding have been concluded. More will be signed next week during the visit of Senior Minister Tharman to London, accompanied by Education Minister Ong Ye Kung and Senior Parliamentary Secretary, Dr Tan Wu Meng when the Lord Mayor of London will host a special event at Mansion House to mark Singapore’s bicentennial. 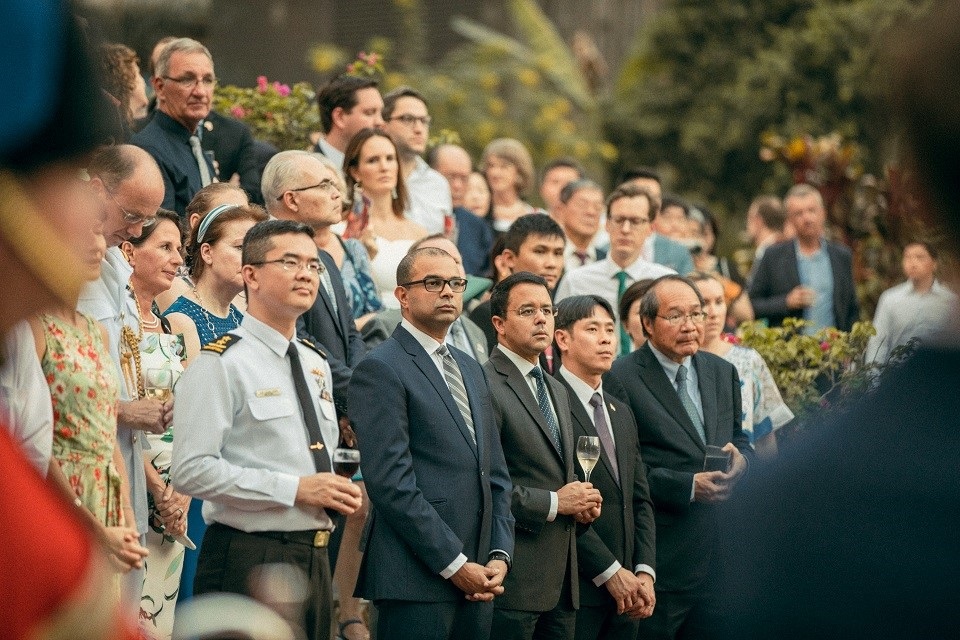 Esteemed guests at the #QBPSG2019

The hashtag SGUKpartnership has been used 13000 times on social media with 1.4 million impressions. I encourage you to add to those numbers this evening. The exchanges and collaborations under the four pillars of the Partnership – the digital economy; sustainable business and innovation; defence and security; and education, culture and youth – were already extensive but they have huge potential for further growth. And institutions like the University of Coventry are leading the way in seizing the new opportunities. They are collaborating with the Singapore Civil Defence Force and the Home Team Academy to make use of Coventry’s advanced digital training capabilities to train personnel in virtual disaster scenarios.

These growing exchanges have been underpinned by high-level visits in the last year. In addition to the Foreign Secretary, the Home Secretary, the International Trade Secretary and just last week our new Defence Secretary have all visited Singapore. In the other direction, Minister for Social and Family Development, Desmond Lee was in the UK last week and you yourself, Dr Puthucheary, explored the scope for even closer cooperation on cybersecurity during your recent trip.

We have also welcomed HMS Montrose, HMS Argyll and HMS Albion to Singapore, constituting a near permanent UK naval presence in the Indo-Pacific contributing to peace and security and the rules-based international system by enforcing UN sanctions, participating in exercises with our partners in the Five Power Defence Arrangements and with other friendly nations in the region, upholding the UN Convention on the Law of the Sea.

Each year collaboration on science and innovation goes from strength to strength. In September, we announced a £10m joint research call on quantum key distribution. And just last month, we announced £2 million of joint funding to support some of our most exciting SMEs to work together to develop new ideas in medical technology, smart mobility and logistics, and advanced manufacturing.

Next month the 4th ConnectGov Leaders Summit, hosted by the CIO Academy of Asia Singapore, will take place in Edinburgh bringing together senior government and industry thought leaders from Singapore and the ASEAN region, one of Europe’s leading AI and data analytics hubs.

These are all great examples of how our two countries are working together on the grand challenges set out in Singapore’s Future Economy programme and the UK’s Industrial Strategy. Reflecting a shared commitment to embrace the digital and data revolutions; to upskill our people; and to be open to ideas, to trade, to investment and to talent. The Future of Work and the Future of Trade are central to the work of the British Chamber of Commerce in Singapore. I want to thank the Chamber for the fantastic work they do for British business and for the support they give to our Department for International Trade and the High Commission. And I would like to pay tribute this evening to Dr Bicky Bhangu, who will step down later this year as President of the Chamber for the time, energy and commitment he has given over more than three years as President and many more than that as a Board member, all while providing great leadership for Rolls-Royce.

BritCham’s contribution to the trade and investment relationship between Singapore and the UK is immense. Like the British Council, they are great partners for us. Many of its members are supporting this evening’s event. Their names are listed in your programme. I want to thank all of them for the generous support but in particular our premium sponsors, Rolls-Royce and MET Studios. 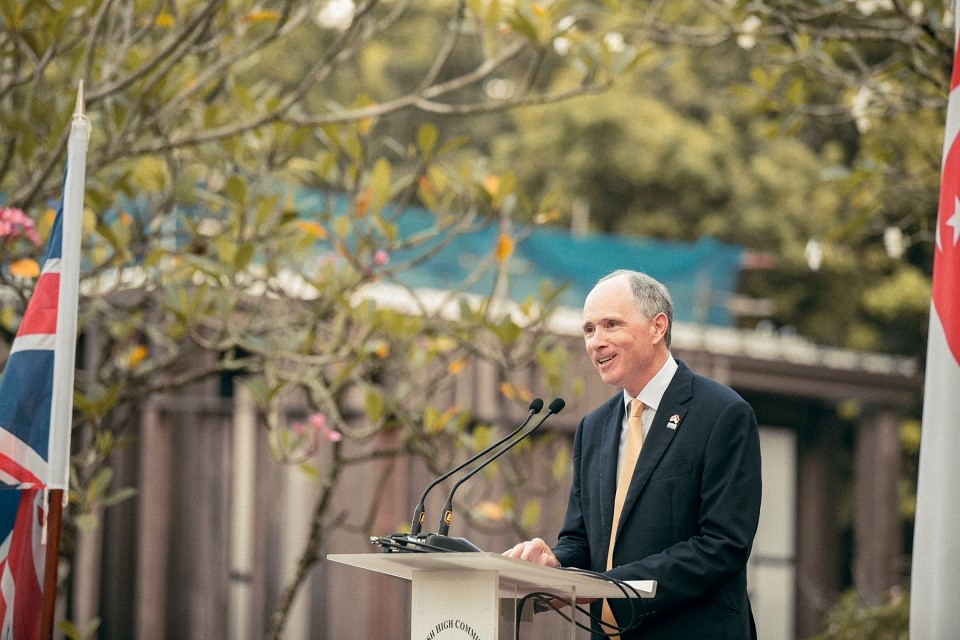 HE Scott Wightman at #QBPSG2019

And I hope all of you will enjoy the great British premium food and drinks which several suppliers have donated. They are among the over 4000 British businesses with a presence here in Singapore. And that number grows every day as more and more great UK businesses see the enormous potential of this region. And more and more businesses in Singapore and the Asia Pacific understand that companies from the world’s fourth most innovative economy – the UK – are developing the technologies of the future that will power their own growth. I would also like to thank the British Club for helping our own team with the catering this evening. And I take this opportunity to recognise the Club’s President, Damian Hills, who at the end of the year will step down after giving a huge amount of his own time in service of the British community.

Tonight’s celebration is pretty much Anne’s and my final official engagement before we leave Singapore next week. It has been a huge honour for us to represent our country here. We have had four wonderful years, during which we have explored every part of Singapore from Sungei Buloh to Semakao and from Tuas to Pulau Ubin. We have made many friends. It is always hard to leave.

But we will be back and it is satisfying to know that over the last four years, the unique relationship between Singapore and the United Kingdom has grown even stronger.

I want to thank all of you here this evening for helping to make that happen. But I hope you’ll allow me to pay a special tribute to all of my fantastic colleagues at the High Commission and here at Eden Hall. I could not have asked for more from you.

My successor, Kara Owen, will inherit a great team when she arrives here later this month. And thank you Anne for being with me every step of the way.

Senior Minister of State, Members of Parliament, Attorney General, Rear Admiral, Your Excellencies, Ladies and Gentlemen, I would like to close by thanking the people who have worked so hard to put on this evening’s event: The Gurkha Pipes and Drums, the Singapore National Cadet Corps Command Band and the musicians from the Nottinghamshire Royal Engineers Band and the King’s Band, the wonderful MINDS drummers who greeted you on the driveway, my colleagues at the High Commission and the British Council, but above all, thanks once again to all of you for helping us to celebrate HM Queen Elizabeth’s 93rd Birthday this evening.

Senior Minister of State, Members of Parliament, Excellencies, Ladies and Gentlemen, it gives me great pleasure to propose a toast to Her Excellency Madam Halimah Yacob, President of the Republic of Singapore.

International Affairs Change of Her Majesty’s Ambassador to Kosovo &#…